Should the Rangers trade Adrian Beltre?

Share All sharing options for: Should the Rangers trade Adrian Beltre?

The 2014 Rangers are an apple pie that a truck backed over. The 2015 Rangers should contend. The Rangers should probably explore the idea of an Adrian Beltre trade.

All of the above are true. Especially the part about the apple pie. You were totally looking forward to it, then it was completely ruined as you watched in horror. Watching every subsequent Rangers game is like three hours of your dumb friend Beavis giggling and daring you to eat it. So it makes sense that the Rangers are selling, and selling hard.

But they're not selling that hard. They're not trading Yu Darvish, and they're likely not trading Beltre. Keeping Darvish is an idea so obvious, it doesn't merit more attention than this lonely sentence. Beltre, though, is a fascinating trade chip. He's an All-Star who's almost certainly going to finish with MVP votes again, and he's under contract cheaply for the next two years. He's also 35, but the 2016 part of the deal is voidable if he misses substantial time to injury. Teams would light their farm systems on fire to get him.

Should the Rangers consider it, though? Let's do a little point/counterpoint with the idea.

The Rangers aren't rebuilding. They're as surprised as us that they're awful, and almost all of it has to do with the piano that fell on them. The 26 consecutive pianos. It's been a horrific, unpredictable year of injuries for them, and the only good news is that the wins and losses will reset and go back to zero for everyone in three months. The talented, injured players should return, and when they do, it would sure be nice to have one of the very best third basemen in the game.

A partial list of things the Rangers are hoping for:

None of those scenarios are unrealistic, and the wishes and crossed fingers will be buttressed with trades and free agent signings. A new catcher would help, as would an additional starting pitcher or two in the rotation. But it's not insane to think the Rangers could be where the Angels are now. They have a head start of a young, talented middle infield and the best pitcher in the league.

It's not going to take divine intervention to get them back. Just medical intervention. When it happens, Beltre will help. He should be their best position player yet again, and stars are hard to find. You can't just pay Shin-Soo Choo money and expect to find another star. You might not even get the real Shin-Soo Choo.

1. Prospects. Sweet, sweet prospects
Who might never pan out. And the Rangers would run the risk of doing what the Twins did in 2008, when they traded Johan Santana away and lost the division by a Johan-sized margin the next year. The Rangers could get majors-ready prospects for Beltre, though, that would help ease the pain of losing Alex Rios in a trade, or who could otherwise help them contend in 2014.

Beltre's the safer play. But there are scenarios -- more than a few -- in which the Rangers get better without him.

2. A less confusing infield situation
With Beltre, the Rangers will have to find at-bats for Elvis Andrus, Jurickson Profar, and Rougned Odor next year. Without Beltre, they'll have more good players than open spots, which is a good problem to have.

3. He can't do this forever, right?
He'll be 36 next year, which is when hitters fall into a hole and never emerge. Great third basemen like Mike Schmidt, George Brett, and Wade Boggs had about one good year left at this age. Others, like Eddie Mathews, were cooked. Let's look at Ron Santo's comparable players by age at Baseball-Reference.com: 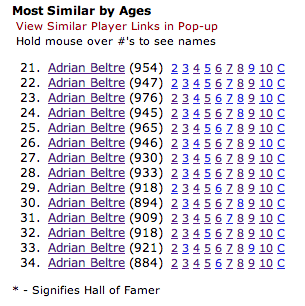 Obviously, Santo is a wildly imperfect comparison considering his health issues, but the overall point stands. Nothing in baseball is a sure thing, but that applies doubly so to players in their mid-30s. This is probably as valuable as Beltre will ever get, both on the field and in trade value.

Add it up, and there's a slightly stronger case for trading Beltre than there is against. Except ...

Now find a match for Beltre on a contending team.

A's? They have Josh Donaldson. The Angels and Giants don't have the farm system, even if they wanted to get Beltre. The Tigers have Nick Castellanos and other concerns. The Dodgers could make something work, but they have Juan Uribe doing well already. The Cardinals could move Matt Carpenter back to second, but they probably don't want to. The Brewers have Aramis Ramirez, and the Pirates have Pedro Alvarez.

Orioles, Blue Jays, Reds Mariners, Nationals ... all nopes. The Braves might be sour on Chris Johnson, I suppose.

It's basically the Yankees, who aren't overstuffed with Grade-A prospects. The Yankees and maybe the Braves and Dodgers. There's a way to get the right package in a deal with one of those three teams, but it's not as simple as yelling "BELTRE FOR SALE" and automatically getting two or three top-100 prospects. Even if the Dodgers or Yankees are interested, one of them's probably shipping some of those prospects away for David Price.

The Rangers should explore an Adrian Beltre trade. They should also prepare to be disappointed with the findings of the commission that explores a Beltre trade. The fallback scenario has the Rangers keeping one of the better players in baseball around for next season.

There are worse fates.