The Rays' 4-pound burger is impossible to eat

Share All sharing options for: The Rays' 4-pound burger is impossible to eat

Not every massive ballpark concession needs to be taken back to your seat for consumption. Restaurants and pubs are open within stadiums these days, so you don't even necessarily need to go to the game in the way nature intended: you can sit inside a restaurant watching on television while you wait for your order to come out. Sure, it feels wrong, but it's the price you pay for experiencing enormous (arguably over-sized) ballpark food.

In this particular case, I went to the Brew House at Tropicana Field, home of the Rays, for their signature item. It's probably best if you see it so you can process it before I tell you what it's made of:

That's the Rays' "Fan vs. Food" burger, and it weighs four pounds. It's supposed to come with a pound of fries as well, but take it from someone who has seen two pounds of fries on their plate before: that was closer to two than one, so apparently the Marc Normandin Edition of this challenge comes in at nearly six pounds. Thanks?

Oh, yeah, it's a challenge, where you have to consume that entire burger and all of the fries. The prize? Two tickets to a future Rays' game and a t-shirt, presumably to replace the one you soiled while shoving burger in your face. There's one minor detail working against anyone trying this, besides the fact you have to eat five pounds of food, I mean: you have just 30 minutes to clear your plate. Now, I've completed giant burger challenges before, and one of them involved four pounds of food -- that's why I know what two pounds of fries looks like on one plate. I had never attempted a four-pound burger, though, nor a five-pound challenge, and given the nature of this series, it just seemed right to head to St. Pete for Fan vs. Food to give it a shot.

In my previous four-pound experience, I had a full hour to finish the burger and fries, so while I knew I could find a place for that much food inside me, getting it all there in 30 minutes was the real problem. 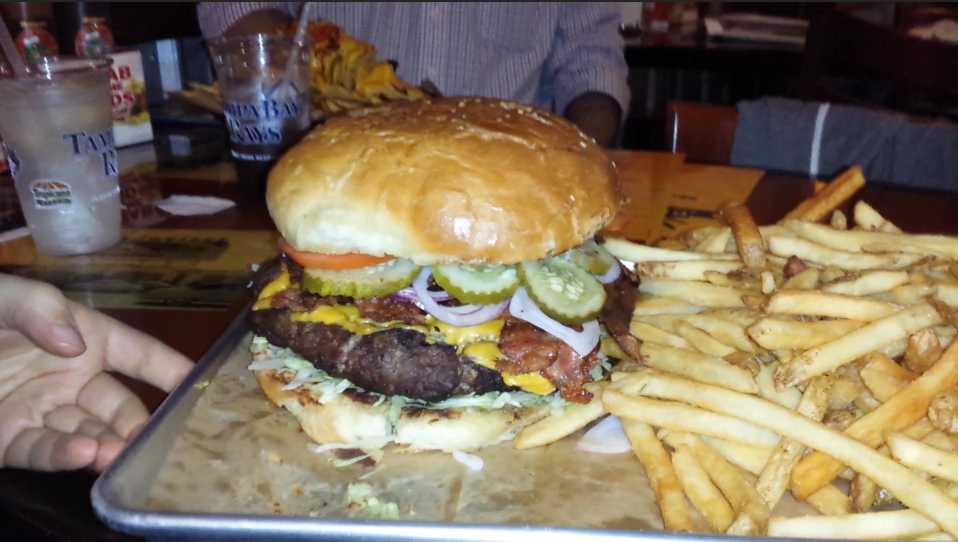 Along with me for the ride were DRays Bay editor Erik Hahmann, as well as Rays' fan and ESPN contributor Tommy Rancel. Yes, the burger was large enough that it necessitated two photographers/people to laugh at me.

This challenge is only in one place in the ballpark, the aforementioned Brew House. The problem is that no one else in the stadium knows what the burger is or where you can find it, and Google was not as much help as we would have liked. We did a few laps around Tropicana's concourse before finally finding a restaurant that looked promising, and the waiter there knew just what we were looking for. It took longer than it should have, but from there on out, getting the gigantic burger put in front of me was easy.

The Brew House staff let me order the burger immediately before finding a seat, as they said it would take 20 minutes or so to prepare. That gave me a chance to sit and look at the menu, and find out the exact ingredients for the burger:

There was also an entire tomato sliced up, an enormous helping of pickles, at least half a sizable onion, and something that probably used to be lettuce before it was mixed with the rest of all this mess. That's less cheese than I expected, but probably still more than I needed. I should also point out that while this giant was $30, the regular burger here was $14. This thing was a relative bargain, if you don't count the time it takes off your life as currency.

It took the promised 20-ish minutes to prepare, and then the waitress prepared to set a 30-minute timer on her phone after bringing the monstrosity out to the table.

Burgers are delicious when done correctly, but there is so much room for error on a regular-sized one, never mind one with two pounds of beef in it. The first bite wasn't a full indication of what was to come flavor-wise, but at least I knew the outside of the burger would be easy to tackle after going in:

That's two tables full of people who stopped what they were doing to watch me try to eat a giant burger, if you're wondering what all that noise is.

It wasn't bad! The outside of the burger was grilled and seasoned, so the first bite and ones following it were tasty. The existence of the pickles, tomatoes, onions, and so on also helped, as there was a whole lot of beef here, and variety was necessary if I was going to get through it.

You can see it in the video, but the bottom bun of the burger started to fall apart before I even took a single bite. I lost little chunks of it here and there as I progressed, and you can see how much more abuse it was taking than the top bun -- which I couldn't even get to for the most part given the height of the burger -- at about the one-third to completion mark: 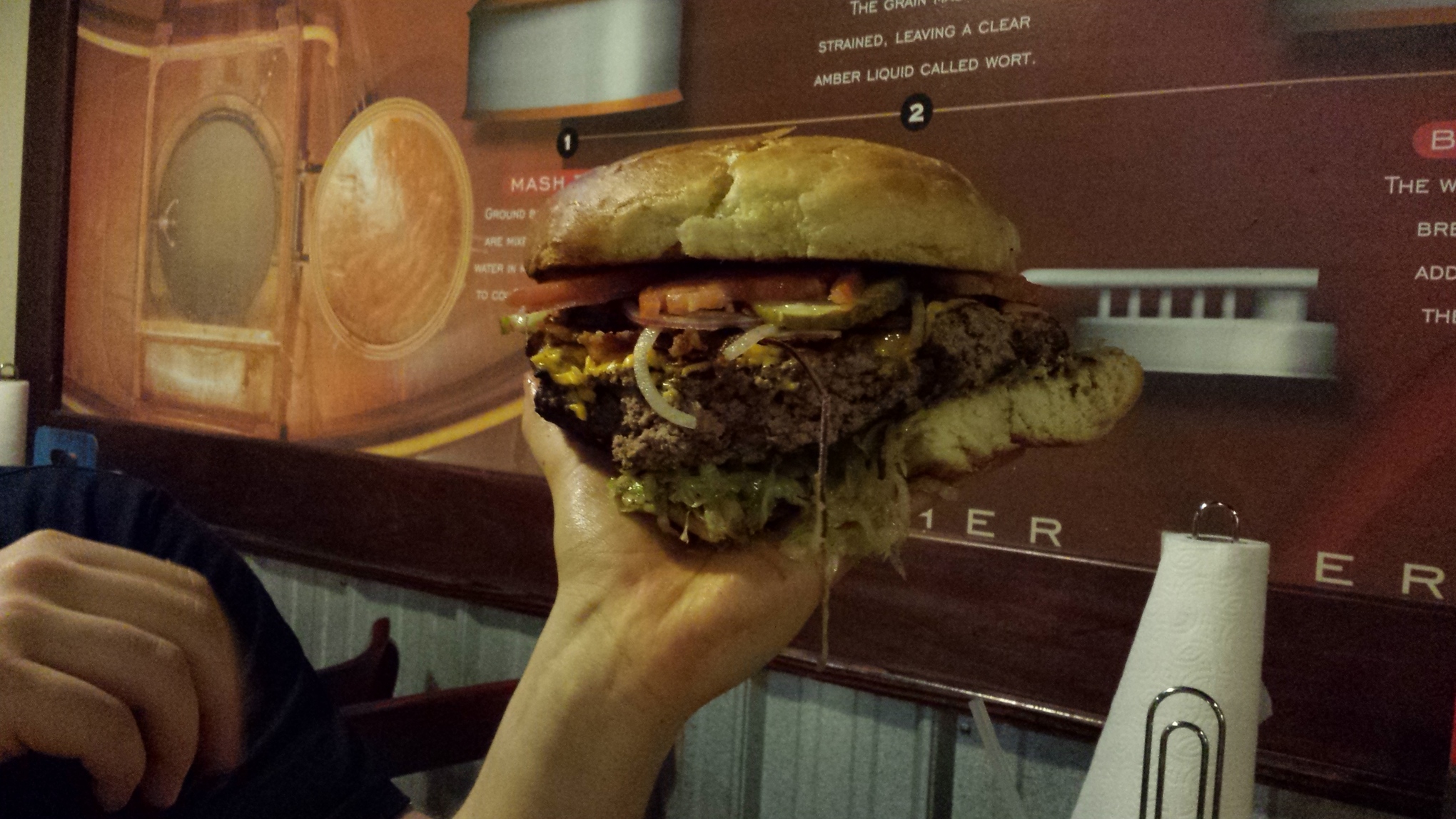 At this point, though, I was just thankful I could balance this thing in one hand.

Eventually, the bottom bun became useless and more in the way than anything, so it was cast aside and the burger flipped so that the large top bun was the new safety net. Top and bottom buns are designed the way they are for a reason, though, and this plan only worked for so long before the entire thing fell apart in my hands and landed back in the tray as a burger no more: 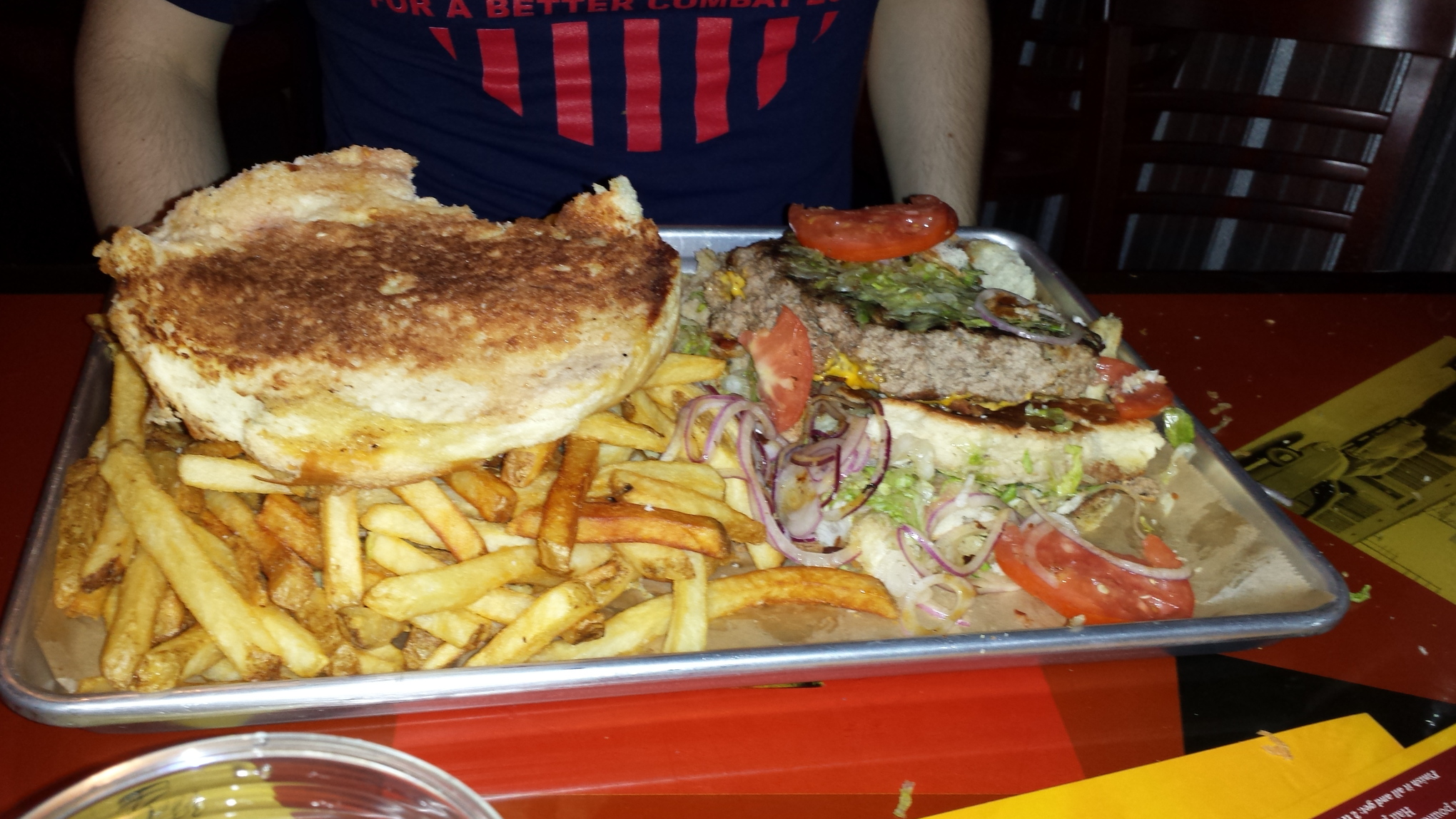 So, my bun was useless, and there was still a lot of food left. Not as much as there had been, though, and that's what mattered.

Earlier, when I was saying it's easy to screw up a burger? That was foreshadowing. The outside of this burger was seasoned enough and grilled so that it had that burger-on-a-grill taste I love, but there was far more beef on the inside that was not seasoned well, and did not have the luxury of touching the grill. About 15 minutes in, my stomach started to let me know that if I put anymore of this unseasoned burger in my mouth before I completely finished chewing what was already in there, there would be trouble.

Marc Normandin tried The Closer -- the Pirates three-in-one grilled cheese sandwich -- and defeated it. He also loved the sandwich and would like to always have one nearby.

That's where the bacon came in. Mixing bites of beef with strips of bacon helped push me through what were otherwise flavorless chunks. The pickles and onions were also effective until they ran out, and the texture (and water!) of the tomatoes were also a blessing, but bacon saved the day. I just tried not to think about the fact that half-a-pound of bacon was also half of a package of bacon and that I was eating it on top of all of this cheese and beef and fries.

The fries should have been a quality change of pace from the beef, but they went cold fast, and, to be kind, weren't great. I picked at them as needed to rotate through tastes, but even if I finished the burger, my early reactions from the fries were telling me there was no way I was clearing the whole plate in 30 minutes.

Time was winding down, and so was my desire and ability to consume more of the beef part of the burger. I had put a serious dent in it, though, even if it's hard to tell through the chaos of this plate: 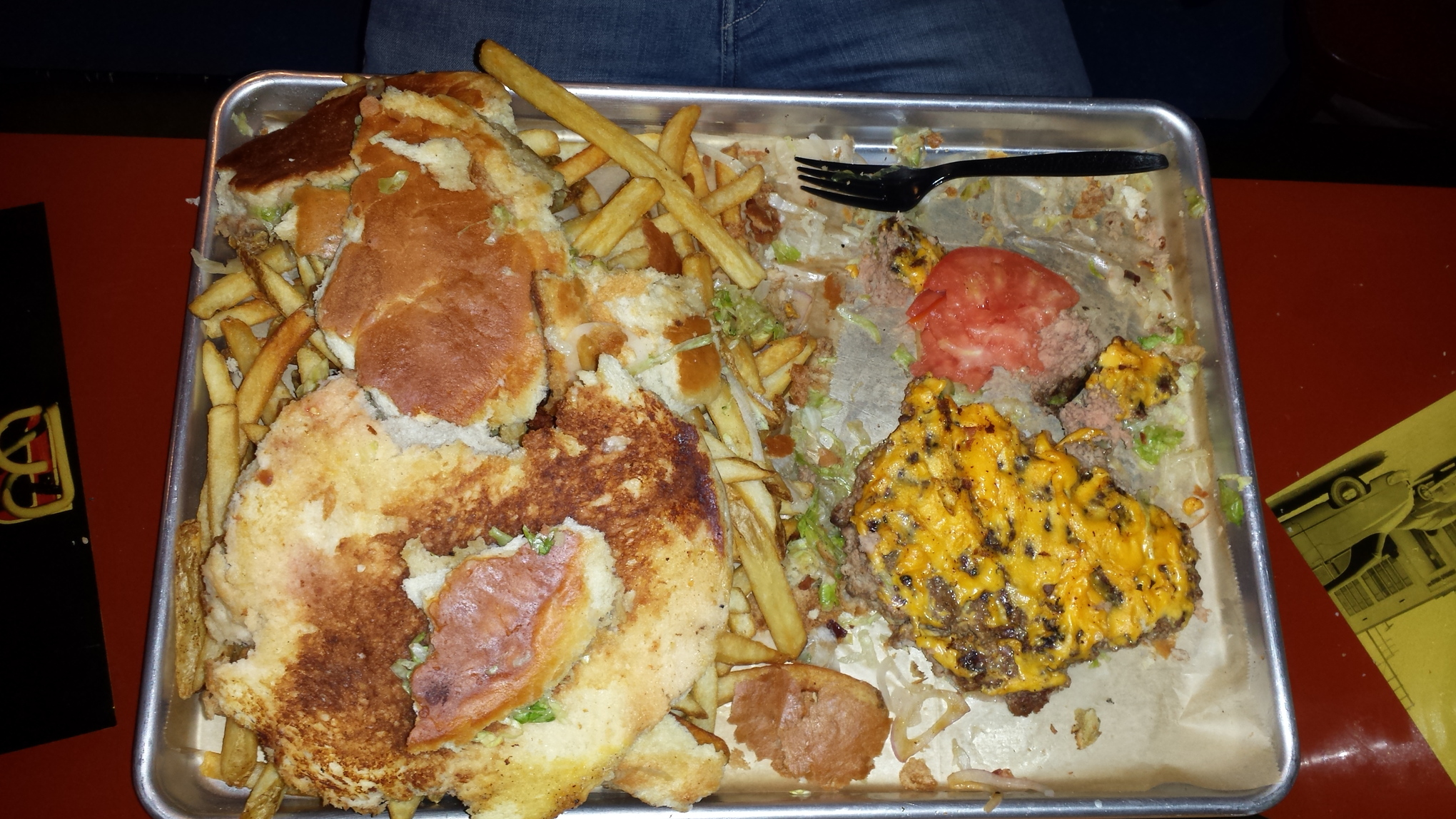 Save a scattered onion and one slice of tomato, everything non-beef inside the burger was finished. Less than half-a-pound of beef remained, as well as whatever bits of cheese were still clinging to the remains. The bottom bun was almost all finished off, but the massive top bun was still sitting there on my plate, and would remain until the staff cleared it off. I finished maybe two-thirds of the burger, and picked at the fries, and then it was time for the buzzer and the final bite. 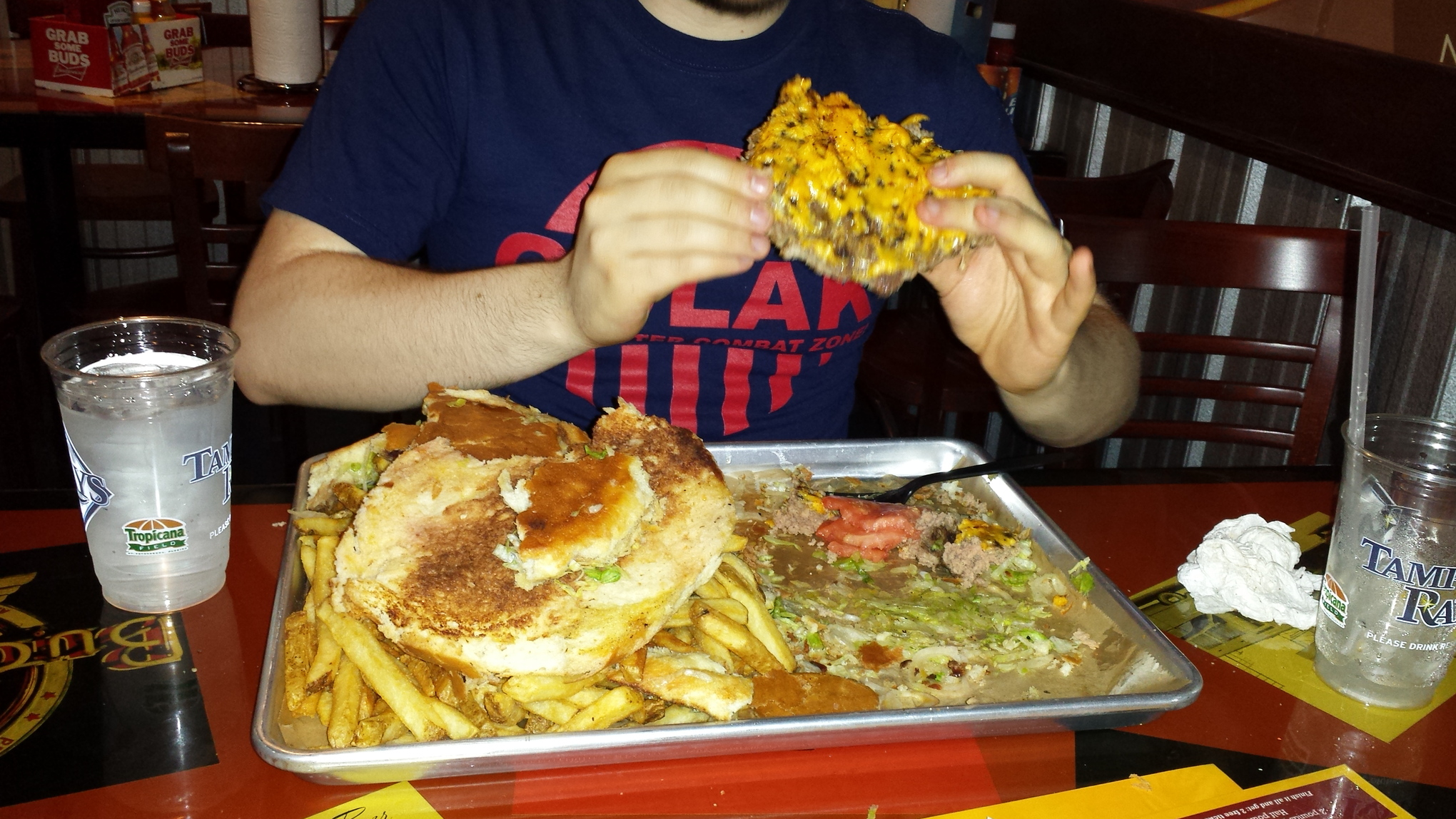 I didn't take the rest with me to my seat, because as was mentioned, the fries were cold. With the challenge over and my freedom secured, I went off looking for a local beer to wash it all down, and some baseball to help me forget what I had just done.

I made one crucial mistake that slowed me down. I wouldn't have finished everything, but more of the bun and all of the beef could have been taken care of if I had decided to use some kind of sauce or even ketchup available at the table to help change the flavor of the beef. Instead, I went after the non-beef parts just to make sure as much was consumed as could be, but I probably could have eaten all that with the beef if I had just squirted some necessary flavor onto the flavorless, well-done hunk of beef before me.

That might have also been a mistake. I never told them how I wanted it prepared, as I worried that going too low on the scale would result in a well underdone burger. I'll eat a steak straight out of the package, but beef -- especially the kind likely used in a four-pound setting -- isn't necessarily of the quality you want to be underdone by too much. I'll never know, but I might have been able to get through it a little less listlessly at the end if it was a juicier, less-cooked slab.

I felt better about not finishing the whole thing after it was over, at least, as the wait staff made a point of telling me a few things. First, only two people have ever finished this four-pound iteration of the Fan vs. Food burger: it used to be a two-pounder before they decided that wasn't enough, and now it might be just a little too much. Then they decided to tell me that I got further than most, as nearly all of the people who attempt the challenge get to around the quarter-mark of just the burger before giving up.

That half-hour time limit is killer.

It's worth attempting the Fan vs. Food burger challenge for a few reasons. For one, did you hear that crowd of people cheering in the first bite video? You can buy that kind of ego boost for the low, low price of $30, and it comes with five pounds (or six, in my case) of food to boot. I'm still in shock that this was just $30 -- the beer I ordered after cost more than one-third that before I even tipped, and I didn't get a 32-ounce beverage for that money.

Like with the Rangers' Choomongous, it's a story to tell and an experience to have, even if it you end up in pain or lethargic by the end of it. I wouldn't bother trying again, though: I've completed a few burger challenges over my years of irresponsible eating, and that 30-minute barrier likely makes this impossible for me to finish. Maybe, if prodded, I'd give it a shot again just to see if I could eat everything on my plate eventually, but it's probably for the best for both my health and my dignity if I don't.

Plus, there are other enormous ballpark foods in other cities to eat.