Once the train pulls out of the station, the seats have lost their value.

We have many metaphors for anticlimax. Sometimes I wake up early on a Sunday morning and think, "I will be Superdad and take my kids out for pancakes!" I am goofy for pancakes, not nearly as much as I am goofy for my kids, but close. I prepare to rise, but then I run through the local pancake options, realize I have a choice of National Pancake Chain that Doesn't Actually Do Anything Well, another chain that isn't much better, and a diner that makes their pancakes out of the same material Wham-O uses for its Frisbees. Reluctantly, I conclude that Superdad will take his kids out for lunch instead and go back to sleep.

Trading for Chase Headley in 2014 seems kind of like that. Now 30, Headley has seemingly been the subject of more than his RDA of trade rumors virtually since first breaking in the majors, when he was playing left field so that Kevin Kouzmanoff could play third base (think about that). Now it's finally happened, but at a point in time when Headley is having his second off year in a row and injuries may have placed seasons like his 2012 (.286/.376/.498, neutered by Petco Park; he hit .300/.395/.541 on the road) beyond his reach.

The Padres apparently saw Headley as a career player and hoped to sign him before he reached free agency at the end of this season but never could, a strange position to take given just how dead in the water this franchise has been since 2010, how little they have done to correct it, and their ongoing trajectory to nowhere fast. Even allowing for their tough ballpark, the offense is flirting with historic greatness at making outs. They are making deals like this one and last week's Huston Street deaccessioning with no set general manager, only a committee of pinch-hitters that includes A.J. Hinch and Omar Minaya, whose tenure with the Mets was the stuff of disaster films. Given the existence of the Wilpons that description might be entirely unfair to Minaya, but still -- even before he got to the Mets, this was the cat who authored the Bartolo Colon-for-three-future-All-Stars deal.

Yankees make the trade, should stop there

Despite myriad injuries and disappointing performances by veterans, the Yankees have hung in the AL East race. While they still have a chance to win a weak division, they need their prospects more than a shot at the title.

The Yankees have been after Headley for years. They eventually acquired him for pennies on the dollar, which wasn't how it was supposed to be.

Yankees make the trade, should stop there A sad history of Headley trade rumors

As of 2014, if not last season, Headley has been more part of the problem than part of the solution. As Grant Brisbee pointed out here earlier on Tuesday, the Padres were so focused on retaining Headley as a building block to what turned out to be nowhere that they somehow overlooked the possibility that he could also be used to jumpstart a team that, even in 2012, had very little going for it, particularly in the case of a starting rotation that was entirely notional. Padres starters had a 4.44 ERA that year with the park. If you'll forgive the slightest, tiniest bit of hyperbole, that same rotation in Coors Field would have had an ERA of about 7.00. That's hard to do and not easily fixed. Two years on, they're still trying.

A few years ago, member of Congress got very angry at Amtrak because they were incentivizing ticket-buyers to make last-minute purchases by heavily discounting seats close to departure time. Since Amtrak is subsidized by the government, said Congresspersons felt that the railroad was cheating itself and the people out of the greater revenues they might have had if they had only stuck to their full prices. But what Amtrak apparently understood, and what the knee-jerk reaction from mass-transit haters missed, is that train seats lose all value once the train leaves the station. Better to fill an empty seat for a dollar, quarter, or penny than have it vacant and get nothing. Yes, you have to balance the timing of the sales so you don't undercut your regular prices completely, but the ‘road was pursuing an entirely rational strategy.

Baseball players are like that too. If you've followed the Yankees at all, you know that prior to their early 1990s crash, George Steinbrenner more or less prohibited, in effect if not in actuality -- the use of young players. If you had looked at the Triple-A Columbus Clippers in those days, it seemed like the same players were there year after year, slowly turning into rotten produce. The major-league shortstop Royce Clayton (1991-2007) had an older brother named Royal, a right-handed pitcher the Yankees picked up in the 18th round of the 1987 draft. As his draft status and strikeout rates suggest, he wasn't very much of a prospect, but nonetheless, he pitched effectively in the minors, compiling a career record of 80-53 with a 3.43 ERA.

Despite his relative productivity, the Yankees led him on a desultory trip through the minors. Drafted at 21, he went 16-4 with a 2.98 ERA at Double-A as a 23-year-old in 1989. He probably had some little trade value at that point.

That might, might be the Chase Headley story as well, but at the major-league level. Knee problems sapped his productivity last year. This year he's had back problems. Mark Feinsand of the New York Daily News quotes Yankees GM Brian Cashman as saying Headley's offense had improved since he received an epidural on June 20. That is true, to a point: hitting .200/.283/.333 through that date, he took the shot, sat for four games, and has hit .298/.330/.405 in 88 plate appearances since returning. He's also struck out about a quarter of the time and taken only four walks. Even if he's healthier than he was, this is still not the Headley of just a couple of years ago. 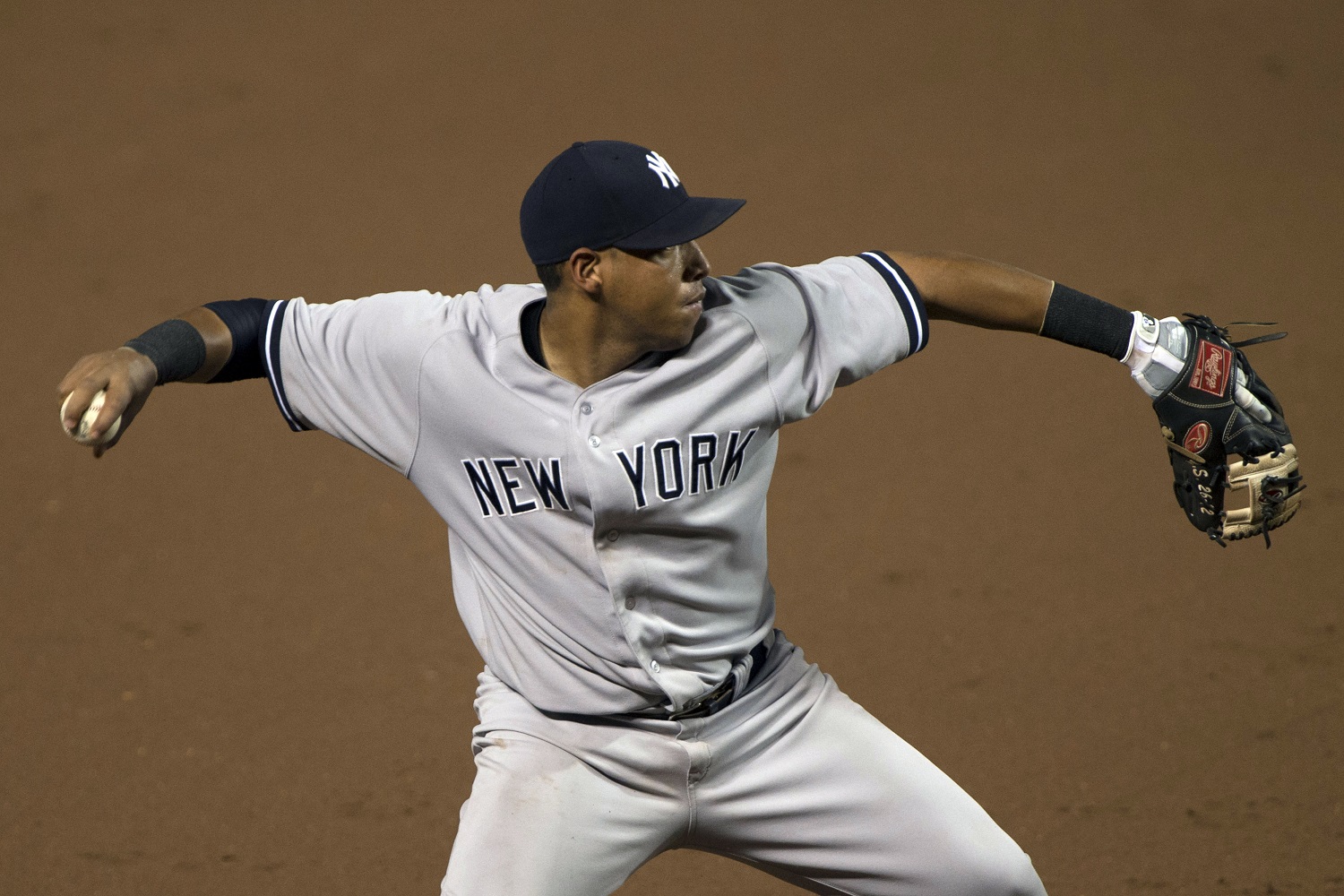 If you're the Yankees, it's a fascinating gamble: You didn't give up anything of great value -- a found utility player (at best), an arm that might be something one day but also very possibly won't be, and you even got paid -- but Yankees third basemen have also hit .261/.331/.395. That's not Mike Schmidt (or Mike Pagliarulo) territory, but it's actually a little better than league average at the position. If Headley really isn't the guy he's been the last 88 PAs, well, they actually just traded down, the possibility of improved defense notwithstanding. Parenthetically, some defensive metrics like Headley's glove this year and others don't, but try to hold the two thoughts "third baseman with bad back" and "third-base defensive upgrade" in your head at the same time without inducing cognitive dissonance.

Nevertheless, no matter how coldly realistic one is about this deal from the pinstriped point of view, it's hard to see it as a bad gamble. As I suggested earlier, the Yankees can't afford to trade any of their real prospects for improved pitching or a big right field/DH bopper (neither of whom might be available right now anyway given a degraded Cliff Lee), so fishing off the fixer-upper pile is probably not only the best policy, it's the most assertive thing they can do without damaging the franchise in the long term, thereby leading to signing whoever the Carlos Beltran/Ichiro Suzuki/Brian McCann of 2015, 2016, and so on, forever and ever, amen.

As for the Padres, they've dealt Headley and Huston Street, Joaquin Benoit will probably go next, and there have been rumors about Chris Denorfia, another guy who almost certainly should have been dealt after 2012. He's 33 now and he too seems to have hit a wall. If they can, they'll trade the office furniture, although the lease on that is probably past due.

Whenever they do get around to finding their next general manager (earlier today Peter Gammons tweeted, "The Padres' process is meticulous, focused on the International market, and when Mike Hazen's second interview is completed today they'll... [strike like a cobra]." Actually, what he said was, "have a pretty good idea of their choice," which sounds more Padres-like. Whichever of the four finalists gets the position, that person had better be a genius, because this club has a long road back.