How the Rockies' front office works: A guide to dysfunction

Nobody knows what's going on in the Rockies' front office. It's been that way for years, and it doesn't appear things are changing anytime soon.

Share All sharing options for: How the Rockies' front office works: A guide to dysfunction

Since the Colorado Rockies' last winning season in 2010, they've gone through two managers, won fewer than 43 percent of their games, and fielded what has evolved into the worst pitching staff in the majors. Most non-rebuilding teams, in the event of a similar situation, would have made significant front-office changes in the midst of such futility, but the Rockies are not most teams.

In this context, that isn't a good thing, and it only begins to scratch the surface of Colorado's deeply rooted problems.

During a disastrous 2012 season that saw the Rockies eventually lose a franchise-record 98 games, a strange series of events, which included general manager Dan O'Dowd offering to step down, culminated in the club's decision to adopt a tandem GM system of sorts. Bill Geivett, who had served as O'Dowd's top assistant since 2005, was promoted to director of major league operations, with O'Dowd remaining general manager but shifting his focus to player development and roster construction.

Tandem leadership in baseball isn't a bad thing on its own. Several teams -- most notably, the White Sox and Cubs -- employ a similar system. But what sets the Rockies apart is that Geivett actually has an office in the clubhouse. That can't make players comfortable, and it certainly has proven to have a negative effect on the field manager. Jim Tracy resigned after the 2012 season, citing philosophical differences with his superior, and it would surprise absolutely nobody if those differences centered around not wanting to be micromanaged. 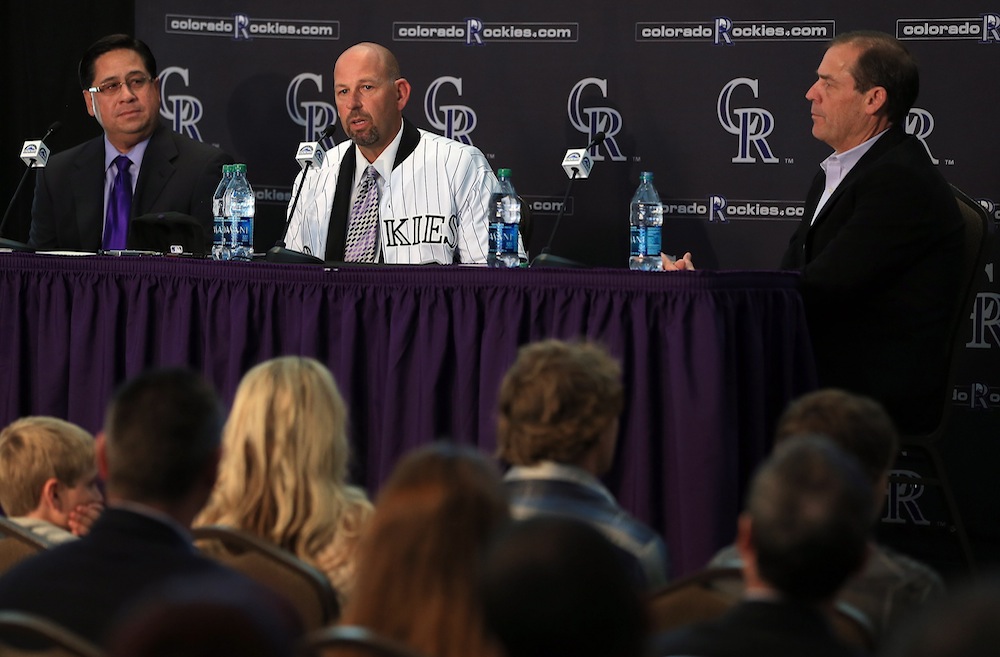 Two years later, Walt Weiss is similarly unhappy with Geivett and the Rockies' front office according to Fox Sports' Ken Rosenthal. That news comes on the heels of comments from Rockies owner Dick Monfort last week on a Denver radio station in which he blamed Geivett for the team's poor record.

It appears the writing could be on the wall for Geivett, but what about O'Dowd? Why is he seemingly allowed to get off scot-free?

"I don't even know who's the GM. I think everybody over there is still wondering who really is the GM ... Dan and (Geivett) are just both coexisting." -Former Rockies outfielder Dexter Fowler, to the Houston Chronicle

By all accounts, O'Dowd, who has been with the Rockies since 1999 despite never fielding a division-winner and having only two playoff appearances under his belt, is still the primary decision-maker in Colorado's front office when it comes to baseball-related things. He's listed as the GM on the Rockies' front-office roster on the team's official website, and beyond that, he's the man who laid out Colorado's plan for the near future in an interview with former Denver sportswriter Dave Krieger last fall -- an interview that revealed the club's sour opinion of Dexter Fowler, who was dealt to the Astros shortly thereafter. Fowler responded to O'Dowd's criticism by bringing up a valid point to Evan Drellich of the Houston Chronicle: nobody even knows who is in charge of the Rockies.

"I don't even know who's the GM. I think everybody over there is still wondering who really is the GM ... Dan and (Geivett) are just both coexisting."

The sentiments of Houston's center fielder echo those from others in the industry. As recently as last season, some opposing executives weren't sure who to contact in the Rockies' front office regarding trade discussions and other functions normally handled by general managers.

Fowler is hardly the only former Rockie who has been a victim of O'Dowd's public tongue-lashings over the years. Seth Smith and Ian Stewart were the subjects of his wrath after the Rockies' disappointing 2011 season, and both players were traded shortly thereafter. A year earlier, O'Dowd didn't like what he saw from Ubaldo Jimenez after his Cy Young-caliber 2010 season and decided to let everyone know about it. Similar things have happened in recent years with Jhoulys Chacin, Drew Pomeranz, Christian Friedrich, and others. Simply put, O'Dowd has no problem throwing his players under the bus despite his own extensive list of shortcomings. Here are just a few: 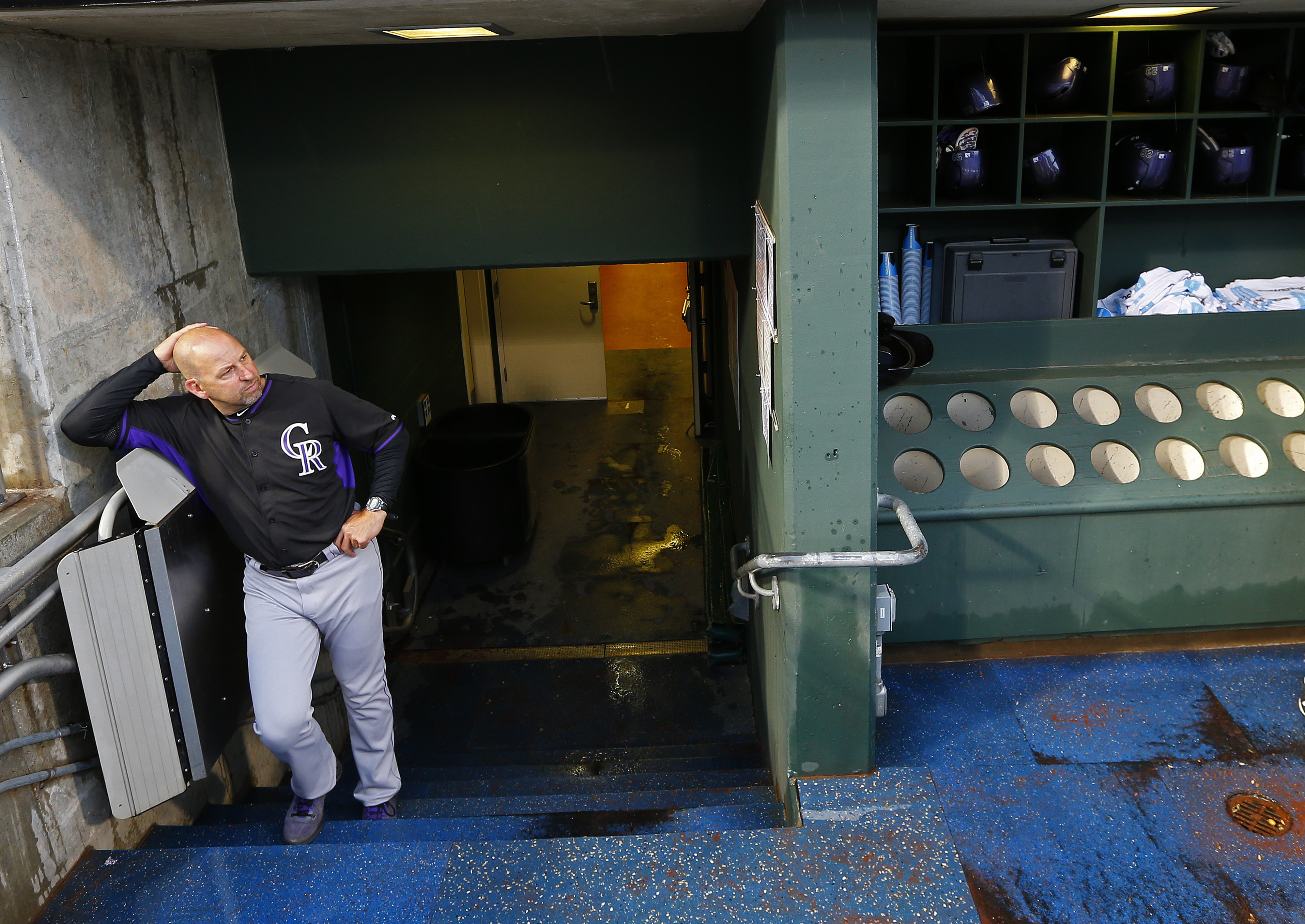 It has been a frustrating year for manager Walt Weiss (Photo: Getty Images)

The Rockies had a good squad in 2006 -- a season in which a young, inexperienced team led the National League West well into June before eventually faltering -- through 2010, but the impressive depth they compiled to help build those teams had vanished by 2011 and the team still hasn't recovered. Friedrich, Greg Reynolds, and Casey Weathers were massive first-round busts during that time, and the Rockies' picks in the ensuing rounds in those drafts weren't much better.

Rockies give away misspelled Tulowitzki shirts

Rockies give away misspelled Tulowitzki shirts

Developing pitchers has been the biggest issue for O'Dowd and his staff. Since his first draft with the organization in 2000, exactly two pitchers -- Jeff Francis and Rex Brothers -- who were acquired in the draft and developed by the team have accumulated five-plus wins above replacement in their careers. Even highly touted pitching prospects from other organizations who found their way to Colorado's system have scuffled during the developmental process. Drew Pomeranz and Alex White, both of whom were top prospects in the Indians system before being acquired by the Rockies, are good examples of pitchers who flamed out at the big-league level under O'Dowd's watch. Even more damning is the fact that Pomeranz got his career back on track immediately after being dealt from the Rockies to the Oakland Athletics.

Implementation and execution of pitching philosophy

After their tumultuous 2012 campaign, the Rockies hired an organizational pitching director, Mark Wiley, and adopted a "pitch-to-contact" philosophy. The plan initially yielded strong dividends at the highest level, with Tyler Chatwood, Jhoulys Chacin, and Jorge De La Rosa each finishing with sub-3.50 ERAs in 2013. However, Coors Field -- a ballpark exaggerates even weak contact -- has flexed its muscle on the team's pitching staff this season. That, combined with numerous injuries to the staff, has resulted in a collective ERA of 5.06 through 101 games. Allowing opponents to put the ball in play is not always a bad strategy, particularly with a strong infield defense that includes Nolan Arenado, Troy Tulowitzki, and DJ LeMahieu, but Rockies pitchers haven't been able to execute that plan; the staff has finished 11th or worse in the NL in walks in each of the last four seasons.

Perhaps even more worrisome is that the Rockies own two of the top pitching prospects in the game, but both have taken significant steps in the wrong direction this season. After finishing 2013 as two of the best strikeout pitchers in the minors, Jon Gray and Eddie Butler have seen big drops in their whiff rates in 2014 and have not been anywhere near as dominant as they were a year ago. A big reason for the regression has to do with the Rockies' insistence on both hurlers limiting the use of their best pitches in exchange for pitching to the bottom of the zone, according to Baseball Prospectus' Jason Parks. Even once this peculiar set of "training wheels," as Parks puts it, are removed, Gray and Butler might not be given the best possible tools for success at the next level. Rockies pitchers have been ill-prepared all season, a scout recently told Fox Sports' Ken Rosenthal, quipping that the staff often pitches directly to opponents' strengths.

The Rockies have the 19th-largest television market in baseball, and the team is firmly entrenched in a TV contract that is nowhere near as lucrative as others that have been signed in recent years. As such, they don't have a lot of money to spend. However, when ownership does give O'Dowd and company the OK to spend money on the open market, the results often aren't very good. After a pair of winning seasons, the 2011 Rockies had only a few minor holes to fill. That's why it's still perplexing that O'Dowd decided to spend almost $8 million on a multi-year deal with Ty Wigginton, only to make a similar mistake a year later by giving a three-year, $31.5 million contract to Michael Cuddyer. That's not a huge amount of money compared to what the Dodgers, Giants, Cardinals, and other NL teams have spent in recent years, but it's still significant money that could have been better spent elsewhere.

"If product and experience that bad don't come!" -Rockies owner Dick Monfort to a fan in response to an email complaint.

The Rockies made significant offers to Jose Abreu, Brian McCann, and Carlos Ruiz last offseason before settling on a two-year, $12.5 million deal with Justin Morneau. The 33-year-old first baseman has enjoyed a renaissance with the Rockies this season (despite recently going on the disabled list with a neck injury). The same type of aggressive approach in free agency would likely help O'Dowd and his staff going forward, but it could also be argued that the Rockies should consider a full rebuild after what will likely be a fourth consecutive non-competitive season.

It's clear at this point that whatever the Rockies are doing in their front office isn't working. However, owner Dick Monfort does not see it that way. Though he has publicly called out Geivett, Monfort has said on multiple occasions that he doesn't believe a better option than the team's current two-headed GM duo exists. In fact, Monfort has gone as far as to say that O'Dowd is "head and shoulders above" every other GM in baseball.

O'Dowd, under whom the Rockies are 163 games south of .500, has somehow hypnotized Monfort into believing nobody else would be capable of running the team. With several good GM candidates available, that is a real shame. And, if Monfort truly believes that, he's going to find himself responding to a lot more angry emails than he already has -- and in turn, end up in more and more precarious situations -- over the next few years.

Come to think of it, maybe this is the best possible scenario for the Rockies.