It's time for Major League Baseball to broaden its penalties to target abusers because current penalties are non-existent.

Share All sharing options for: MLB's record on domestic violence worse than NFL's

If talking about Ray Rice's two-game suspension from the NFL for knocking his fiancée unconscious wore you out on Thursday, you might not have noticed that former Twins and Yankees second baseman Chuck Knoblauch also was arrested for domestic violence. According to a Houston television station, Knoblauch hit his ex-wife last week, the second time he's done this to one of his former spouses. He's currently out on bond.

The Minnesota Twins, who had been planning to induct the former AL Rookie of the Year and four-time world champion into their team hall of fame in August, immediately canceled the ceremony and the induction. They apparently understand how inappropriate it is to heap praise and honor on a piece of garbage so low that he would abuse his (former) spouse, or any woman. It's rare to see a team take bold action in response to allegations like these, as well as a reminder that Major League Baseball has a long history of completely and totally ignoring this problem at the commissioner level, and very often at the team level as well.

Major League Baseball has a long history of completely and totally ignoring this problem at the commissioner level.

While the NFL is content to believe that knocking a much smaller person unconscious is less serious than smoking a substance that is legally medicine in 23 states and the District of Columbia, the Tampa Bay Rays were happy to let a convicted sex offender pitch for them until his lack of effectiveness — as opposed to his lack of humanity — earned him his way to the minors, and even the Baseball Hall of Fame gets set to induct Bobby Cox, a man who allegedly berated and punched his wife, "continuing a pattern of domestic violence" according to police. Even the Twins continue to worship at the altar of Kirby Puckett, who allegedly strangled his wife with a phone cord and was charged with sexually assaulting a waitress in a restaurant bathroom (he was acquitted). Let' s not pretend that baseball is so much better than the NFL when it comes to policing its players. After all, Cox wasn't suspended for his actions and Josh Lueke wasn't disciplined after his arrest while with the Rangers organization for his 2008 crime. Nor was Brett Myers disciplined when he beat his wife in front of witnesses. In fact, Myers started the very next day. Aside from drug abuse and gambling (and barnstorming back in the day), Major League Baseball has never concerned itself with what its players have been doing off the field.

At no time in the last quarter of a century has there been a commissioner-level sanctioning of any player for domestic violence, and most teams haven't bothered either. A review of that period shows allegations and sometimes convictions (and/or charges dismissed via pretrial intervention, as with Rice) against stars as big as Darryl Strawberry, Jose Canseco and Albert Belle without any action being taken. In 2005, Dodgers outfielder Milton Bradley was visited by police three times on domestic violence calls. No charges were filed, no team discipline initiated. The Dodgers nominated Bradley for the Roberto Clemente Award that year. In January 2000, Rockies pitcher Pedro Astacio pleaded guilty in January 2000 to a misdemeanor charge of punching his pregnant wife. He started on Opening Day that year. 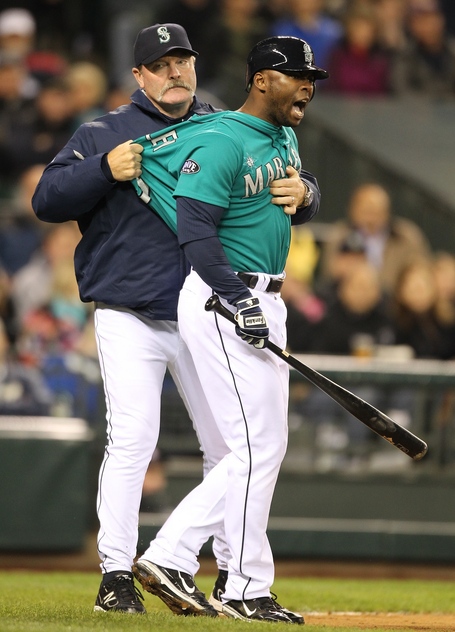 The two most prominent cases of team-level action after a charge of domestic violence were by the Red Sox against Wilfredo Cordero in 1997 and the Astros against Julio Lugo in 2003. Cordero was arrested in 1997 during a domestic dispute with his wife and threatened to kill her in the presence of the police. Initially the Red Sox did nothing, but following a news report that there were accusations of domestic violence during a previous divorce (including hitting his then-pregnant wife), Cordero was suspended by the team for about eight games. He pleaded guilty to assault and battery, assault and battery with a deadly weapon, making threats, and violating a restraining order. He received a 90-day suspended sentence and four months of counseling. He continued to play in the majors without further sanction until 2005.

In 2003, shortstop Lugo was arrested for hitting his wife in the face and slamming her head into the hood of a car. Lugo was charged with misdemeanor assault. The Astros released him shortly thereafter. He was signed within a week by the Rays and played in the majors through 2011. His wife reversed her testimony at trial and he was acquitted. Neither Lugo nor Cordero were star-level players, and it is likely that had they been they would been treated as the other players mentioned here were — with less of a penalty than Ray Rice got, which is to say none at all.

At no time did Commissioner Bud Selig intervene in any of these cases. Perhaps there was a behind-the-scenes phone call somewhere along the lines, but no suspensions were issued.

Rockies' front office is a mess If the Pads give away players, Yanks should take

It's time for that to change. Baseball is not a game played by saints, nor should it be. Many of us still are in awe of what a chemically enhanced Barry Bonds did to the baseballs (in 1993, Bonds too was the subject of a domestic violence complaint, although no charges were filed after his then-wife refused to cooperate). We don't insist ballplayers be good people or role models. However, at a bare minimum, in the name of basic decency, we should insist that players, coaches, executives and owners not abuse those that they supposedly love. As consumers, we have this right. There should be clear penalties that exist for anyone who would use their wife or child as a punching bag, and it should be a hell of a lot longer than the two games (which would extrapolate to 20 in baseball) Rice is being forced to miss.

Again, Baseball's culture isn't any better or more sensitive to these issues than is Football's. In 1992, Rockies outfielder Dante Bichette struck his pregnant 19-year-old girlfriend. The story was not public at the time and there was no discipline. "Although it was very wrong, we joke about it now," he said in 1999. One wonders exactly how often they laugh about it, and why.

At no time did Commissioner Bud Selig intervene in any of these cases.

Never mind the image of the league or its players; it hurts us all when businesses such as Baseball stand by and do nothing about domestic violence. It makes our society a little more violent and a little more dangerous for those who don't have the ability to fight back when those organizations that have the benefit of a vast public following market abusers instead of punishing them. According to the National Coalition Against Domestic Violence, one in four American women will be the victim of domestic violence in her life, and a large proportion of those men who abuse women also abuse their children. It's time for Major League Baseball to stand up, in the name of their fans, to the bullies and psychopaths who terrorize their wives and kids.

Baseball is a sport that prides itself on being part of the fabric of who we are. It's the national pastime. It "stands up to cancer." It swings pink bats on Mothers Day. It's not enough. One of the stories that we tell ourselves about ourselves is that we are better than our rivals. Smarter, stronger, morally superior. Part of being morally superior is actually being moral. Baseball doesn't currently have a responsibility to police its players off the field, but they absolutely should take on that responsibility, because of how egregiously wrong domestic abuse is and how it runs counter to what a sport predicated on fair play is about.