Half the teams holding a division lead or standing close to the second wild card have a recent history of total failure. Maybe they should get crazy at the non-waiver trading deadline.

Share All sharing options for: The 4 teams that could (should) go nuts at the trade deadline

Are you used to the second wild card yet? Maybe, maybe not. The odds are good, though, that you're not a fan of one of the four teams that lost in the wild card round over the last two seasons. You won't know the feeling of "Wait, where did the last 162 games go?" until it happens to you and your team. The second wild card is the penalty kicks of playoff baseball -- never has opportunity felt so unfair.

As such, there's a bit of a backlash against the idea of playing for the wild-card playoff game. A team that mortgages its future for a chance at a playoff to make the playoffs -- with any ties going to a playoff for a playoff for the playoffs -- is being shortsighted and unrealistic. I don't disagree. There's too much that can happen in one game to forget about the 810 games over the next five seasons, so a win-now trade is incredibly foolish for a team that might not even be ready to contend for their division.

Except, let me show you a chart: 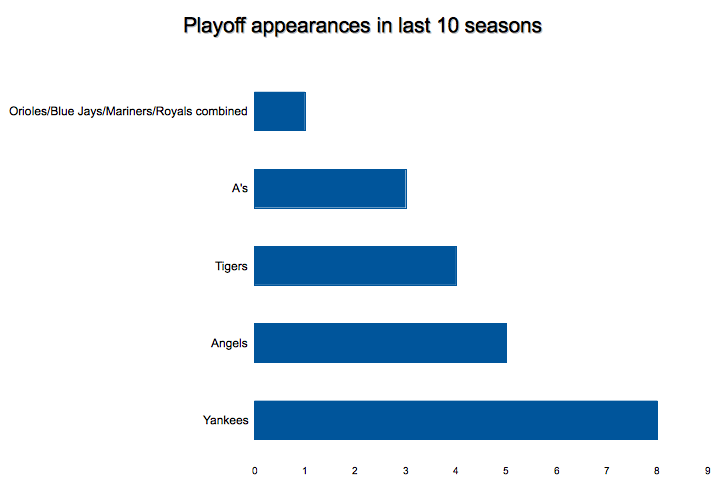 Those are all the teams in the American League who are within 1.5 games of a playoff spot right now. Note that if not for the Orioles, there would be a gigantic void at the top. I'd extend the parameters to 20 years, but the only difference is that you'd a) remember what kind of jerks the Yankees are and b) get some noise with the Edgar-era Mariners and Palmeiro-era Orioles, neither of which is especially comforting to fans today. Over half the contenders in the American League right now have been serious also-rans for the last decade or two.

Of the four teams, three of them have already made wild stabs at relevance. The Blue Jays repurposed the New Marlins and gave up a lot of young talent for a win-now pitcher approaching 40; the Royals traded their best and brightest prospect for a pitcher with a two-year window; the Mariners spent the GDP of Palau to get a star second baseman. It's not like the Orioles have been idle, either, giving up draft picks and cash for players like Nelson Cruz and Ubaldo Jimenez. All four teams have been hustling, scrambling for this kind of season.

An all-in approach that falls flat could be a mess. The Royals already gave up six years of Wil Myers, and ditching another couple of prospects -- if they're the wrong ones, mind you -- could set them back another decade. Same goes for the Blue Jays. The Orioles had to wait decades to get the stable of young pitchers they've built.

Analysts and pundits -- myself included -- like to think in terms of probability. If a team has a 50-percent chance to grab a wild-card slot, then that's more like a 25-percent chance to make the real playoffs. And that's if you're optimistic. Current playoff odds for those four teams:

That's as currently constructed, based on stats from the last 100 games and not projections for the next 60. That's just to get into the playoff for the playoff -- reaching the Division Series is even trickier -- all of which seems to point in the direction of prudence and discretion. Take the pieces that are working now, and add onto them in the offseason if it's not enough to make the playoffs this year. Pour prospects and youngsters into the bowl and stir. Figure out what's not working, and let the cost-efficient promise of pre-arbitration players help you. For goodness' sake, don't trade them away for a stab at 20-, 40-, or 60-percent chances at the playoffs.

It's time for Major League Baseball to broaden its penalties to target abusers because current penalties are non-existent.

As everyone recently learned, it's never dull with Ryan Raburn in the field.

Except Robinson Cano is good and healthy now. Nelson Cruz is freaking out now (or was -- he's hit .228/.301/.397 over his last 50 games, but may yet get hot again). Yordano Ventura is the rarest of Royals pitchers, effective and healthy, now. Jose Bautista is avoiding age-related decline now. If you don't think there's urgency, you're not watching baseball. There's a trap door that reads "2014 Rangers" under every team. There's a risk when it comes to trading prospects. There's a risk that comes with ignoring the now.

The clinical appeal to probabilities makes it sound like a binary thing, with a good (playoff) result against a bad (no playoffs) result. That's underselling it, though. There have been attempts to calculate the value of a playoff spot in a monetary sense, and each full playoff series generally makes their teams millions.  Beyond that, though, there's value in the shared experience of the playoffs, of a region talking about nothing else for a week, of remembering J.J. Hardy doubling against David Phelps. The Orioles are drawing more fans for the third straight season, and while it's easy to conflate causation and correlation, that's what the former also-rans are all chasing. Just one of those stupid seasons, and they're set up for it right now as well as they've been in over a decade.

I wouldn't say that I'd get goofy and shoot a roman candle filled with prospects into the sky. But I'm not sure I wouldn't do it, either. These teams don't have a 50-percent chance at a playoff for a playoff game; they have a 50-percent chance of doing something they haven't done much of since Chris Sale stopped playing with action figures. Don't judge them too harshly if they mortgage a bit of a future that might not have been waiting for them in the first place.