There were baseball reasons for the Jon Lester/Yoenis Cespedes swap. They don't matter so much right now.

Share All sharing options for: Yoenis Cespedes trade is a punch in the stomach for A's fans

The timing of the deal, man. It was early in the morning on the West Coast, with the bigger action supposedly happening in the afternoon. A's fans across the time zone were just getting up, putting warm beverages into their body, sitting in traffic, or dawdling in the shower. The baseball nerds among them were filled with thoughts of the trade deadline. What, oh what, could possibly happen in several hours?

That. That already happened. Yoenis Cespedes, fan favorite, derby slayer, inspirer of homemade signs, is on that team now, the one with the boisterous, obnoxious fans who scurry out from cracks in the sidewalk when they come into town. There's the business of what came back (rotation-leading ace, playoff tested, can match up with any pitcher in baseball), but until he makes a start or five, that's secondary. Until then, this trade is a week-long excuse to say, "They traded who?"

There are two sides to the deal, practical and emotional. The practical side is obvious. My guess is that in the next few hours, the A's will have make another trade, one that renders most of the insta-analysis useless. The A's probably have an outfielder in mind to pair with Gomes, and they're indicating they might not be done yet. They clear salary for next year and the rotation looks silly for the playoffs.

The practical can wait, though. This is about the emotional side to the deal. It's a reminder that Billy Beane is a cold, cold man when he needs to be, and that he can separate himself in a way that none of us can. A's fans won't be quite as capable. Say, what's on the docket for this weekend? 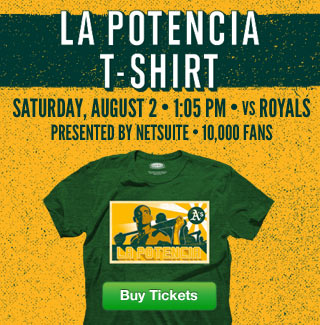 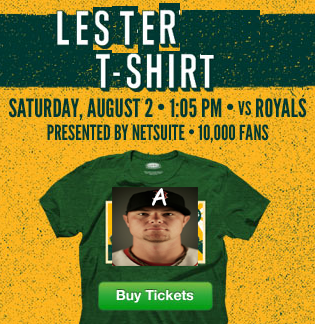 The Cespedes shirt was going to be a treasure to A's fans, who are fiercely loyal to the idea of being A's fans in a way that few fan bases can understand, and that shirt was perfect. Cespedes was going to be a free agent after the 2015 season, but it didn't matter. That meant two playoff runs with him, two more chances for him to scrawl his name all over the story of the A's, two more full seasons with him.

This isn't the first time Beane has dealt a fan favorite. Tim Hudson went to the Braves for nothing in particular, and Mark Mulder was dealt two days later. Nick Swisher had his fans before he was shipped off for Gio Gonzalez, who was shipped off for a bounty of prospects, some of whom were shipped off for more players. Beane trades, that's what he does. He's traded a phantom outfield that would have been amazing for a few years (Andre Ethier, Carlos Gonzalez, Nelson Cruz), but he waves off the misses. He trades because he has to.

Let us help you keep track of all the deals made during the MLB's non-waiver trade deadline.

This is the first time Beane has punched the fans in the gut, though. What's a Jon Lester? Sounds familiar. Seem to remember something about him last year. But Cespedes was the gamble that paid off, proof that the A's could be the mystery team every once in while, a tumbling, dinger-mashing spectacle. And he was the A's. This makes no sense, even if it makes all the sense in the world.

Give the folks some coffee. Let them settle down. Let them rejoice after the Jason Hammel trade that is surely coming. Let them watch Lester dominate in his inimitable way, and let them watch him succeed where Mulder/Hudson/ZIto couldn't. There are baseball reasons for this trade, and they're pretty compelling on both sides, even if it takes a crazy person to come up with the idea.

For the next few hours, though, be gentle with A's fans. It's hard to find a comp on the other 29 teams, but there's a player whose loss would absolutely devastate the fans. Cespedes is a slightly different cat, considering he wasn't likely to be on the A's in 2016, but he was still a wildly popular, unthinkable trade chip. There have been 5,309,938 trade rumors in the last 48 hours. None of them involved Cespedes. Because he wasn't going to get traded.

There are a million ways to look at the deal, and both teams are getting very, very valuable players. It's not an insane baseball trade from a practical standpoint. It's absolutely insane from an emotional standpoint. Billy Beane has taken some risks before. But nothing like this. If it doesn't work, it's going to be an interminably long offseason.

(Until Beane's next insane move, that is.)