Marc Normandin tried The Closer -- the Pirates three-in-one grilled cheese sandwich -- and defeated it. He also loved the sandwich and would like to always have one nearby.

Share All sharing options for: The Pirates' triple-decker grilled cheese sandwich is the king of ballpark food

What, you thought the Choomongous was the only weird and large ballpark food item I would be consuming for your entertainment this summer? There are a whole lot of other stadiums and concession oddities that need to be eaten and reviewed, so it was off to Pittsburgh for our second entry: The Closer.

The Closer is a grilled cheese named after closer -- well, now former closer, but we'll get to that -- Jason Grilli. Get it? Grill is in his name! Look, they made a shirt and everything, just in case you needed help making the connection: 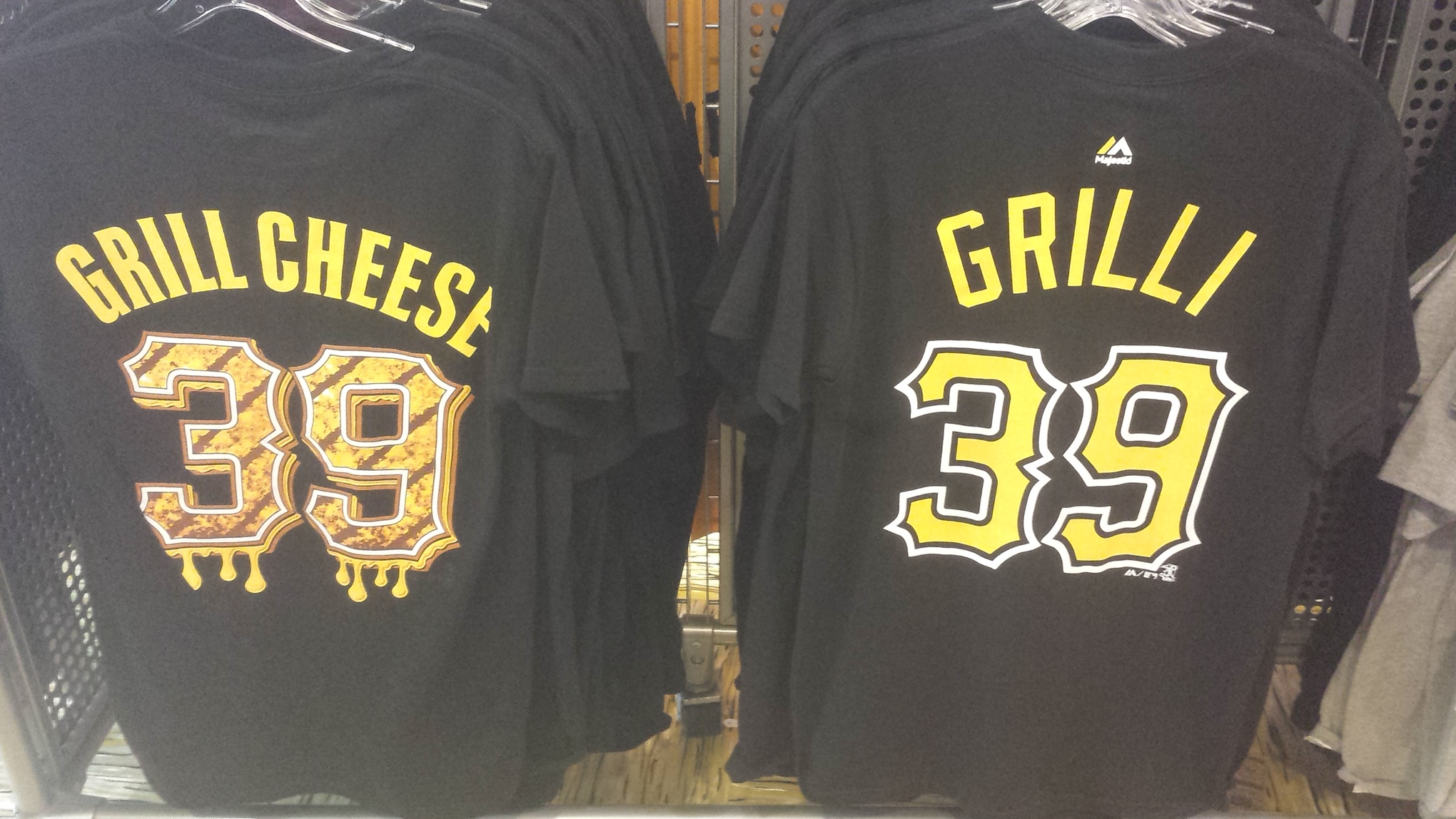 As for the "former closer" bit, Grilli was traded from the Pirates to the Angels recently after losing his job as the team's stopper. In fact, I just so happened to eat his sandwich at his final game as the Pirates' closer, in which he blew the save that cost him his gig, and any potential licensing opportunities that could have come from the Grilli Grill brand to boot.

It's a shame, too, because this sandwich should continue to exist for as long as our hearts will allow. 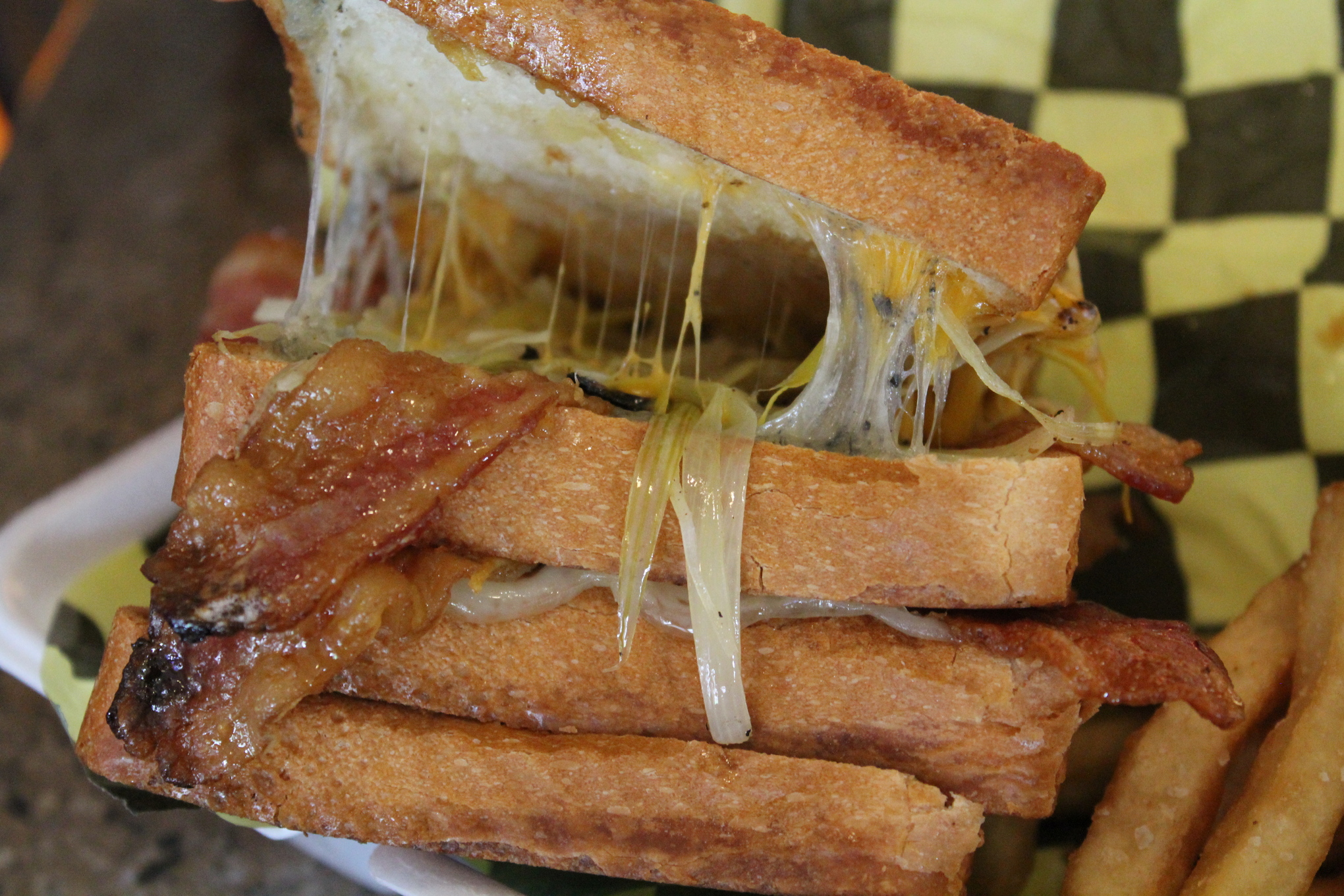 If you don't believe me or the above photo, will you take the word of the man who snapped it, Pittsburgh's and SB Nation's own Spilly? The two of us descended on PNC Park on a rainy afternoon to take in a game and a Closer each. You know, for science.

The Closer is only found in one place in all of PNC Park, in the pub and restaurant situated behind left field. It's a long walk to get there unless you're already sitting in the outfield, and if you plan on eating your Closer in the restaurant itself, you might have to fight for seating and a viable view of the field. The hostess knew exactly what I was looking for, as I started to say, "Where can I order the... " and was interrupted with the menu item and place where I would find it before I could finish. It's at the bar, if you were wondering.

As it's a restaurant setting and not a concourse kitchen, we didn't get to actually watch them make the $14 sandwiches, which took them about 15 minutes to prepare -- whether that was because there were two of us or the sandwich just takes that long to make, I don't know. They did prepare them for us how we wanted, though, with Spilly's cut down the middle and mine uncut, while he received thick chips and I opted for fries, which cost $1 more.

The fries, by the way, were great, while the chips were a bit stale and soggy at the same time.

What goes into this grilled cheese that makes it worthy of our attention? Cheese, mostly. Like, a lot of it. There are nine -- nine! -- different cheeses in The Closer: provolone, mozzarella, Parmesan, Gouda, cheddar, pepper jack, Swiss, blue, and feta. It's not just cheese for the sake of cheese, either, as they are organized on each of the three different levels of the sandwich, giving you, in essence, three completely different grilled cheeses stacked on top of each other. 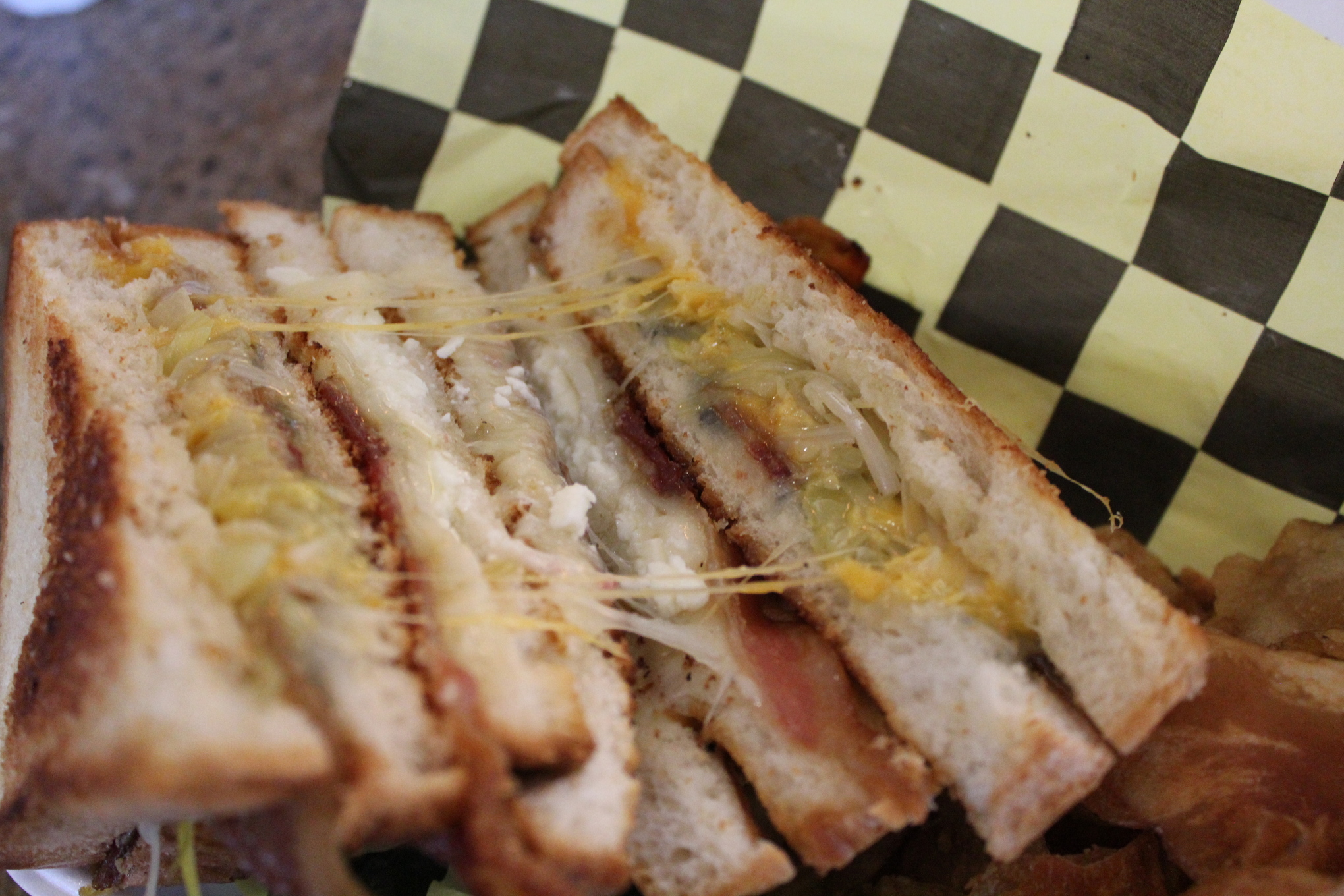 The Pirates-colored papering is a fun touch, but maybe that wasn't intentional since everything in Pittsburgh is black and yellow. The other bits of food you're seeing there are, in no particular order: candied bacon, a Granny Smith apple, and a leek compote. That's some fancy shit for a cheese sandwich at the ballpark.

"I thought it would be bigger."

While waiting for our sandwiches to come out, we turned and saw a gentleman who had already ordered and received his sandwich. He had overheard our order, and boasted to us before he took the first bite of his, "I'm disappointed, honestly. I thought it was going to be bigger", a sentence which he finished off with a confident laugh before tearing into The Closer. The bartender kind of rolled his eyes and gave him a look that said, "Yeah okay big guy" before heading off to his next task.

As we were watching the game, checking out our surroundings, and aren't total stalker weirdos, we didn't watch him during every second of his meal, but we turned back to him about halfway through, when most of the color had drained from his face and he seemed to be silently regretting his earlier bravado. We quietly peeked at him every now and again to check on both his progression and regression, and by the time he had finished and was attempting to pay his bill, he had the look of that guy everyone who has ever been out drinking for a little too long knows very well. He was trying to stay strong, with deep breaths through his nose, but he was a wreck who was one wrong smell or glance at another grilled cheese away from throwing up his entire Closer all over the bar.

It's a large grilled cheese, but not necessarily a large sandwich. It's dense as can be, though, and has those nine cheese plus those other goodies to make it both dense and rich in both flavor and feel, so it can be devastating to a person who isn't used to destroying themselves with food like this.

Needless to say, we were excited to see what effect the sandwich would have on us.

Getting To My Seat

We were sitting on the third base side behind home plate, so it was a long walk from center field. The pub provided us with takeout cases for the grilled cheeses, though, so it was easy enough to get back, and even stop to buy a water on the way. It was very crowded at the park and on the concourse, even with it already being the second inning by the time we were getting back with our Closers, but thanks to the containers, that barely mattered. Good job, PNC!

I wanted this to be delicious: it's a grilled cheese with bacon and essentially infinite cheeses on it, so if it were bad, it would be heartbreaking.

Guys. GUYS. This was so good. (Once I figured out where to attack it from, anyway. This video is the best example of how large this thing actually is before I squashed it to make things easier.) Unhinging my jaw and chipmunking the first bite could have ended horribly if it didn't taste amazing but, praise the sandwich gods, it was great. It was also shockingly tidy, even with it being kept as a whole sandwich instead of cut in half, as the pieces inside the sandwich stayed where they belonged. Thanks, abundance of melted goodness.

Those kids to my left were so into our adventures in sandwiching. They couldn't convince their parents to purchase them the grilled heart attack for some reason, though.

The candied bacon was the individual standout from the sandwich. Sometimes -- as much as I love bacon -- it's just placed into foods because the people preparing said foods know that it will make a part of many brains scream, "BACON". It made so much sense here, though, as it was candied, and gave the grilled cheese a sweet component it would otherwise lack in what was a very dairy-filled sandwich. The leek compote and Granny Smith apple did not stand out in nearly the same way, but they worked as complementary tastes with their respective cheeses.

I was impressed that the midsection holding the whole thing together, comprised of what looked to be mostly feta, stayed together throughout my meal. It didn't drip, it didn't slide out, and it didn't fall apart in my hands. This thing stayed whole from start to finish, and I didn't need a napkin until I was done. 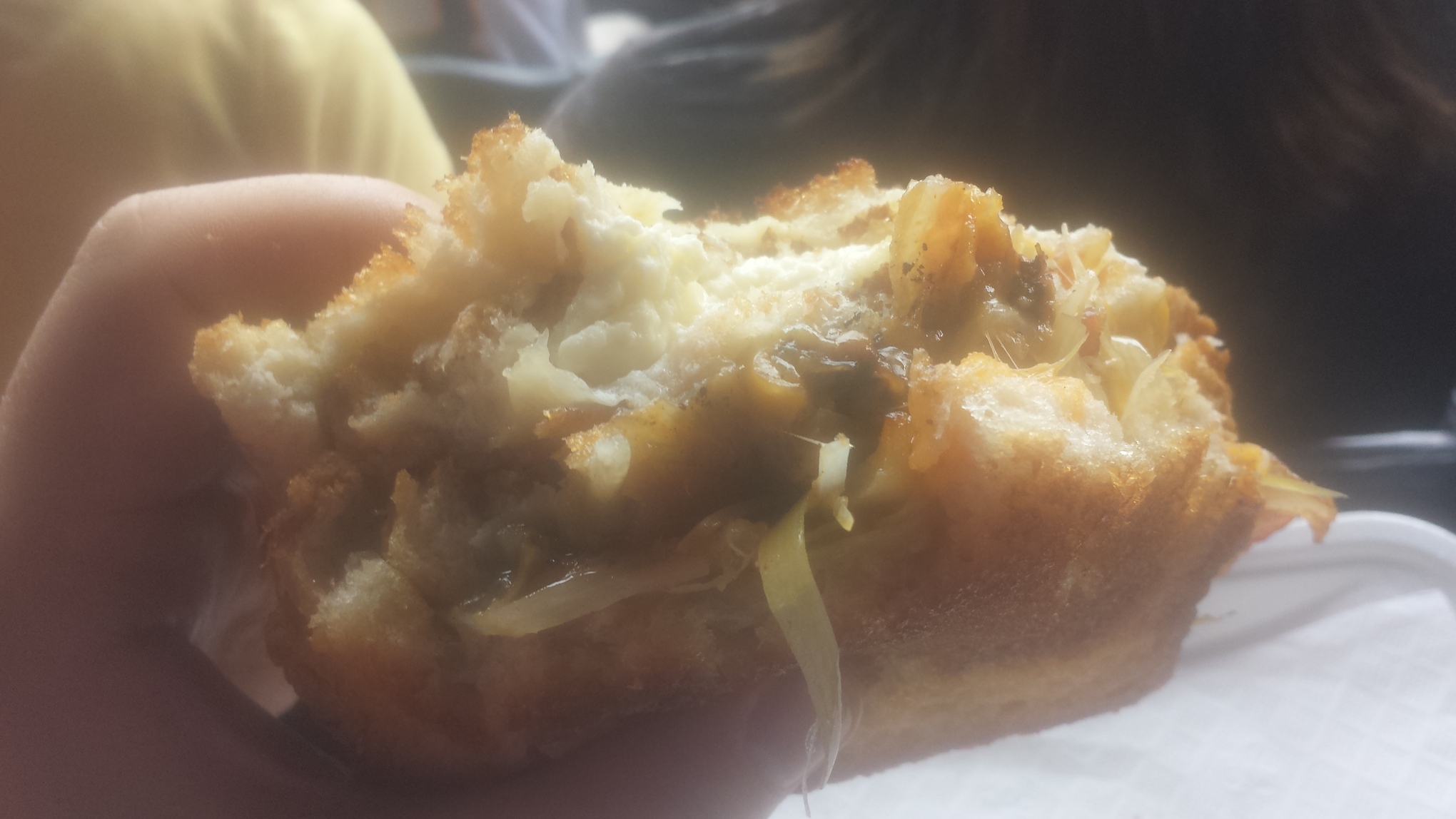 It took me eight minutes to eat The Closer...

...and I immediately wanted to get another one. Sensing that my stomach did not know what was good for my heart, I decided not to get up and purchase more, especially given how content I was with the one.

I ate all of the fries, too, so this thing was completely wiped out by me. 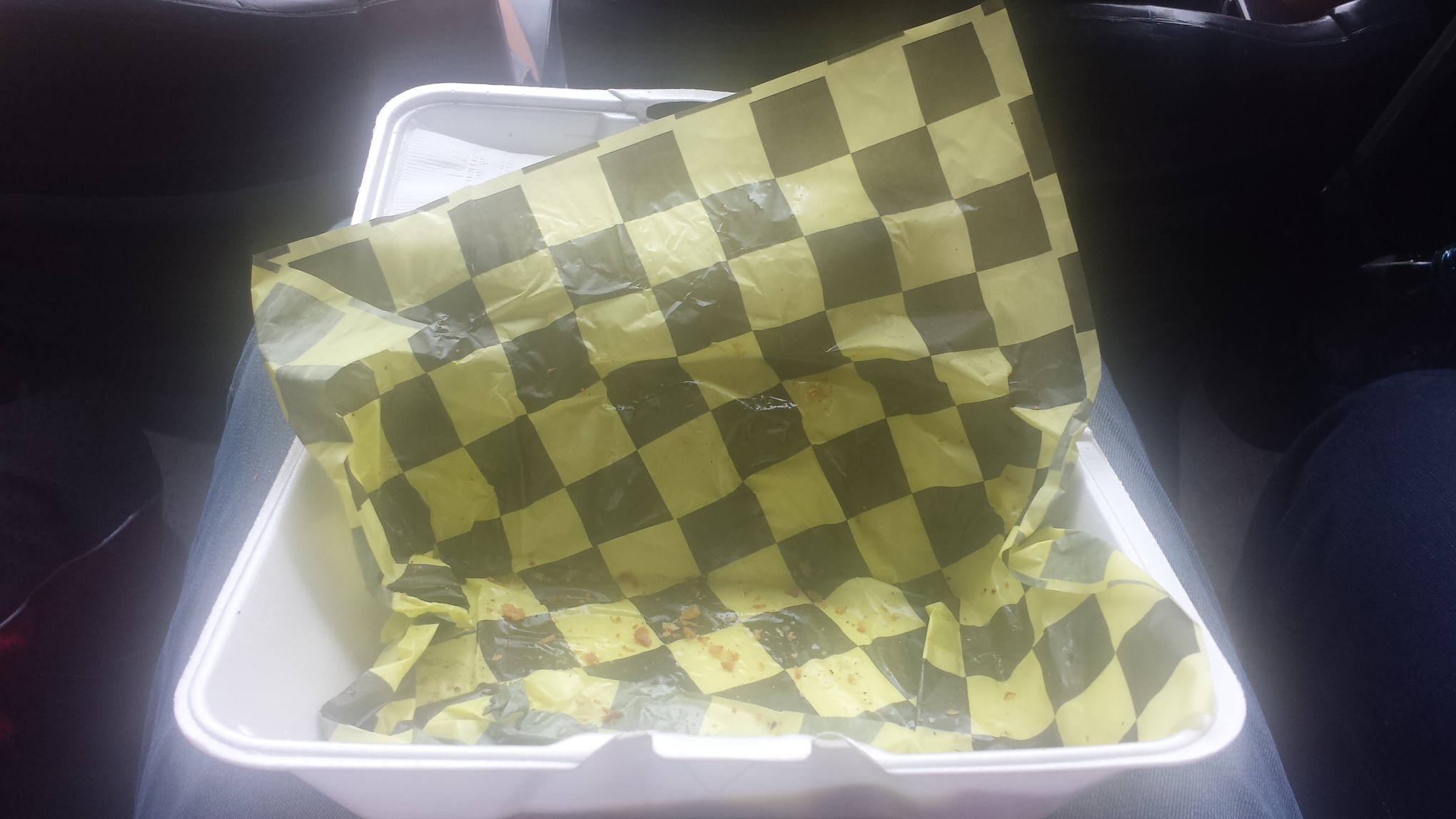 I'm annoyed, as I type this, that I can't have another one right this moment.

Do you live in Pittsburgh or the surrounding area? Have you eaten The Closer yet? Dudes and bettys of Pittsburgh or the surrounding area, you must go to PNC and try this glorious creation. I'm not saying you should get it every time you to go a game, unless you're attending a single Bucs' game per season, but you should absolutely try it and also possibly put it in your rotation and eat it all the time I am so jealous of you jerks.

I'm annoyed, as I type this, that I can't have another one right this moment.

If you don't live nearby, you should schedule your PNC pilgrimage. It's a lovely park with an incredible outfield window -- try not to sit with your back to the Allegheny, or you'll miss it -- and the team is actually watchable these days. If you go and you don't have The Closer, then you've missed out. It's only $14, which seems impossible given how much a hot dog or a box of Cracker Jacks costs at any big-league sporting event, and for people who haven't recently eaten most of a two-foot-long sandwich, one is likely enough. Or, more than enough, if you're like our near-death friend from earlier in this tale.

This might have been something of a gimmick item when it was drawn up, but it's delicious, relatively inexpensive, and while maybe insurmountable for those with daintier diets, worth whatever amount of it you can chow down.

PNC has your standard ballpark fare, it has pierogies, and it has some fancier ballpark food courtesy the more adventurous side of Aramark. You can grab a pierogi or whatever anywhere in the city, though. The grilled cheese that outlived its namesake is only in one place, and who knows for how much longer?