Share All sharing options for: Forget about trading Troy Tulowitzki

The Rockies are bad. Troy Tulowitzki is good. By the bylaws and rules imposed upon us all before every trade deadline, this means it's time to talk about trading Troy Tulowitzki.

Mike Petriello started over on FanGraphs:

The idea of taking 90% of the same roster into next year, hoping for better health and continued unsustainable production over a long period, and making it a winner, seems unrealistic. And in the meantime, Tulowitzki will be 31 with plenty of additional opportunities to have seriously injured himself and destroyed his value. There’s also a near certainty he won’t be hitting as well as he is right now. Who could?

Monfort, who is sensitive to public perception, has given no indication he is willing to trade either Tulowitzki or the Rockies’ other cornerstone, outfielder Carlos Gonzalez. But the best time to move either would be the offseason, when teams are more flexible with their rosters.

Rosenthal says it's Tulowitzki who, tired of losing every year, might be in favor of the trade. It's fascinating to explore the idea of a Tulo trade. It also brings us to some simple truths:

Trading him would most likely not work out

Since 2000, there have been 19 hitters with more than one six-win season. Four of them were traded. The Royals got John Buck, Mark Teahen and Mike Wood for Carlos Beltran. The Rangers got Alfonso Soriano and Joaquin Arias for Alex Rodriguez. The Marlins got ... stuff and assorted widgets ... for Miguel Cabrera. The Red Sox got Doug Mientkiewicz and Orlando Cabrera for Nomar Garciaparra.

Of those, only the Red Sox were happy, stripping themselves of payroll commitments and avoiding the painful disappearance of the oft-injured shortstop. But they were happy because Nomar was gone, not necessarily because they got back a bunch of franchise-changing talent. The Rockies would want prospects who could rise from the ashes and help the Rockies win where Tulowitzki couldn't. That's extremely unrealistic. 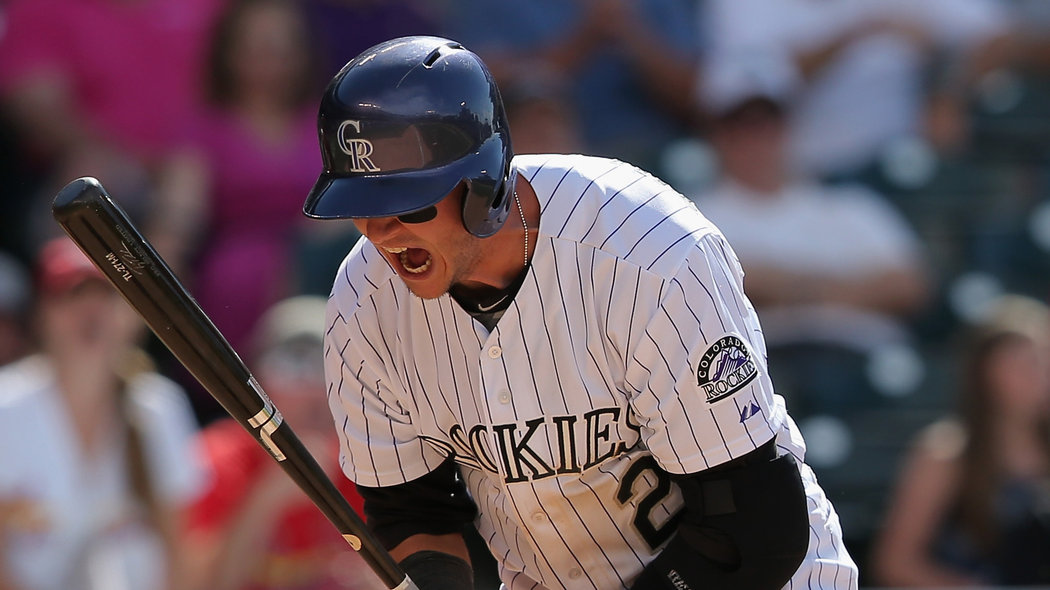 Pretty much. Photo via Getty Images

For perspective, pretend you're the GM of the Orioles in 1990. The team is bad, under .500. They have one asset everyone keeps asking about, a freakishly good shortstop. If memory serves, the shortstop also had a problem staying healthy (edit: I was thinking of someone else, I guess), but was always very, very productive. Your job is to dig through the top prospects lists and pick three prospects from the same team who would have added up to one Cal Ripken.

The Dodgers offer Kiki Jones, Jose Offerman and Tom Goodwin -- all top-30 prospects. The Orioles are tempted. They tell the Dodgers they'll keep them in mind.

The Rangers offer Juan Gonzalez, Dean Palmer and Donald Harris. This trio combines for a touch more wins than Ripken over the 90s, except Ripken accruing those wins for himself means the Orioles would have had another lineup spot to play with. Two four-win players don't equal an eight-win player. Also, they don't have Cal Ripken in one uniform forever, which hurts for decades in a way that's hard to calculate.

The Cardinals offer Todd Zeile, Ray Lankford and John Ericks. Like the above deal, this comes close to Ripken's on-field value. It's also just about the best possible scenario for a Tulowitzki trade, as far as prospects go -- matching his production, but split between a couple players.

No, the Orioles chase after the best prospect in baseball, so they take the Braves' offer of Steve Avery, Mike Stanton (not that one) and Kent Mercker. One of them has to do well, right?

Do this retroactive look for every potential one-team Hall of Famer, in every year. Occasionally, you'll hit on a Chipper Jones or a Pedro Martinez. Most of the time, you won't.

Anything but a home run would make for supremely disgruntled fans

"Home run" is a baseball term. And a Steve Avery trade would foment some serious discontent. There's also some good timing for this sub-heading, because via Hardball Talk we have some supremely disgruntled fans:

"I pretty much just filled out the survey and kinda wrote a little bit about how it's frustrating to spend the money and go see [Rockies] teams that are constantly struggling all the time," said Ferguson.

Two days later, he found out his comments did not go unnoticed. Ferguson received a reply in his inbox simply stating, "If product and experience that bad don’t come!"… signed owner, chairman, and CEO of the Colorado Rockies Dick Monfort.

Good strategy, out-of-touch rich person, though it needs a little workshopping. Still, for all of the Rockies' problems over the years, they've drawn well. They're fourth in the league in attendance this year, even though they haven't finished higher than third in the NL West since 2009. I'm not a marketing guru, and whatever statements I'm about to make are pulled from my nether regions, but a Tulowitzki trade changes that.

Winning cures all, and Rockies fans would be back for the next good team, I'd guess, but if the Rockies went into an extended rebuilding tailspin without their all-time franchise great, it would put an inescapable cloud over the whole franchise. You might get why the Rockies took the chance. John Q. Ticketbuyer might not. To the casual fan, rebuilding is almost synonymous with not trying. It's what the poor franchises do, the sad-sack organizations with no direction. It makes a difference when you're thinking about spending $150 to take a family of four (bring your own sandwiches).

On the other hand, when the team has a face-of-the-franchise star, there's at least one thing going right with the organization. People buy tickets for that. Kids keep the posters up on the wall.

When the Tulowitzki extension was signed, I responded with a flurry of Garciaparra emojis, at least in spirit. But he might be getting better. There's also a theory out there that calling a player "fragile" is like suggesting a .240 hitter will hit .240 for the rest of his life because we saw him hit .240 once. As in, it's impossible for us to separate the bad breaks from the bad bodies, even if our brains tell us we can. I'm not sure if I buy it, but I'm still sure that Tulowitzki, contract included, is one of the most valuable players in baseball.

The biggest reason to trade Tulowitzki would be to dodge a bullet. The Red Sox weren't happy after dealing Nomar because they got so much in return, but because they weren't saddled with an expensive, broken shortstop. Maybe, if the dealing team gets lucky, the prospects will hit, too.

If the Rockies were interested in freeing themselves of payroll obligations to avoid risk, though, they wouldn't have signed Tulowitzki to the gigantic extension in they first place. They did that deal because they were sure Tulowitzki would be worth more than a six-year, $118 million commitment after the 2014 season. They were very, very right. Perspective: one Tulowitzki doesn't come that close to buying a Shin-Soo Choo on the open market. The Cardinals just paid about a half-Tulo for a 32-year-old shortstop because they didn't have any internal options.

Tulo is underpaid right now. It's hard to believe, but almost certainly the case.

The money saved likely wouldn't be spent on anything better

Except Ellsbury's good, not great, and the other two have been disasters. Taking star money and spreading it around on lesser stars can lead to heartbreak. The money might be used to extend burgeoning young stars to long-term deals, but if the Rockies have those kinds of young stars, they'll probably wish they had Tulowitzki back to help them win.

Saved money doesn't do anything if it isn't applied correctly. I'm not sure if I'd trust Dan O'Dowd to spread it around properly, if I'm a Rockies fan. And he's never leaving, you know.

There's a chance the Rockies could flip Tulowitzki for players who will make everyone forget all about him, a bounty of prospects that leads the franchise into the next golden age. But I'm reminded of the strategy that Brian Sabean employed after taking over the Giants in 1996: Keep Bonds at all costs. He could have traded Bonds for Paul Wilson or Ruben Rivera, Darin Erstad or Ben Davis. He could have even traded him for Vladimir Guerrero (if the Expos were a normal team, bear with me). Nothing would have been as valuable as Bonds. Eventually, the Giants built around him and won again.

I've used Cal Ripken and a pre-chemistry Barry Bonds as comparable players for Tulowitzki, and if you think that's insane, you're probably underrating Tulowitzki. Unless the fit is perfect, just perfect, the Rockies should be unspeakably wary of dealing the face of their franchise.