The veteran catcher's time with the Red Sox has come to an end, but he may have suitors among contenders and non-contenders alike.

The Boston Red Sox spent $8.25 million dollars this offseason to acquire 37-year-old free-agent catcher A.J. Pierzynski. After 72 games of tolerating an aging catcher who has hit just .254/.286/.348 and thrown out only 19 percent of attempted basestealers, the Red Sox have seen enough and designated the veteran for assignment, calling up 23-year-old prospect Christian Vazquez.

It appears that the Sox don't have much faith that they will rebound from their current situation -- fifth in the AL East, 10½ games out of first place and approximately an equal distance away from a wild card -- and defend their World Series title, and are looking to establish the team's top prospects in the majors come what may.

Vazquez is considered one of the top prospects in the Red Sox organization, though he's only their second-best catching prospect after Double-A Portland backstop Blake Swihart.

Vazquez was hitting .279/.336/.385 at Triple-A Pawtucket and is a career .265/.344/.392 hitter in 500 minor-league games. That doesn't leave a lot to dream on in terms of big-league offense, but his catching skills, and in particular his throwing arm, are reputed to be good enough that he should be valuable anyway. This year he's thrown out 19-of-48 attempted basestealers, a 40 percent kill rate, about twice as good as Pierzynski's. The major league average is 28 percent.

This huge cheese sandwich is delicious

Pierzynski's rapid decline isn't necessarily a surprise -- he's 37, old in general and ancient for most catchers not named Fisk. The Red Sox were hoping to get the version of Pierzynski that managed a 120 OPS+ in 2012 with the White Sox -- instead of the one that had a .297 OBP with the Rangers last season -- to serve as a one-year bridge between the departed Jarrod Saltalamacchia and Vazquez and/or Swihart. Instead, they found only further decline, as Pierzynski's lifetime lack of feel for the strike zone wasn't offset by any other contributions. His 76 OPS+ is a career low.

While we can gripe about the dollars the Red Sox spent, they took an understandable risk given their rising catching prospects. In other words, they didn't need to risk long-term commitments to players like Saltalamacchia or Brian McCann, neither of whom has justified the investment made in them by the Marlins and Yankees (respectively) thus far.

The DFA doesn't necessarily signal the end for Pierzynski. Sure, it will take a special team to consider grabbing a 37-year-old whose already limited skills seem to have eroded, but if no one trades for him and the Red Sox are forced to pay all of his salary above the major league minimum, he might make sense for a team that needs a warm body.

One possible suitor includes the Los Angeles Dodgers, who have struggled for production at catcher due to having to rely on ineffective hitters such as Drew Butera, Tim Federowicz and Miguel Olivo during starter A.J. Ellis' two DL stints. Ellis himself has been productive by the standards of reaching base, but with only five doubles and no other extra-base hits this year, he's hitting an unusual .234/.390/.280.

Pierzynski also has the virtue of being a left-handed hitting catcher, and one of the Dodgers' few vulnerabilities on offense is a lack of left-handed hitting -- they're just 10th in the National League in plate appearances by left-handed hitters against right-handed pitchers, although they've been largely effective in the PAs they have had. Add in that general manager Ned Colletti has shown interest in Pierzynski more than once in recent years and you have a recipe for a possible fit.

Then there is Pierzynski's home for eight years, the Chicago White Sox.

Some of you have already unplugged your computer and thrown it from the nearest window. Some of you resisted the urge to do so just so you can send me hate since they are rebuilding and hardly seem to be in need of more veteran presence after hoarding old men for nostalgic reasons like Paul Konerko, now 38 and hitting .228/.265/.398 in a limited role. Still, the White Sox are in such a depleted, demented state behind the plate (28th in OPS+ at the position), that bringing back Pierzynski could actually be better offensively than what they have right now.

The White Sox opted to enter this season with last year's starter, Tyler Flowers, and Rule 5 draft-pick Adrian Nieto, a player who had yet to rise above High-A, as their catching tandem. Last year's rookie experiment, Josh Phegley, was sent back to the minors to mature. When your club is still talking about your need to mature at 26, that's a hint that they might not be thinking of you as the next Mike Piazza, especially when your rookie season involved 41 strikeouts and five walks in 213 plate appearances. They entered April with their fingers crossed that Flowers, who was respectable in 2011 in a limited role and didn't get much playing time in 2012 because of Pierzynski's success, would be the everyday option, rebounding from a season in which he had hit just .195/.247/.355.

At first it seemed as if the bet had paid off. Coming back from season-ending shoulder surgery, Flowers hit .354/.398/.415 in April, but completely fell off thereafter, hitting just .150/.217/.244 since. Heading into Wednesday's action, Flowers was 0-for-18 in July, and it's been over a month since he's hit a home run. Defensively, he's always had room for improvement and he leads the majors in passed balls/wild pitches with 44. Nieto hasn't done enough to inspire regular playing time, and though he's a switch hitter, he's been awful from the left side of the plate (supposedly his stronger side) in a small sample and his 76 OPS+ and zero home runs haven't helped his case for regular playing time. 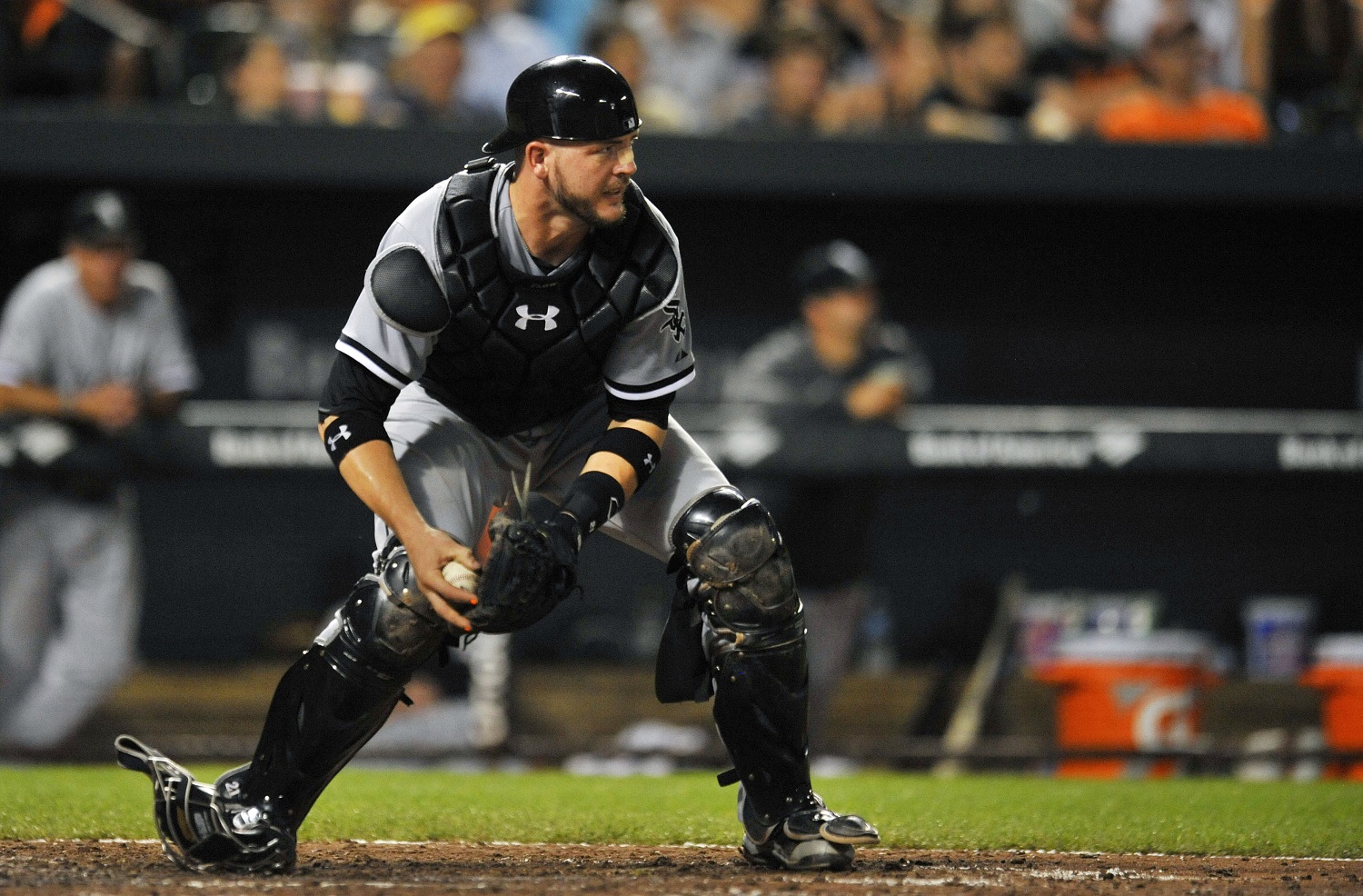 The lack of offense from the catcher position would be a more urgent concern for the White Sox if they weren't 7½ games out of first place in the AL Central, but given that the White Sox have a 9-6 record with a 3.01 ERA in their last 15 games prior to Wednesday and the Tigers and Royals have had long stretches of weakness, they aren't completely out of it yet in the Central. Nor is a 5½-game deficit in the wild-card race insurmountable at this point of the season.

As the trade deadline approaches, the White Sox are considering making some moves, all of which would be low-impact since they aren't going to move their core players (Chris Sale, Jose Quintana, Jose Abreu and Avisail Garcia), but they could get creative behind the plate by going older, one of the few times you can realistically say that.

Making a change at catcher will be difficult for the White Sox. The market for catchers is thin and competitive, so Pierzynski should have offers. Phegley has hit well enough at Triple-A (.253/.324/.498 in 300 PAs) that he probably deserves another chance despite how badly he failed last season, with an OPS+ (41) that was last in the majors among players with 200 or more plate appearances.

The White Sox have also been reluctant to move Flowers, who is 28, healthy, and always threatening to play better than he has, but all tests run their course and the "Flowers Experiment" is approaching its natural endpoint. Nieto is more complicated since he was a Rule 5 draftee, so the White Sox would have to offer him back to the Nationals should they try to demote him (assuming they don't go for the traditional sudden, shocking injuries that seem to afflict Rule 5ers whenever there's a roster crunch). Perhaps there is a team that is willing to gamble on Flowers, who is arbitration eligible at the end of this season and should become an inexpensive backup.

The idea of Pierzynski returning to the Southside is probably preposterous, but if the White Sox do show an interest it won't just be for nostalgic reasons. It's an odd move to consider on its face, but when you're awful at one position and don't have the Red Sox' internal options for improvement, sometimes the best you can do is hope to be a little less awful until you can find something better.