Jedd Gyorko has 31 career home runs, which is the most from a second baseman in Padres history. Is that the lowest total at any position for a franchise leader?

Share All sharing options for: Jedd Gyorko's 31 homers not the saddest team record

Look at this sad record:

With his grand slam in the 7th inning, @JGyorko05 now has 31 career home runs, a new Padres franchise record for home runs by a 2nd baseman! 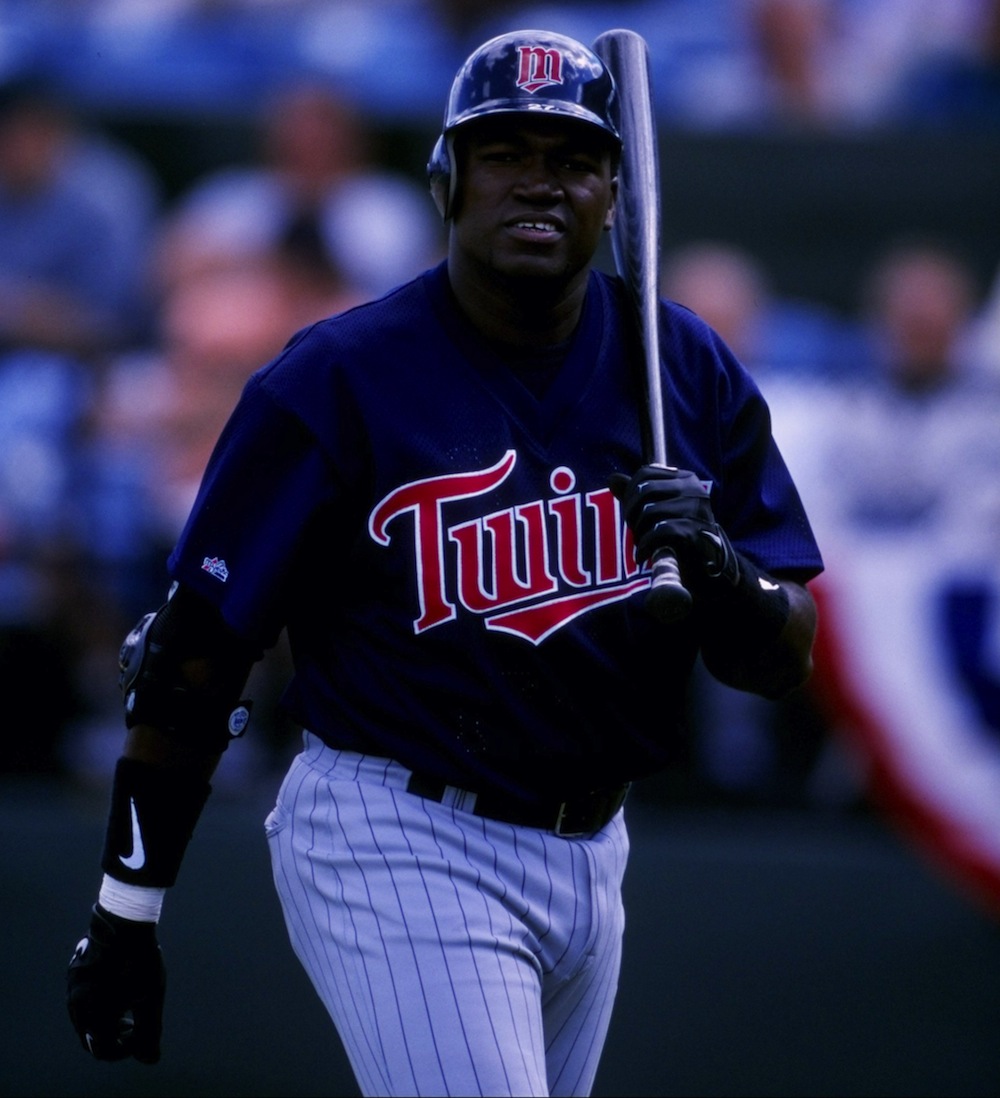 "Oh. Oh, my. That's much, much sadder than the Gyorko thing."/David Ortiz, Getty Images

At first, I thought they meant Gyorko's 31st homer this season was a single-season record, and I panicked because it seems like I should know when a player is having a season that good. Alas, no, they meant that Gyorko's 31 homers as a second baseman in his Padres career is a franchise record. Total. For any second baseman's entire Padres career. That's a sad record.

But is it the saddest record? As in, what's the lowest total for a franchise leader at every position? With the help of Baseball-Reference.com, we can find out.

Note, for the purposes of this search, the players need to have been at the position when they hit the dingers. You can't take Ernie Banks' homers at shortstop and first base and mash them together to make him eligible at both positions for the Cubs. You can't use homers hit as a pinch-hitter or while playing a secondary position.

To the saddest records!

The Rays, having been around since just 1998, don't really count. They're at least worth pointing out, though, especially considering they've historically had very little production at catcher. I'd like to think they make Tim Beckham's checks out to "Not Buster Posey," which screws the bank up every danged time.

The Pirates take it with Kendall, then, which is surprising in a couple ways. First, the Pirates have been around for 133 seasons. It's one thing for a relatively young franchise like the Padres to own the saddest career record at a position, but it's truly impressive to (not) do what the Pirates (haven't) done for more than a century.

The second surprising part is that I don't remember Jason Kendall hitting a ball more than 300 feet. I don't remember a lot from the '90s, and I mostly saw Kendall with the A's, so the problem is with me. He used to be an absolutely fantastic player.

The same disclaimer applies with the Diamondbacks: They've been around only for 17 seasons. The odds are decent, too, that they blow past the Angels in this department in the next year or two.

The Angels don't really have an excuse. This is their 54th season, and the rules of baseball allowed them to have a first baseman the whole time. It's always been where the sluggers played, yet here's the Angels' all-time list at first:

Here are Wally Joyner's season-by-season HR totals in his Angels career, ordered from most to least: 34, 22, 21, 16, 13, 8. That's the most powerful first baseman in Angels history.

That has to at least come close to Gyorko and the Padres. Though Albert Pujols has 17 years left on his deal, so there's plenty of time for him to catch up.

The funnier part is probably that he passed Mark Loretta to set the record.

Gyorko is still young, active, and good, so this record probably won't be sad for long.

This is a sad record, indeed, but there's some context worth exploring. Second basemen generally don't hit home runs at all. Only 29 players have hit more than 100 homers as a second baseman. Jeff Kent is the all-time leader at second for the Mets with 67. Mark Ellis is the career leader for the A's at the position with 84, despite being Mark Ellis. There are a lot of funny leaderboards when you sort by second base, so the Padres aren't alone. And their guy is still young, active, and good, so this record probably won't be sad for long.

Clint Barmes has 34 career homers at second for the Rockies, and that's their record. They've been around for just 22 years, but considering the park, that's probably as impressive as Gyorko and the Padres, if not more.

Related: I think I drafted Mike Lansing in the first round of a fantasy draft once. I did not win my league that year.

Gyorko needs just four more homers to make Adam Everett the saddest franchise leader in baseball. Like Gyorko, the era and ballpark make a huge difference with the Astros. Still, when Jed Lowrie cracks the top 10 on the all-time Astros shortstop list -- he played 91 games for the Astros -- you probably have an idea that shortstop hasn't been the historical strength of the Houston Astros.

However, the Mets get bonus points for the sheer hilarity of their top-10. Jose Reyes messed everything up by existing and doing well, but he can't ruin the entire list.

Rey Ordonez: fourth all-time on the Mets' shortstop HR leaderboard. He had eight.

Aramis Ramirez has 51, in case you were wondering. Then Jeff Cirillo with 68, eclipsed by Paul Molitor at 71. And then Don Money, who played 11 years for the Brewers and had one of those careers where he ended up with more wins above replacement than a few Hall of Famers and made a few All-Star teams, but you don't really think about unless you're a Brewers fan.

He was dealt by the Phillies in 1972 to make room for a rookie third baseman. I wonder what happened to that kid ...

Vaughn's mark is even more impressive considering he hit 50 in 1998. There are a couple teams with an interesting past in left, including the Expos/Nationals with Tim Raines (85) and B.J. Surhoff (88), though it's hard to give Surhoff the crown because we don't have the exact play-by-play data for players like Ken Williams from before 1940.

The Padres take it, and considering that left field is often the home of a lumbering slugger, it's almost harder to have this leader than Gyorko. Rickey Henderson almost cracked the Padres' top-10 with 17 dingers in left.

Lock had a freaky-short career, showing up as a 25-year-old rookie with the Senators, hitting a bunch of dingers, then disappearing shortly after turning 30. He was a prodigious whiffer for his time, striking out in almost a quarter of his career plate appearances, but he could hit for power and was a pretty nice player for three years, even getting an MVP vote in 1964.

Lock was acquired for Dale Long in a trade that almost certainly holds the record for fewest combined characters. Just 15 characters for two combined first and last names. I don't know why that excites me, but it does. Mel Ott and Ed Hug were never traded, and Ed Ott was traded just once, for Jason Thompson, so he doesn't come close.

Note: Do not touch Ed Hug.

The name is a trick and you will die.

This one is surprising until you remember that Lance Berkman played all over the outfield. Operation Shutdown was second on the list, with 69, and even Kevin Bass sneaks in ahead of Berkman.

The Blue Jays started losing at the wrong time

Losing is never a good thing, but Toronto picked the wrong moment to slip in the standings.

Royals in 1st place; enjoy it while it lasts

We cling to hope when an undergunned team makes a run at the postseason, but it's probably all ephemeral. Not that anyone wants to hear that. Or write it.

The Blue Jays started losing at the wrong time Royals in 1st place; enjoy it while it lasts

Joyce doesn't really count, and at least he's still going, too. One thing that surprised me with these searches is how often the newest expansion franchises didn't show up. There was always a Derrek Lee or Hanley Ramirez or Carl Crawford playing just long enough to get the team out of the danger zone. Just three of the positions needed an expansion disclaimer, which is about three or four fewer than I would have guessed.

There you have it, everyone. Considering that Jedd Gyorko is still going, I'm going to have to award the saddest franchise HR record to Adam Everett and the Houston ...

What's that? Designated hitter? Right, right, that's a thing. Let's look for American League teams only at DH (excluding the switchy teams like the Brewers and Astros) to see if there's an exceptionally sad leader at DH.

(Note: Jason Kubel also had 42 as a Twins DH, but Ortiz kinda needs to be in that header by himself for effect.)

So congratulations, Twins? You've made the Padres and their fans feel better, even if just for one day. That is one sad, sad record.