The 10 most underrated players in baseball, part 2

The thrilling conclusion, in which we probably ask if everyone's being a little too hard on Yuniesky Betancourt.

Share All sharing options for: The 10 most underrated players in baseball, part 2

Ah, to quietly do your thing in the shadow of someone getting more attention. What a beautiful dream. And the Nationals have Stephen Strasburg who throws 97 with a wicked curve and was kept out of the playoffs. Meanwhile, Zimmermann has been a super-secret ace. You might bristle at the word "ace," yet since arriving in 2011, Zimmermann ranks thusly in the majors:

And he's ahead of Strasburg in every category, (though the last two were affected by Strasburg's injury). Yet Zimmermann doesn't get the attention. He just pitches. It must be nice. It reminds me of a pitcher on the Tigers who was pitching extremely well, but everyone was all Scherzer this and Verlander that, until the Tigers TRADED HIM FOR NO GOOD REASON. TRADED HIM TO THE NATIONALS, WHERE HE GETS TO PITCH WITH ZIMMERMANN. AND STRASBURG. FOR A GENERIC LEFT-HANDER WHO THROWS 90/91.

Sorry. Sorry. I ... I lack restraint. The point is that Zimmermann is good, and even though he finished seventh in the Cy Young last year (because he led the league in wins, and our revolution is not over, comrades), he's still supremely overlooked when talking about the Felixes, Scherzers, and Prices of the modern baseball world. He's not a tier below. He's right with them.

Oh, how we had a grand ol' time when we figured out that Martin was given the biggest free agent contract in Pirates history. His two-year deal for $15 million was the most the Pirates had ever spent on a free agent, and while that says everything about the Pirates over the last two decades, somehow I wrapped Martin up in that everything, not appreciating him for the player he is.

The player he is: an excellent defensive catcher with superlative pitch framing skills, who has both patience and power. He's not a true.400 OBP guy like he's been this year, but he doesn't have to be.

This is the Jonathan Lucroy spot from last offseason, by the way. The cat's out of the bag with the Brewers' catcher, who will probably contend for first-place MVP votes in the same season he started an All-Star Game. I think he's rated and rated well, now. Martin, though, isn't going to get a four-, five-, or six-year deal this offseason. He'll get a two- or three-year deal and be a quiet move for a smart franchise.

Martin's the kind of catcher that managers used to speak of in hallowed terms, decades ago. They'd give quotes like, "You can't put a number on what he does. Handling pitchers. His work behind the plate. His ability to control the running game. Even if he's hitting .210, he's one of the better players on the team." Nerds -- myself included -- couldn't roll their eyes fast enough. Except they were right. They were so right.

Maybe in 10 years, we'll figure out that bunting the runner to second every danged time is the way to go.

I'm not sure if I've ever written the name Corey Kluber before right now. That's partially on me for focusing on other stories, when Kluber is one of the biggest of the season. That's partially on him for being the Corey Kluberiest player imaginable. He wasn't a high draft pick. He wasn't a top prospect. He wasn't in the majors to stay until he was 26. The Indians seemingly grew nondescript pitchers named Corey Kluber in a pot on their windowsill, and a lot of us couldn't tell them apart from what was growing in the Zach McAllister patch in the backyard. 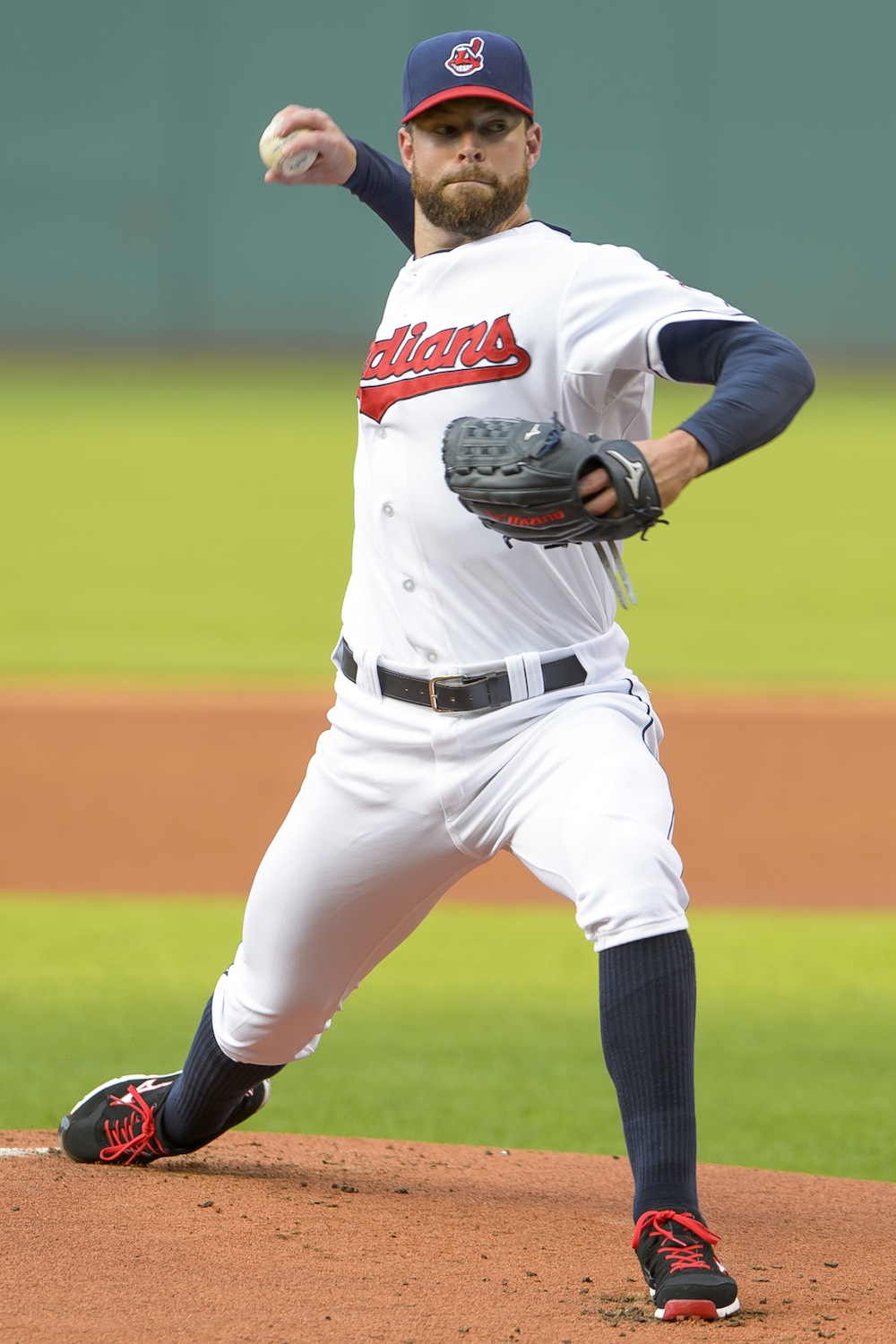 Kluber wasn't nondescript, though. He was emerging. From MLB.com:

Rain showers had washed away Triple-A Columbus' pregame plan, and Corey Kluber retreated to the confines of a cage to complete his workout. With rain falling and nothing but time on his hands, the pitcher decided to have some fun with the mound session.

Kluber fired his customary four-seam fastball, but he then started working in a two-seam sinker every few pitches. Ruben Niebla, who was Columbus' pitching coach during that 2011 season, liked what he saw and told the right-hander to finish the workout with nothing but sinkers.

His sinker is the kind of pitch that hitters beat into the ground, but it's also good enough to get swing-throughs. It's the kind of pitch that makes you realize why teams mess around with guys like Chris Volstad for years, hoping he can refine it. Pitchers with swing-through sinkers they can control are freaks. They're the 40/40 hitters of pitching. Kevin Brown and Brandon Webb come to mind, sinkerballers who said, "Hit it on the ground ... or don't. I don't care." Yet just a couple years ago, most prospect mavens didn't pay him much attention:

The Padres were willing to trade him in a three-way that got them Ryan Ludwick back in 2010, and no one blinked. Now Kluber's ERA is 2.41, and his FIP is 2.38. He's on pace to be the first Indians pitcher with five strikeouts for every walk since Cliff Lee. Before that was CC Sabathia. Kluber's still looking for his first All-Star appearance, though. That's the difference. (That and sustained success. But give it time.)

Eventually his little brother will come up and post gaudy statistics, and we'll be left with a pile of sad Safeco stats that don't remind us of Edgar Martinez. That's unfair. The combination of Safeco and 2014 is an absolute bully to offensive stats, taking lunch money and handing out wedgies.

Yet Seager is somehow able to put up numbers that would look good in Texas five years ago. It wasn't Justin Smoak who broke through. It wasn't Dustin Ackley or Jesus Montero. It was Seager, and he did it despite skipping Triple-A, for the most part. This is the last time I'll do this for ... a week, at least ... but here's Baseball-Reference.com's fun tool/toy that gives us a guess at what Seager's current numbers might look like in another context:

I used 2009 because that was the last year with normal/inflated offensive levels. I used the Yankees to make you consider just how much you'd be hearing about Kyle Seager if he were putting those numbers up with that team.

Oh, and he plays a good third base, too.

The Mariners were never going to be able to buy an entire lineup when their super-prospects were pantsed by Safeco. They needed prospects to overcome that difficulty. They got Seager.

"This ranking is poppycock. I, for one, know exactly how good Zobrist is."

Good for you, you learned thing. You recognize just how good Zobrist is. You might even realize that he's ranked quite well in wins above replacement since becoming a full-time starter in 2009:

You might not be surprised. Here's what 90 percent of the baseball-loving world sees, though:

That's a nice little player, not a superstar. Your dad might have even used the term "nice little player" to describe him. You have different stats, sure, but think about the different things you need to know before you believe that Zobrist is a great player.

You have to know that average, HR, and RBI aren't great ways to evaluate a player. Seems basic, but don't take it for granted.

Which baseball players get short shrift when talking about the game's best? Here's the first half of a list of the most underrated players in MLB.

How to improve the Rays roster today

The Rays are on the edge of contention and still have the ability to find their way to the playoffs, but things need to click.

Underrated players in baseball How to improve the Rays roster today

You have to know that Tropicana Field is a latter-day Astrodome, and that park effects count for a heckuva lot.

You have to know how important it can be to have a player who can play -- and play well -- all over the diamond. If a player plays a middle infield position well, that's exceptionally important.

You have to know the value of a switch-hitter who doesn't have any major platoon splits. It messes with the other teams and their bullpens.

Quantifying all of that is tricky. It's why nerds still yell at each other about WAR every day. But no matter how cynical or supportive you are of WAR, once you take all of the context into account, Zobrist moves from good to great, where he's been for the last few years.

This is the Shin-Soo Choo Memorial Spot, the top spot where Choo lived for years and years and years until he signed with a major label and released that synth-pop double album. Zobrist is so underrated, he's taken for granted as an underrated player. He's almost certainly the most underrated, though. There's a reason the Rays were willing to replace David Price with Drew Smyly, but they didn't trade Zobrist.

Ben Zobrist is an excellent baseball player. You know that. They don't. He'll almost certainly become one of the very best players never to start an All-Star Game.