How Clayton Kershaw compares to the greatest pitchers in history

Kershaw's 2014 is incredible, as are his last few years, but how does that stack up against the all-time greats' best work?

Share All sharing options for: How Clayton Kershaw compares to the greatest pitchers in history

Unless you don't know what baseball is or what its stats mean, you're aware that Clayton Kershaw is having an incredible season. That shouldn't be news to baseball fans, either; should Kershaw maintain his league-leading ERA, it would be the fourth year in a row he's claimed that title, and unless something changes radically this should be the third time in four years that he brings home a Cy Young Award, the sole exception having resulted in a second-place finish. All of these accomplishments have come before the lefty has turned 27 years old.

That's clearly great without the benefit of any additional background, but we can context this thing up and see where Kershaw's four-year stretch of dominion over Major League Baseball sits when put next to the history books. You know Dodgers fans are dying to know how Kershaw will ultimately stack up against one of their Hall of Famers, southpaw Sandy Koufax, but why stop there? There have been other amazing pitchers and four- or five-year stretches in this game's long history, and Kershaw's place among them says some eye-opening things about his own successes.

More on the Dodgers

Two years ago, the Dodgers did something insane. Let's look at how both teams fared after the big deal.

More on the Dodgers

Let's start in the obvious, logical place with Koufax, though: His greatest years came right near the start of the expansion era -- the one we care about when trying to gauge things historically, given how relatively little the game has changed since then -- with that epoch getting going in 1961, while Koufax's first Cy Young Award (and votes) came in 1963. From 1962 through 1966 -- when Koufax was forced to retire due to the abuse he had put his arm through in a 12-year career -- the lefty, who originally played for the Brooklyn iteration of the Dodgers, amassed nearly 1,400 innings with a 167 ERA+. He struck out over nine batters per nine at a time when pitchers just didn't do that -- the league average strikeout rate for starters in 1962, Koufax's top strikeout year, was all of 5.5 per nine -- and did it for years even before he became the Koufax of legend.

Kershaw's performance holds up in comparison. Koufax led the NL in ERA for all five of those years, and Kershaw is currently on pace for four titles in four attempts. Kershaw's ERA+ is slightly better, at 172, and while his strikeout rate isn't nearly doubling the average like Koufax's, he's still punching out almost 11 per nine this year to lead the league and has the superior strikeout-to-walk ratio of the two. Most importantly -- and this is going to come up often -- Kershaw has done this from ages 23 through 26, and arguably hasn't even entered his peak years yet (assuming his health holds up). As Koufax reminds, a transcendent performance on the mound doesn't always mean health is part of the package for a pitcher, but the modern game also means Kershaw won't throw as many innings per year as Koufax. While Kershaw has a way to go before his career matches up with the elder Dodgers ace, his best work compares favorably, and if 2014 is any indication, it's not over yet, either.

If your best can hold up when compared to Koufax, it can hold up against just about anyone. Bob Gibson has a plaque in Cooperstown, too, but his greatest stretch came from 1966 through 1970, when the Cardinals' ace posted a 153 ERA+ and 274 innings per year. Again, an innings comparison just won't work with pitchers from the distant past given Kershaw being limited by managers with a better sense of arm preservation, but that is not an insignificant gap in ERA+. If you're wondering when Steve Carlton is going to show up here, he won't, because he never had a stretch as long and successful as Kershaw's. Neither did Dwight Gooden, who, for all his excellence in 1985 and the surrounding years, shouldn't be in any discussion involving Kershaw beyond one comparing their similarly youthful debuts. Nolan Ryan is also left out in the cold here, because his career was more about the fact he spent 27 years doing his thing well more than any one single, Kershawian stretch of excellence. 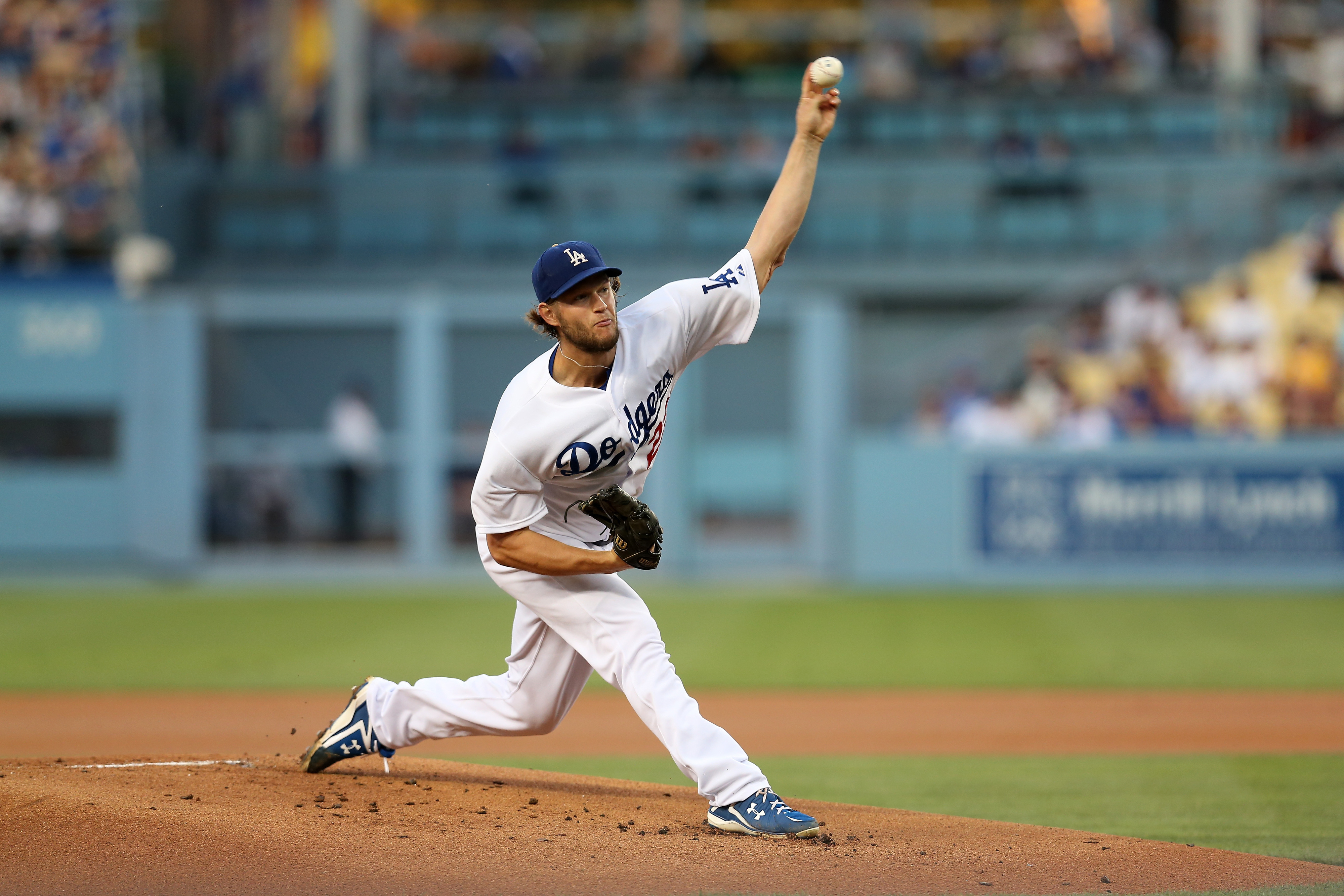 When tossed up against the best that the last two decades have produced, Kershaw once again finishes well to the fore. Roy Halladay posted a 152 ERA+ from 2005 through 2011, and did so while averaging 222 innings per year. It's easy to forget Johan Santana was once unstoppable, but he, along with Doc, dominated much of the last decade with a 157 ERA+ and 229 innings per year from 2004 through 2008. Kershaw hasn't succeeded as long as either of these two did, but Santana's dominance didn't even begin until he was 25, and the late-blooming Halladay was 28. Kershaw has, at the least, caught up to the brilliance of those stretches already.

Kershaw's stretch also bests that of the greatest What Could Have Been of that generation of pitchers: Brandon Webb, who logged a 143 ERA+ from 2003 through 2008 while averaging 219 innings per, effectively saw his career end along with his dominance thanks to injury, throwing just four more innings in the majors since. It tops that of the likely future Hall of Famer Curt Schilling, whose greatest stretch in a career full of them resulted in a 150 ERA+, 228 innings per year, and two World Series championships to go along with three second-place Cy Young finishes. Where things get a bit dicier for Kershaw is when you get to the pitchers who came in between the ones we've already mentioned.

Roger Clemens, Randy Johnson, Greg Maddux and Pedro Martinez all have compelling arguments as not only the greatest arms of their generation, but also the best of the modern game if not baseball in general. From 1999 through 2004, Johnson struck out just under 12 batters per nine, punched out five times as many batters as he walked, won four Cy Young Awards and came in second for a fifth, averaged 232 innings per season, and finished up that six-year stretch with a 175 ERA+. Maddux, inducted into the Hall of Fame officially just over a month ago, obliterated hitters from 1992 through 1998, coming away with a 190 ERA+ and 239 innings per season while striking out just under five times as many batters as he walked despite averaging fewer than seven strikeouts per nine. Then you've got Clemens, who, from 1986 through 1992, during his age-23 through age-29 seasons, earned "just" a 160 ERA+, but won three Cy Youngs, finished in the top three for two more, and averaged 257 innings per season. If you're into this, he also led the American League in FIP in six of those seven seasons, and even brought home the rare pitcher MVP in 1986.

Then, you've got Pedro, who, from 1997 with the Expos through 2003 with the Red Sox, achieved a 213 ERA+ with over 11 strikeouts per nine and a 5.6 strikeout-to-walk ratio. He took three Cy Youngs home, could have won the MVP in 1999 if only the one beat writer who omitted him from the ballot entirely had voted for him at all, and finished in the top three for the Cy on three other occasions in this stretch. During the greatest offensive period Major League Baseball has ever known, Pedro Martinez produced two full seasons with ERA under two, six of seven under 2.39, and all seven under three, with the loftiest coming in at 2.89. He averaged 201 innings per year in this stretch in large part due to his 2001, in which he made just 18 starts, but the sheer domination of everyone he faced makes up for the 20 or so innings he's missing in comparison to the rest of this group.

Kershaw isn't at a Pedro level yet. He's not at a Clemens, Maddux or Johnson level yet, either. Those Koufax comparisons are looking favorable and realistic for those who are hoping the Dodgers' ace of their day is the Dodgers' ace of all days, though, and Kershaw's just 26: he's got time to close the gap between him and four of the greatest arms who have ever taken the mound. Whether he will or not is unknown, as the careers of Johan Santana, Sandy Koufax, Brandon Webb and many more remind us, but he's in an incredible position historically already.