Here are the 10 relievers making the most money in 2014. Jonathan Papelbon is one of the only unqualified successes.

For example, do you know who the highest-paid reliever is in baseball? Take your time. Think about it.

Heck, let's put it in the form of a quiz:

Boy, do you feel dumb. But not as dumb as the White Sox, who paid $56 million over four years to a reliever who pitched exactly one inning for them. Unbelievable. But if you're the kind of sourpuss who thinks Adam Dunn shouldn't count, fine. Let's look at the top ten relievers in baseball by their 2014 salary and see how their contracts are working out:

Thought process of signing team
"Well, how in the hell else are we going to spend this money?"

Did it work out?
Not really. There's a chance, at least, and it depends on the Nationals' success this postseason. When the deal went down, the Nationals were baseball's superteam of the offseason. They had a full rotation. They had a full lineup. They were set up well for the following season, with the possible exception of the bullpen, so it looked like a great deal for everyone.

Did it work out?
Considering how mercurial and volatile even the best relievers can be, Papelbon has been a surprisingly steady pitcher. But his arrival coincided perfectly with the Decline and Fall of the Phillies Empire, so his contract gets lumped into the same viper pit as Ryan Howard's. The Phillies wouldn't have to eat that much money to move him, even after Youwantsomeofthisuhhhhgate.

The Phillies would still have to eat money, though, so it can't be that great of a contract. Also, the contract prevented the Phillies from making moves to improve the other 24 spots on the roster, ostensibly. For the last three years, though, Papelbon has been one of the best relievers in baseball. Considering the Phillies thought they were going to be in the playoffs often -- or at least in 2012 -- it could have worked out in an alternate universe.

Thought process of signing team
"We're gonna show the world what they get when they mess with the big-market Marlins."

Did it work out?
Well.

Bell is currently unemployed. LaTroy Hawkins is 84 years old and racking up saves, but Bell was never a good pitcher again after leaving the Padres. He was so bad, the Marlins had to swallow bags of cash to move him to the Diamondbacks. Here's his very first pitch as a Diamondback:

Pete Kozma hit that. So if you're looking for a way to describe how Bell's contract worked out, it's that he was dumped on another team after the first year, where he allowed a homer on his first pitch to a hitter who doesn't hit homers, and the ball ended up injuring someone.

Thought process of signing team
"We have to put this revenue-sharing money somewhere."

Did it work out?
No. Very no. So very no. The A's, who rarely hand out eight-figure contracts at all, much less to relievers, took a risk. It worked out about as well as the Ben Sheets contract years ago. The worst part is that it was an inspired move, just like the Sheets contract.

Like the Nationals up there, the A's didn't have five gaping holes on their roster. It turns out that Alberto Callaspo was about to disintegrate, and second base was going to be a true mess, but at the time, if the A's were itching to spend money, there was just one place to do it, other than the rotation. They paid a premium, but there were only so many ways for them to add more wins.

No, the worst part wasn't that it was an inspired move, but that it was exactly what the A's needed. The A's have been rotten with one-run losses lately. You know what would have helped? An extra bullpen arm and functional closer. Sean Doolittle moves back an inning, everyone else gets to ply their trade earlier in the game ... that's the sort of thing that would have helped the A's stop their slide a lot sooner. It should have worked, dang it.

Contract
One year, $10 million with player option for $8.5 million

Thought process of signing team
"We're going to buy baseball's best bullpen because that's how bullpens work. We're also going to pay this intern $400 to eat a pizza we ran over with a car because it's funny. Here's $100, forget you saw anything."

Did it work out?
Wilson has been a horrible, ghastly spectacle, and he hasn't pitched well, either. When the Dodgers finished creating the most expensive bullpen in major league history, Ned Colletti almost certainly leaned back in his chair, put his hands behind his head, and said, "These monsters are stacked.

Except Wilson's velocity is down, and his pinpoint command isn't back after Tommy John, which means that his nibbling strikes of yore have become frustrating walks when he doesn't get the call. He's had a 2.51 ERA since mid-May, though, so he's not quite the broken pitcher he looked like earlier in the season.

Also, this autoplays because I don't have a lot of respect for you or the Internet.

Thought process of signing team
"We get better and weaken a pennant contender at the same time. What can go wrong?"

Did it work out?
No. And yet again we're in the strange spot of arguing on behalf of a disastrous move. Most of these relievers went to teams without a lot of ways to otherwise spend the money. That's the common link. The Tigers were so confident in their rotation that they could give Doug Fister away, and their lineup was intact. Throwing money at a reliever seemed like a good move.

Except, did they have to trade Fister away to make financial room? Is that $20 million going to make a difference when they try to extend Max Scherzer in the offseason or find his replacement? Dunno, but it's not as simple as "they had nowhere else to spend it" with the Tigers. They're already quite leveraged.

Thought process of signing team
"Well, we tried to sign Grant Balfour to see if the money went counter-clockwise around the toilet after we flushed it, but he went somewhere else. So we figured we'd flush twice as much money to make up for the disappointment."

Did it work out?
League was a disaster last year, and while his ERA is superficially low this year, he's walking more hitters than ever and striking out fewer. Since the start of August, he's allowed eight walks and 17 hits in 12 innings. He's a land mine planted in the middle of the playoffs. Probably. I hope.

It's the second one. They don't care that they have relievers on this list; they're just concerned that the relievers haven't been better.

Thought process of signing team
"Hold on, lemme get another radar gun, this one's acting screwy."

Did it work out?
Unquestionably. Chapman makes this list because of a deferred bonus that kicked in when he became eligible for arbitration, but for the last few years he's been one of the top relievers in baseball on a very modest contract. The Reds were hoping for a starter for their $30 million, but they can't be disappointed with how things have turned out.

One day, Chapman will be just another guy. Every time I watch Francisco Rodriguez pitch, I think of Chapman. It's the weirdest thing. But I remember what Rodriguez used to throw 12 years ago, and it was some of the wackiest stuff I've ever seen on a baseball field, and his metamorphosis into the on-again, off-again closer of the last few years both uplifts and depresses me. Uplifts because he's an example of a pitcher who can't help but find ways to succeed, even if he's kind of a dillweed. Depresses because he's a shell of his former self, and that former self was awesome.

Sorry, Reds fans. Don't know why this one got me maudlin. Probably because it's the best contract on the list, and I felt like there was some balance needed.

Thought process of signing team:
"This furry man has helped us in the playoffs for the last two years. We should keep him around."

Did it work out?
No. Motte never threw a pitch the season after signing the extension, undergoing Tommy John surgery. He's back this season, and his first 23 innings have been uninspiring. His velocity is down a tick, but still plenty fast enough to succeed when the rust is gone. Unless Motte becomes a super-secret playoff sleeper star, this was $15 million thrown out of a moving bus.

Mostly, though, I'd like to direct your attention to this projection I made during the 2011 playoffs: 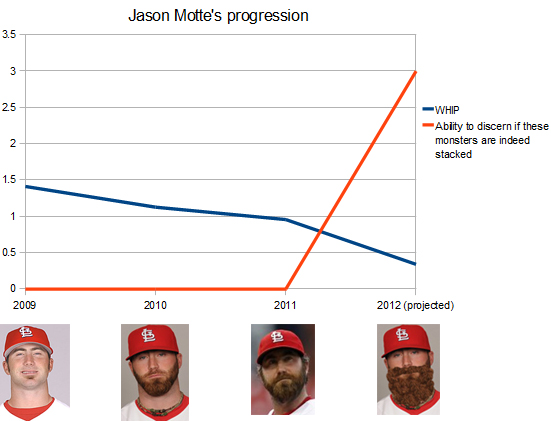 Here's the current picture from his Baseball-Reference.com page:

My goodness, Jason, it was a joke. A throwaway joke.

Thought process of signing team
"Not going to lie. It's good to have the best reliever in baseball around."

Did it work out?
So far. He'll make $9 million next year, $11 million the year after that, and $13 million in 2017. If there's any reliever in baseball worth that much, it's Kimbrel, but consider this quick-'n'-dirty list of the top relievers in baseball three years ago (by WAR):

Number of relievers on that list performing well this season: four, and that's including O'Flaherty's 18 innings. One of them happens to be Kimbrel, so that's a good sign. Still, I'll take the under on Kimbrel in 2017. Not because he isn't the best -- he is -- but because relievers are like a box of chocolates: They tend to melt and turn into a gooey mess when all you want are some chocolates.

There you go, the 10 relievers making the most this season. Three are doing well, and seven are somewhere between "decent and "disaster." That's generally how it works with these guys. No one likes taking a team's money and blowing it at the track quite like relievers. No one.