The win-now and win-later windows around baseball

Wondering how every team expects to do this season, and how they should plan accordingly? Here's the answer in one graph.

Share All sharing options for: The win-now and win-later windows around baseball

To recap, this is a plot with two axes. The x axis runs from "likely not contending" to "almost certainly contending." The y axis runs from "lots of young talent" to "aging." The definition of young talent is weighted more toward players in the upper minors and (especially) on the active roster, but organizational rankings are included, too. The definition of "contending" is based on a complicated formula that I've used for years:

In which "BT" stands for Buffalo Trace, "sV" is sweet vermouth, "ab" is bitters, and "idk" is an unknown variable. This formula is a key pillar of what's known as "sabermetrics."

You want to be in the bottom right of the below quadrant. It's really hard to be in the top left of the quadrant, but that's OK because there's just one team there. To the plot!

And some discussion of the teams and their positions on the plot: 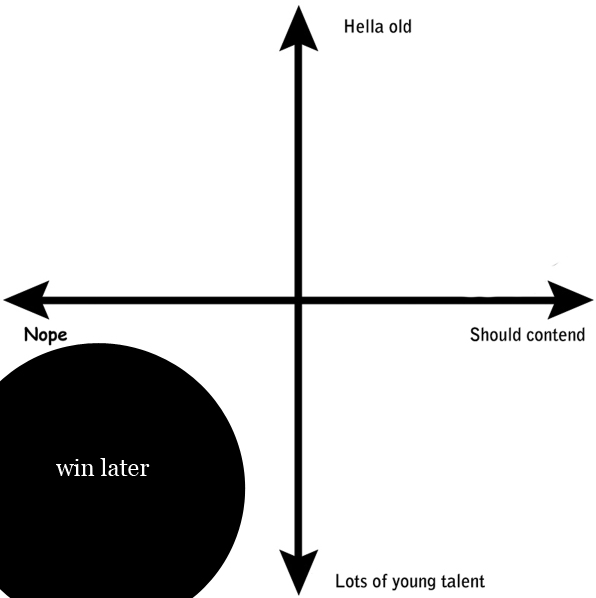 Oh, the Twins are spending like they're winning now. While the Phil Hughes deal might be wise and proactive, their decision to give scores of millions to Ervin Santana and Ricky Nolasco before Miguel Sano and Byron Buxton are ready was bizarre. I don't blame them for not wanting to get caught with a half-team, like the Padres did last year with their good pitching and woof hitting, but go for the reasonable options, man. Leave some money for when Sano and Buxton actually get there, and get the pitchers who are good then.

The Astros are upwardly mobile, and it's impressive just how much major league talent they actually have on the roster. There are a lot of players who should be there, which is a stark change from two years ago.

The Rockies are a mess, but they still have a highly regarded farm system. A sweet, innocent farm system that has yet to step onto the terrifying conveyer belt that turns the prospects into soylent green, which nourishes Dinger's black soul.

Really, that amorphous blob should extend to the "win now" text, or wherever the Yankees (and Brewers) are on the plot. These are the teams that should consider ditching prospects for one-year help, because those prospects might not be a lot of help in three years, after the good things about the teams have slowly disintegrated. The Tigers are up there again. The Giants are slowly creeping toward the top. The Angels don't have much of a farm system, but they are being a little forward-thinking by exchanging an expiring contract like Howie Kendrick for a starting pitcher under contract for the next six years. They need to do more of that, or be satisfied with the murky, thrilling waters of WIN NOW.

The Yankees are on the "should contend" side because I don't trust them or their zombie ways. But their lineup is ancient and their rotation is filled with dinged and dented pitchers who can't possibly last a full season. This has to be the year they finally finish under .500, right? Just like when Derek Jeter, Andy Pettitte and Jorge Posada got old. Remember how bad those teams were? Remember? 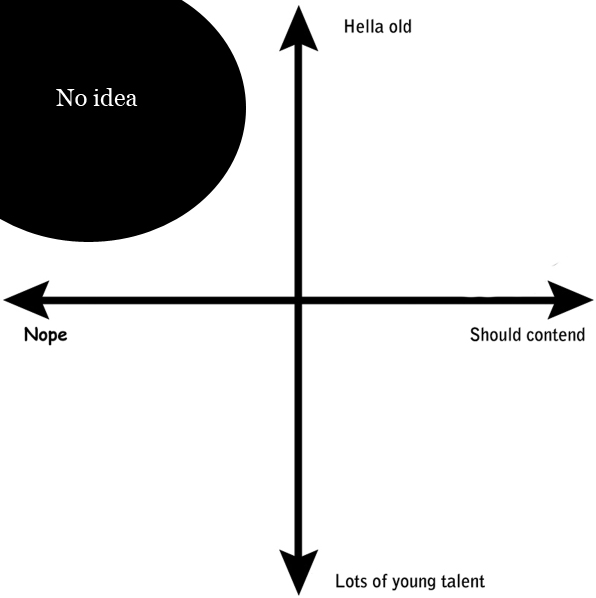 The Phillies are rebuilding without an architect

The Phillies finally used the dreaded "R"-word, but they're keeping GM Ruben Amaro, Jr. around. Let's rank his moves as a GM and see if we can learn anything.

The Phillies are rebuilding without an architect

It's really, really hard to be in this quadrant. You have to try. That, or be in denial. Teams that aren't on the should-contend side of the spectrum look around and say, "OK, who isn't going to be here when we do contend?" Then they ship those players off for prospects, or at least make room for younger players to see what sort of part they might play in the future. The Phillies declined to do any of that. They declined with extreme prejudice. And now they're kinda old and definitely abysmal. The younger players they have aren't thrilling.

Not yet, at least. The Phillies' farm system is on the rise, and Ruben Amaro, Jr. is finally having a garage sale. Marlon Byrd and Jimmy Rollins were the first to go, and there are certainly more to follow. For as much guff as we give Amaro, he was in a tough position. Howard/Utley/Rollins was an infield troika like few other in the history of baseball. They won pennants. They won a World Series. They made All-Star teams. They were players fans paid to see. The Phillies will sell exactly zero tickets next year because of Tom Windle.

Still, it takes a near-perfect set of circumstances to live in this quadrant. Good work, Phillies? 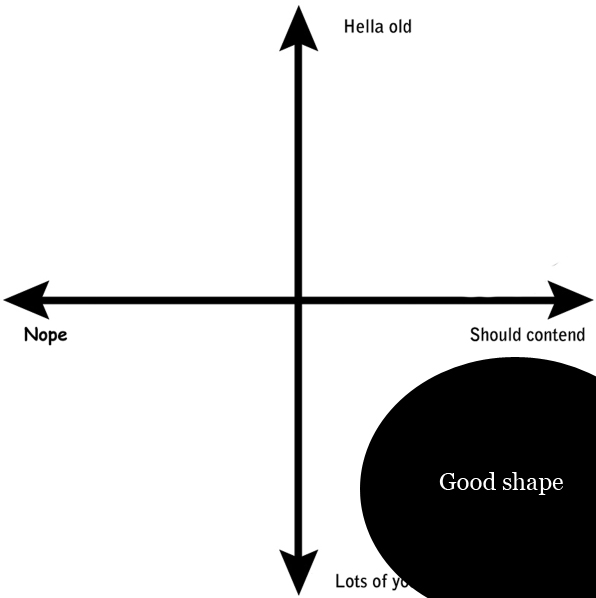 Set up now, set up for the future. They can trade prospects for veterans, or they can hoard. It's a trickier juggling act than you might think -- if the Pederson/Seager/Urias trio goes the way of Wood/McPherson/Kotchman, the Dodgers will look back at 2014 as the year they didn't get David Price and had to start Clayton Kershaw on three day's rest (again). Still, this is where teams want to be. They can thumb their nose at the other teams and roll around in the comfy bed of good planning.

Padres, what are you doing here, you should not ...

Dang. Well done, San Diego. Here's your ID badge. You should probably get a collared shirt that doesn't have pineapples and palm trees on it, just for the dinner parties. 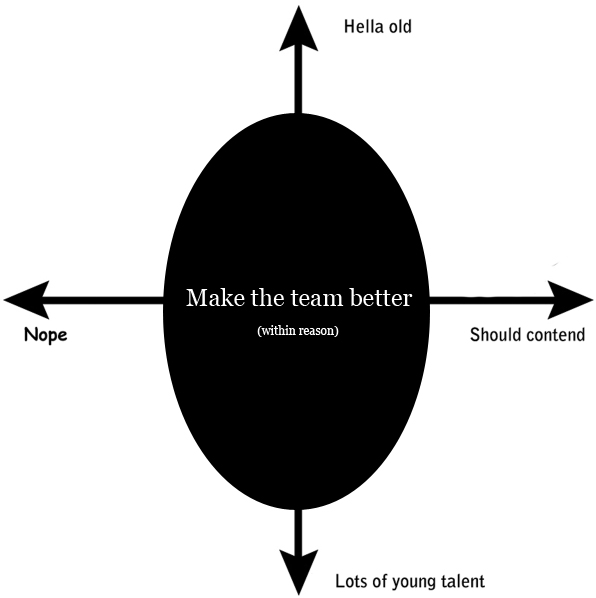 From the Mets to the Indians, the Braves to the Orioles, here are the teams that can lose 90 as easily as they win 90. All it takes is a break here, an unexpected development here (think Jacob deGrom), and that sketchy team is hustling for a division title. They'll need to make a choice. Do they try to win now, or do they stay on target?

The same goes for the teams expecting to contend if something goes wrong. Normal wrong, not plague-of-locusts wrong, like the '14 Rangers. At some point, those teams will have to wonder just how much good money to throw after bad money. Sometimes, the problems can be fixed on July 31. Sometimes, the fix ends up being worse than the problem.

Here be normal teams with normal dilemmas. Do not envy them, but know it could be a lot worse. Also know that Max Scherzer can nudge every team on this graph more than a little bit. Except the Phillies.

I'm sure there are no quibbles or disagreements with any of my subjective placements, so everyone do me a favorite and share this win-now graph