Randy Johnson threw a baseball through the bird of my heart

The story of how a hated rival became too damned good to hate.

Share All sharing options for: Randy Johnson threw a baseball through the bird of my heart

On Randy Johnson's 29th birthday, he walked eight batters in 6 2/3 innings. He also hit a guy, allowed a homer, gave up six earned runs, and picked up the loss. It wasn't like watching a pitcher. It was more like watching a gigantic pitcher costume being manipulated by three smaller pitchers inside. Limbs splaying and melding and twisting and contorting, with the torso ending up tied around the ankles -- and that was when the mechanics were right.

It was the kind of game that a rawest of raw prospects would have in Class-A, but it was only a little more wild than his previous start, when he walked seven batters and threw 142 pitches in another loss. That was just what Johnson did. Neither of those walk totals was his season high. Neither one of them was in second place.

There was no way it was ever going to work.

In his next start, Johnson struck out 15 batters, walked another and allowed just one hit and an unearned run. Every hitter in the Angels' starting lineup struck out at least once. Even though the Mariners lost in extra innings, everyone who watched the game said the same thing. This was going to work.

Even if he was almost 30, this was finally going to work.

That was the push and the pull of Randy Johnson for years and years. If he could just learn to throw strikes, you would think. And then you would look behind you, and the history of baseball would stretch out, littered with the bones of pitchers who just needed to throw strikes. The age and the body made it likely that it was never going to happen, that the best-case scenario was that he was going to alternate dominant starts with maddening ones. Maybe one day he could become an effective reliever.

Look at the mechanics from his 1990 no-hitter, in which he walked six batters. 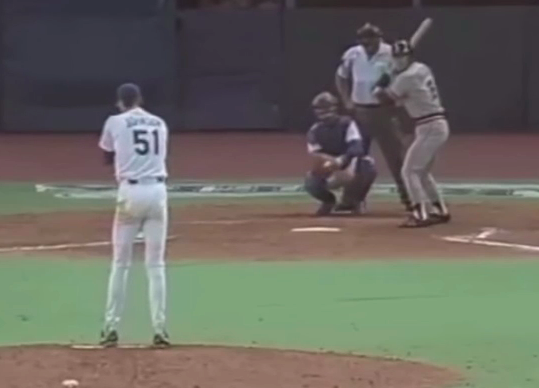 He took a little step back. That's good! Nice and controlled. 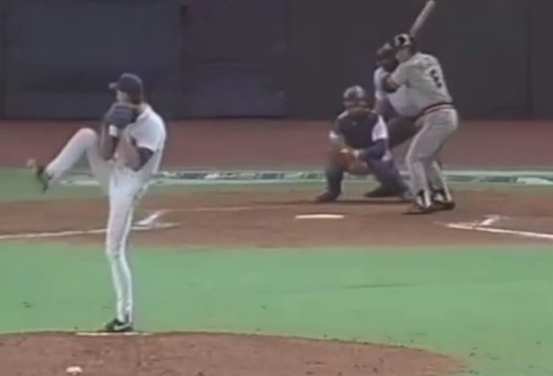 Alright, all systems are go. Everything could be a little straighter and refined, but ... 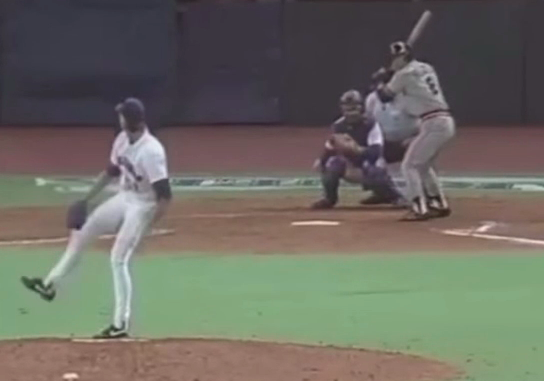 Then he's tilting and loading for power. From Jose Altuve up, he's almost perpendicular to the ground. Then things get weird. One limb's going one way, one limb's going the other way, and the torso's, like, "Hey, whaddya want from me?" 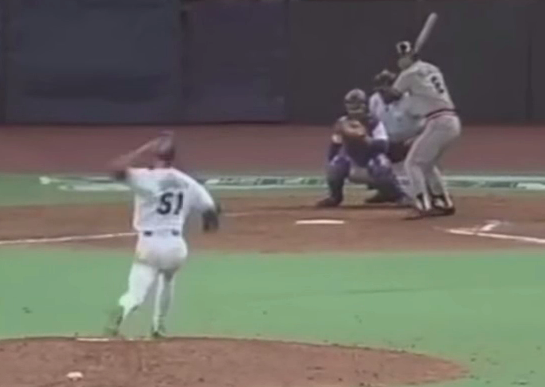 Pretend you're the hitter. You have a ladder getting caught in an airplane propeller in front of you, and you have to stare straight at it and wait for it to spit out a projectile. Could be at your head. Could be at your knee. And for a split-second, you lose sight of the projectile.

Wasn't it just there?

Where did it go? 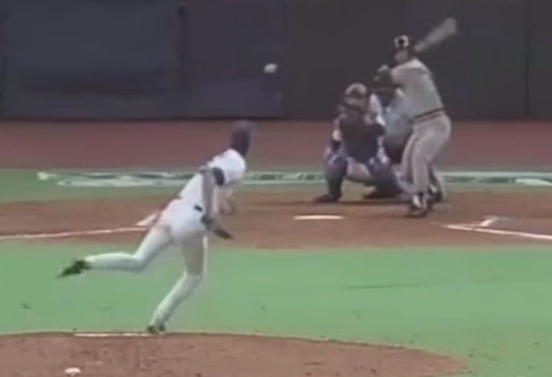 This is the first frame in which the batter starts his hitting motion. It's hard to judge the distance with just two dimensions, but the ball is close. Johnson, for his part, looks as if he's about to stop, drop and roll all the way to the dugout. 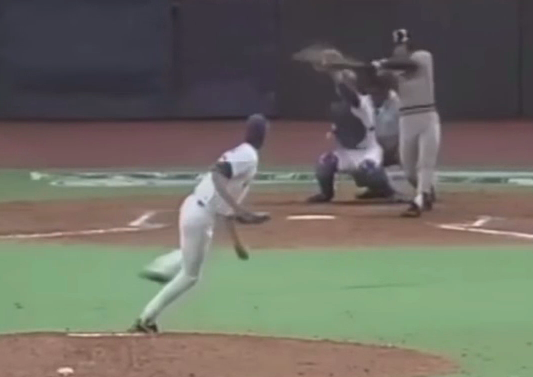 The big finish, summing up Phase I of Randy Johnson's career perfectly. He ends up at a 50º angle. The pitch isn't necessarily away from the target, because the target was loosely defined as "around home plate." It's up. The batter is helpless. Another batter might have taken the pitch, though, and the three after it. You were going to see this for the rest of his career. Unrefined, violent power that would work until it didn't.

Then his mechanics improved, he found his command and he was a superstar for the next 15 years.

That's just my best guess of what happened. Perhaps one day, Johnson woke up, gargled, got dressed and loudly proclaimed, "Today, I will try throwing strikes and see what happens!" Or perhaps he spent thousands and thousands of hours on his pitching motion, compiling the best pieces of advice from a dozen different coaches over the first 30 years of his life, connecting neurons and patiently building layers and layers of muscle memory. One of those two.

Rickey Henderson is in there, with his freakish combination of power, speed and patience, packaged in a tiny little crouch and offering jersey snaps and snatch-catch flourishes. Babe Ruth is in there for redefining a sport with his camouflaged athleticism.

And Johnson is in there for being a mess of physical gifts and liabilities that were all knotted together -- almost like hundreds of pitchers before him, but so much more extreme. Between 1992 and 1993, he loosened the knots and escaped like James Randi from a straitjacket dangling a hundred feet off the ground. It's almost like hoping Yadier Molina will develop 50-stolen base speed and coming back the next spring to find out it happened.

The progression from spindly duffel bag of tools to dominant pitcher was something I missed. He arrived in my baseball world fully formed. And I hated him. I was young and dumb enough to blur the lines between sports and real life, and Johnson wasn't just another opponent. He was the boss level, and the Giants always seemed like they were out of ammo and health.

He wasn't a presence. He was a result. When I was young and dumb, I couldn't appreciate what I was watching. I could only rail against what he was doing to my team. The Diamondbacks were a zit on the face of baseball, showing up without warning and instantly becoming an unwanted focal point. New baseball fans got to watch Johnson and Curt Schilling, and I thought there was no way they could appreciate what they were seeing. That there was no way they had earned it.

Turns out they were probably appreciating the absolute heck out of what they were seeing. I was the dummy. And there's no earn in baseball fandom, no sandwich punch card that you redeem for a free championship or Hall of Famer after 15 paid lousy seasons. While grumbling about the existence of Randy Johnson, I was missing Randy Johnson. It was almost one of the bigger mistakes of my baseball-loving life.

The closest I came to appreciating him was during a brawl between Todd Stottlemyre and Charlie Hayes, when he emerged from a scrum, scowled a bit and put on the hat he picked up.

For a few seconds, man. I got to dream. Imagine Johnson and Barry Bonds on the same team, fighting crime and winning baseball games.

Then it passed. Johnson was the enemy again.

The turning point was a fluke. Why was I watching a Braves game? Because they didn't show the Giants in Oregon. Why was I home at four o'clock in the afternoon? Because I was supposed to be out hammering "FOR RENT" signs into the ground all day, but I finished early and kicked off. Exactly once in my life have I left work early to watch a Braves game on TV.

Maybe it was the happenstance that appealed to me, that I picked a game at random and won a million dollars, so I changed my mind about the guy, like the Soviets at the end of Rocky IV. I'd like to think, though, that I finally saw the what in the absolute shit about Johnson that eluded me for so long. He was perfect, literally perfect, and it burned a hole into my brain.

This guy ... this guy is freaking awesome.

Removed from the yoke of wins and losses and caring about the score, it was so clear. Hey, everyone, get a load of this! This guy is awesome.

Randy Johnson and that game started something for me. A switch flipped, and the tunnel vision faded. Players on other teams could be awesome? Yes, indeed, players on other teams could be awesome. I wanted to watch Mike Piazza eat a Hot Pocket filled with living fire ants for so many years, and then I realized, wait, players aren't supposed to hit the ball to the opposite field with that kind of power. This guy is awesome.

Johnson taught me that I could hate the team, and I could hate that the player was employed by the team, but there was still a way to grumble with a hidden smile. The smile might have been internal, mind you. Something imperceptible that wasn't obvious, even to me. But there was a way to appreciate the excellent baseballing even as you hated that it was happening at exactly the wrong moment for your rooting interests.

I'm not sure if any other player could have kicked my brain back in alignment like that. Johnson was the perfect player to do it, the dominant force to break through the gray clouds. Finally, when watching someone who wasn't on my team, I had the epiphany.

You will never see this again. Look at this guy. There will never be another pitcher like him. Appreciate this.

As if you had to be reminded.

SB Nation presents: A-Rod's 3,000 hits taught us to love ourselves