MLS continues to struggle on TV, but there's reason for hope

The Nielsen ratings for MLS don't look good, but the demographic breakdowns give the league a reason to believe things will turn around.

Share All sharing options for: MLS continues to struggle on TV, but there's reason for hope

The average Major League Soccer fan is a little younger, less likely to be white and makes a slightly better salary than the average fans of other major North American sports leagues. MLS fans are also a bit more tech savvy and likely to share their thoughts on social media than their fellow sports fans.

These are some of the big takeaways from Nielen's annual sports media report (full report: year in sports). Most of it suggests that MLS is well positioned to see some significant growth in the future. But what it also highlights is that MLS is not doing as good of a job as it probably could in capturing the hearts and minds of North American soccer fans.

Perhaps the most telling bit of information was in the TV viewership, where MLS did not have a single game among the top nine soccer broadcasts. 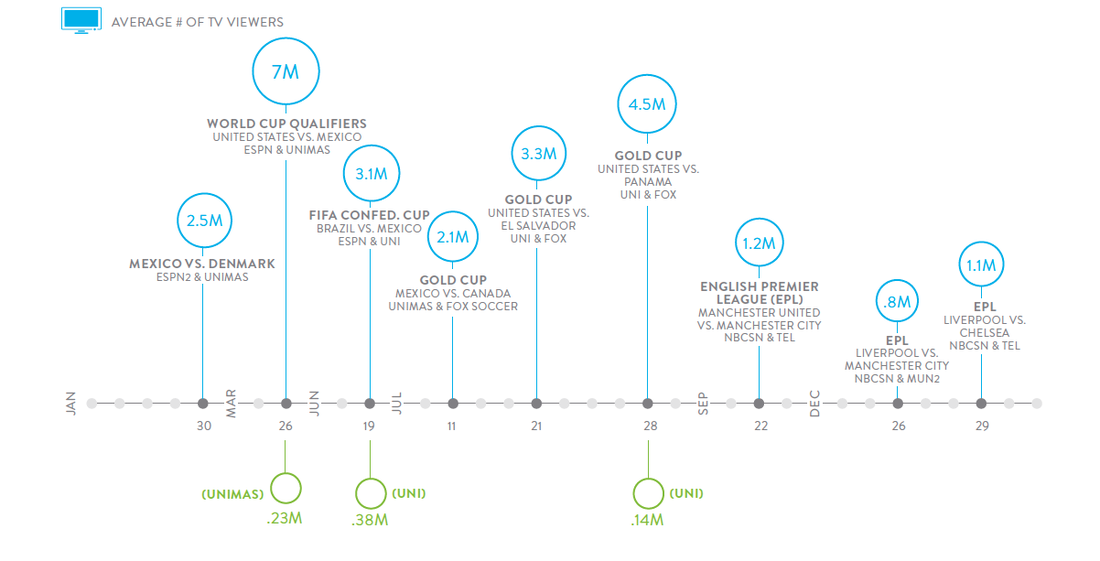 As standalone events, those numbers compare reasonably favorably to some of the other big games in other sports. The NBA's All-Star Game, for instance, had about 8 million viewers, while Major League Baseball's All-Star Game had about 11 million and the NHL's recently held Winter Classic had about 4.4 million.

What stands out, though, is that none of these games feature MLS teams. When only counting English-language broadcasts, at least, MLS numbers were not so encouraging. The MLS Cup final on ESPN had one of its lowest viewerships ever, with just an average audience of 505,000. That came at the end of a season in which ESPN2 averaged only 181,000 viewers and NBC Sports Network averaged a paltry 104,000.

But this is also where those demographic statistics start to tell a slightly different story. MLS continues to get reasonably strong numbers on Spanish language television, where UniMas averaged about 223,000 per broadcast and pulled in 514,000 for the MLS Cup final.

Perhaps those numbers shouldn't be so surprising, though, as a whopping 34 percent of MLS fans are Hispanic and 42 percent of the league's fans are nonwhite, according to Nielsen's report. Only the NBA had anything resembling a sizable percentage of Hispanic fans (12 percent) and more nonwhite fans (57 percent) among the other sports leagues. The U.S. population as a whole is about 17 percent Hispanic and about 22 percent nonwhite.

None of that is particularly surprising, either. What was a little bit more surprising, though, was that MLS fans make a bit more money than most of their fellow sports fans. Despite having a relatively young fan base (only the NHL had younger fans), 38 percent of MLS fans make at least $75,000 a year. Only the NHL (53 percent) and NFL (42 percent) had a higher percentage of their fans making that much money.

Combined with the revelation that 76 percent of MLS fans own a smart phone -- as compared to 66 percent of the U.S. population -- and that their fans view mobile video at about twice the rate of their fellow Americans -- 42 percent have done it in the past 30 days -- there's some obvious opportunity to look for viewers in places that other leagues haven't.

In the immediate future, there's only so much that can be done to fully capitalize on this information. Yes, MLS can continue to become more internet friendly. Products like MLS Live are a move in that direction and the fact that almost every game can be viewed online (as long as you also have a cable subscription) is a good step in that direction. The league has also been very proactive in making sure its teams are well covered (full disclosure, I cover the Seattle Sounders for MLSsoccer.com). But the chances of them turning down tens of millions of dollars in order to accommodate so-called chord-cutters just doesn't seem like a prudent business decision.

That said, if MLS can maintain a stronghold on these demographics it suggests that they are well positioned to see a dramatic improvement as their core fans age. It's no wonder, then, why ESPN and Fox are reportedly trying to lock the league into an eight-year broadcast agreement. As I've said before, though, such a deal would limit the league's ability to capitalize on this potential. Hopefully MLS can resist the urge for a quick payday and have faith that better and richer days are ahead.