Mixed martial arts in general and the UFC in particular have given us plenty of awful-looking injuries this year. Brock Lesnar's gruesome cut, administered by Cain Velasquez at UFC 121, comes to mind.

Georges St. Pierre added his own bit of damage to the MMA record with his destruction of Josh Koscheck last night at UFC 124. We have a photo of Koscheck's battered face — he suffered a broken orbital bone in his loss — from Bloody Elbow after the jump. Be warned: it's a little graphic. 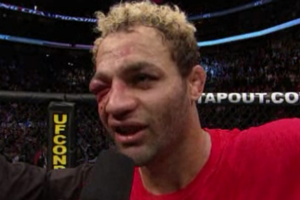 When you leave your opponent looking like Sloth Fratelli, you've probably won, and St. Pierre definitely did that Saturday night at UFC 124. But does that sort of win for St. Pierre make him unquestionably the best fighter in MMA?

Our Chad Dukes dives into that question, and comes up with some interesting ideas. (He also floats the idea of a St. Pierre-Anderson Silva megafight. Get excited.)