Randy Couture, Retired Or Not, Deserves Better From The UFC

Share All sharing options for: Randy Couture, Retired Or Not, Deserves Better From The UFC

The Twitterverse exploded last night when Randy "The Natural" Couture seemingly used his Twitter account to announce his retirement from mixed martial arts. At first glance, it seemed logical; at 47 years of age and with a budding acting career, I assume most MMA fans knew the day would eventually arrive. Couture has had 15 title fights, held both the UFC light heavyweight and heavyweight titles and seemingly has nothing more to accomplish in the sport. No one would fault him if he wanted to hang up the four-ounce gloves. 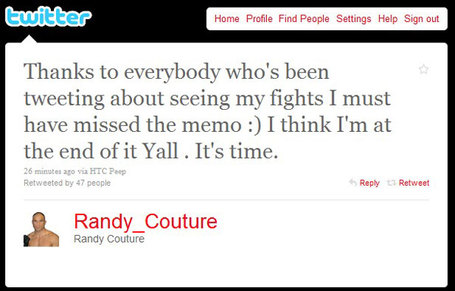 That's not what's happening here. The venerable Josh Gross from ESPN is reporting that Couture has two men with whom he would like to step back into the Octagon: Shogun Rua and Lyoto Machida. The Natural is being jerked around because it seems the UFC (presumably Joe Silva) has some reservations about putting the once-untouchable Lyoto Machida into the cage after suffering two consecutive losses.

Our fellow disgruntled sports talk veteran Steve Cofield has the the skinny:

The Rua fight won't happen because that would mean Couture gets an immediate title shot after beating guys like James Toney, Brandon Vera and Mark Coleman. Couture wants Machida, but there are some with the promotion who worry about the fact that Brazilian has lost two straight fights. A third loss would be crushing for "The Dragon."

This would be hilarious if it wasn't so tragic. First of all Machida is the man that people pontificated about being unbeatable just last year. At the time, I found that humorous as it flew in the face of everything we have ever learned about MMA. On any given evening, Matt Serra can knock out Georges St. Pierre. On any given evening Kevin Ferguson can WIN inside the Octagon. The arrogant notion that any fighter needs to be protected is what would be expected from the defunct Elite XC, not the UFC. I get that younger fighters need to be brought along more slowly and test their skills at an appropriate rate. However, this is not a 23-year-old Jon Jones we are talking about. It's a former UFC champion in the cutthroat light heavyweight division. If a 47-year-old wrestler can pound out Machida, let it happen. If Shotokan Karate really isn't effective in the UFC, let's find out.

The notion that someone with Randy Couture's legendary resume would be denied a fight to shelter the "fragile" career of Lyoto Machida is not only insulting to Couture, it is insulting to MMA fans. Randy has proven that he is fighting at a level above these exhibition-style matches he has been fed lately. James Toney and Mark Coleman? Dana White has criticized fighters he believes don't want to fight the best in the world for business reasons. But Mr. President should heed his own advice. Couture might not be as good as his three-fight win streak insinuates and I don't believe Machida is as lost as his last two defeats would suggest. For those reasons and all the ones listed above, The Dragon vs The Natural makes perfect sense. Let's find out inside the cage.

There are deeper issues at play here. The UFC is battling for mainstream relevance -- we all know it. There is no sport more mainstream than the National Football League. You don't get to chose your schedule in the NFL. No one is protecting the Cleveland Browns; they have to play whomever is on the schedule. Sometimes the Browns get demolished by the Steelers. Sometimes the Browns break one off in the best team football has to offer. The point is that it gets settled on the field. That "Any Given Sunday" mentality keeps football fans coming back for more.

Roger Goodell isn't protecting Cleveland from anyone. Neither should Dana White protect Machida from Couture.