The MMA Year In Review - Part 3: The Iceman Sleeps, A Brawl In Nashville And Jose Aldo Becomes The Man

Share All sharing options for: The MMA Year In Review - Part 3: The Iceman Sleeps, A Brawl In Nashville And Jose Aldo Becomes The Man

Chuck Liddell Sleeps Again - Chuck Liddell was the man in the UFC's 205 pound division for the better part of six years. In May of 2001 he put former UFC heavyweight champion Kevin Randleman out with a punch and then went over to Japan and knocked out the very tough Guy Mezger 23 days later. From then on it was almost nothing but success for "The Iceman."

In 2007 the decline started. Quinton Jackson knocked out Liddell which was the end of Chuck's long title reign. Fast forward to UFC 115 in June of this year and Liddell was 1-4 in his last five trips to the Octagon. More disturbingly, three of those loses came by clean knockout. Liddell would be facing former middleweight champion Rich Franklin in a bout that was once a dream match but now was more of a last chance at relevance for both men.

Liddell looked better than he had in recent action for the first round, but just before the bell to signal the break Franklin landed a left hand counter and, once again, The Iceman slept.

It's certainly time for Liddell to step away from the sport. Four knockouts in three years is not good for an athlete's brain and Liddell competing against the lower end of the light heavyweight division is just not something that fans want to see.

Strikeforce Bombs In Nashville - Strikeforce: Nashville was always going to be a risky event for the promotion. They were returning to CBS with very limited star power and putting three title fights on the televised card. Everything rode on the new acquisition of Dan Henderson being able to pull in a good audience. Oh, and giving that audience something to remember.

The event started out slowly as "King Mo" Lawal took the Strikeforce light heavyweight crown from Gegard Mousasi. Mousasi attempted to engage in the striking department but was repeatedly taken down where Lawal did little damage. Lawal clearly won and his wrestling game was impressive to watch, but that's not the kind of thing that usually entertains the casual fans.

From there we saw Gilbert Melendez defend his lightweight championship against Japanese superstar Shinya Aoki. Melendez was able to avoid going to the ground with Aoki and won every round. Unfortunately, this fight also fell into the trap of being relatively boring to a casual viewer. Aoki couldn't hang on the feet but Melendez was mainly just popping Aoki without really putting him in deep trouble.

The night ended with Dan Henderson's Strikeforce debut as he took on middleweight champion Jake Shields. Henderson rocked Shields early but when he couldn't close the deal it was Shields that took over the rest of the fight with his wrestling and top game. Again, it wasn't an amazingly interesting fight to people who aren't in love with everything about the sport.

After the fight Jake Shields was doing his post-fight interview when Jason Miller came into the cage. Miller's goal was to challenge Shields to a rematch but the Cesar Gracie camp saw this as disrespectful to Shields. A shoving match broke out and the Gracie camp jumped Miller including a horrible moment where Miller was stomped while being held on the ground. No major injuries came out of the event but it was a huge black eye for the sport. Gus Johnson announcing that "sometimes these things happen in MMA" didn't make things better.

This was the last time that Strikeforce was on CBS and that is, no doubt, due to a combination of the lackluster fights, poor ratings and awful end to the night. 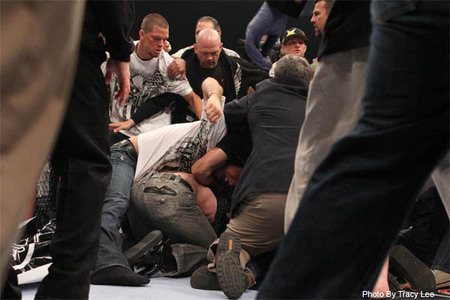 Jose Aldo Cements Himself As A Pound-For-Pound Contender - Jose Aldo had ran through everyone the WEC had put in front of him. There was no doubt that he was the clear top gun in the featherweight division. Still, he had not yet beat longtime champion Urijah Faber and had to do so to clearly establish himself as a top fighter in any division. So when Aldo and Faber met at WEC 48 there was more to be gained for Jose than simply another title defense.

Aldo brutalized Faber with leg kicks throughout the bout and was so clearly on another level that it cemented him as a top contender in the pound-for-pound rankings. Several days later Faber's leg was making it clear that leg kicks are no joke: 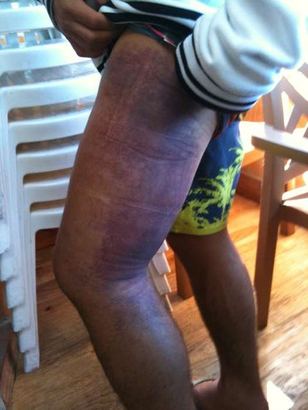