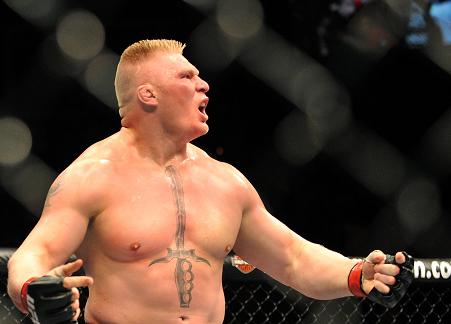 UFC 116 had the mega-main event of Brock Lesnar vs. Shane Carwin. The fight was Lesnar's first fight back since diverticulitis forced him out of action and almost ended his career. While Brock was on the sidelines recovering, Carwin was knocking Frank Mir out cold to capture the interim heavyweight title. At 116 the two giant men would meet to unify Carwin's interim title and Lesnar's heavyweight crown.

Carwin had compiled a 12-0 career record heading into the night, never once having an opponent last past the first round. There were so many questions heading into the fight. Could Lesnar handle Carwin's power? Could Carwin deal with the better wrestling of Lesnar? And what would happen if Brock could drag Shane past the first five minutes?

Shane had no intention of letting things go past the first round as he hurt Lesnar standing early and started to rain down heavy blows from the top. Lesnar responded with defensive posturing every time the referee threatened to stand the fight up and did manage to survive, and even get back to his feet, until the bell rang. Between rounds it was clear that Carwin was gassing badly and Brock looked surprisingly fresh.

In the second round Lesnar quickly took Carwin to the floor and locked in an arm triangle choke that forced Shane to submit. It was a dramatic moment that proved that Lesnar was a legitimate heavyweight. It also set Lesnar up to face another undefeated heavyweight in Cain Velasquez later in the year, but that's a story for another time.

Brendan Schaub Builds His Resume - Brendan Schaub's 2009 ended on a down note as he was knocked out by Roy Nelson in December after making it to the finale of The Ultimate Fighter. His 2010 would prove to be much better.

In March Schaub stepped back into the Octagon against Chase Gormley. Gormley had built up a decent record before his UFC debut but lost to Stefan Struve by triangle choke. Schaub ran through Gormley in under a minute to get his career back on track. Brock Lesnar's training partner Chris Tuchscherer was next up for Schaub. Tuchscherer did would do better than Gormley but not much. After slightly over a minute Schaub stopped him with strikes. In October Schaub was given the test that most heavyweights have had to go through to break through to "the next level" in the UFC's heavyweight division, Gabriel Gonzaga. Gonzaga was a former title challenger who had fallen on some harder times but still represented a stiff test for Brendan. It wouldn't be a first round KO but Schaub earned his way to a three round decision and bounced Gonzaga from the UFC.

Update: It now appears that Mir is out and Schaub will be fighting Stefan Struve at UFC on Versus 3.