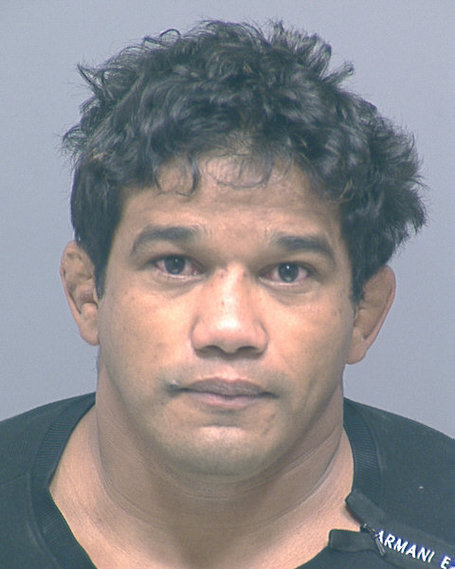 There it is in all its ignobility. Courtesy Oregon Live, here's the mugshot of former UFC lightweight contender Hermes Franca. Franca turned himself in to authorities in Clackamas County on multiple charges of sexual abuse. The basics of the case are as follows:

Hermes Barros França, who formerly lived in Oregon and ran a martial arts academy in Clackamas, is being held in the Clackamas County Jail, with bail set at $250,000.

França was arraigned Tuesday in Clackamas County Circuit Court on seven counts of first-degree sexual abuse and two counts of second-degree unlawful sexual penetration. He turned himself in Monday after an arrest warrant was issued.

I don't want to make idle speculation about what happened or prompted Franca to commit these acts, presuming he did. For now, he's innocent.

I'm also hesitant to humanize someone who could be a sexual predator. Whatever the case, I feel more genuine pity and distanced regret for Franca than UFC middleweight Chael Sonnen. I'm not sure what transgressions Franca committed here, but throughout his career he's had substance abuse problems that impacted his life and fighting career in profoundly tragic ways. Maybe Franca is more a master of image and personal impressions than Sonnen, outwardly jovial but masking an inner monster. I doubt it, though. It takes craft or serious sociopathy to pull of Sonnen's tricks.

From what I know of Franca, he's just been unable to properly manage difficulty or setback in his life. He's made bad decisions when he could've made harder good ones. He'd compound his problems and say 'I'm sorry' only to repeat mistakes by never learning from the previous ones. I don't know if he's being mistakenly charged here or he's let his bad decision making ossify into general insouciance about the needs and rights of others. I guess we'll find out.