International Connection: Surrounded By War, Shamil Zavurov Is A Product Of His People

In Dagestan, a war torn Russian republic, violence is a way of life. In the midst of bullets and bombs, M-1 Global's Shamil Zavurov trains to be a champion.

Share All sharing options for: International Connection: Surrounded By War, Shamil Zavurov Is A Product Of His People

When you think about fighting in the Russian republic of Dagestan, a steel cage or a roped ring rarely enters into the equation. For more than a thousand years Muslims have waged fierce battle to hold this area of the North Caucasus mountains. They outlasted the Mongol hordes, went toe to toe with Peter the Great, and even contested Soviet power throughout the 20th century. Today, little has changed.  As Islamic separatists gradually lost the battle with Russian authorities in neighboring Chechnya, the front of the war has moved to Dagestan and other heavily Muslim areas.

Almost entirely hidden from the eye of the American media, gunfire, car bombs, and military action sporadically pop up in Dagestan and have for nearly a decade. It was in this environment, in the mountains of North Caucasus, that I was able to touch base with M-1 Global's rising star Shamil Zavurov, a month removed from his fight with Yasubey Enomoto and already preparing for whoever steps up as his next challenger.

"High mountain training, 1700 meters above sea level in a pine forest," coach Abdulmanap Nurmagomedov said. "Dagestan is a mountainous country. It presents its own challenges and benefits. In the elevation of the mountains, we train for 45 days; this helps prepare Shamil and get him into as best as shape as possible."

Plenty of fighters talk about "iron sharpening iron." But Zavurov is a warrior truly forged in the heart of a decades long war. A devout Muslim, Zavurov is a product of his homeland, his people, his culture.

"First in my heart is my religion, sport the second. If my sporting career was to ever interfere with my religion, then I would leave competing," the rising star says through an interpreter. Ninety percent of the people in Dagestan are Muslim, but conflict between religion and sport seems unlikely. His is a martial culture, with wrestling rooted deep in the Caucasian people. "In the Caucasus, wrestling is a traditional sport. In Dagestan, I started to wrestle when I was about 5-6 years old. In 2003, we began to train and develop skills in combat sambo. My wrestling helped me succeed in Sambo."

It's Sambo that provided the base for Zavurov, a three time world champion in the sport. For five years he never tasted defeat in combat Sambo. The winning ways continued as he journeyed into mixed martial arts where he's built up a 15-1 record, including winning the M-1 Global Welterweight title last December. His lone loss was a controversial decision against Rashid Magomedov in his M-1 debut.

Zavurov is a winner - even when the odds are against him, even when he's suffered a serious injury like a broken arm that slowed him during a match with Seydina Seck in early 2010. Nothing seems to stop him mentally - he cannot, seemingly, be broken.

"I'm always mentally ready to win; with every fight there is always a possibility of losing but I do my best to mitigate making any potential mistakes," Zavurov said. While he credits Sambo with instilling a winning attitude, he recognized quickly that the two games are different.  "The main difference is time. In Sambo you have  5 minutes to do your job and win. In MMA, you have to calculate and manage the time and the energy you expel. In MMA, you have to work non-stop; it’s more difficult to me."

Zavurov's iron will was on display at M-1 Global's last show in April when he defended his title against Sengoku veteran Yasubey Enomoto in St. Petersburg, Russia. Enomoto caught him in a Kimura hold, putting serious pressure on the same arm that was severally damaged against Seck a year prior. It looked like the end of the fight - but Zavurov refused to yield. 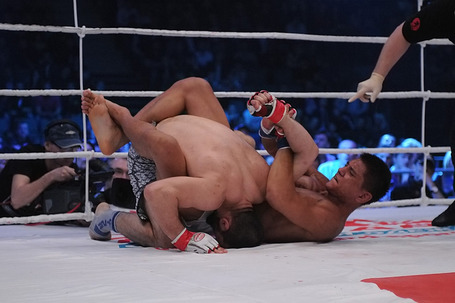 "When Enomoto had me in that kimura, I felt the support of the crowd – I could hear them yelling "Don’t give up!". I’m glad we put on an amazing show for the crowd," he said. "I never even thought about tapping out. There’s no way, I was going to give up. It certainly was in deep but I survived it – as soon as he relaxed a little but I was able to pull my arm out."

What's next for Zavurov is uncertain. M-1 is looking hard for a tough fighter to fight him. He's fought primarily other Eastern European prospects. Enomoto was a big step up in competition and he conquered that challenge, passing the test of a world level fighter with flying colors. Coach Nurmagomedov sees big things in Shamil's future.

"I feel the main things needed to be a successful fighter are a high level of commitment, an education, eagerness to learn all facets of the sport and a good upbringing," the proud coach said, adding Zavurov has all those characteristics. "He has very few weaknesses if any. He’s incredibly disciplined and gifted with natural speed and genetics."

M-1 returns Saturday with M-1 Ukraine European Battle on June 4th.  Fans can capture the action from inside the National Circus Arena in Kiev starting at 11am EST / 8am PST via live streaming telecast on the official M-1 Global website (www.M-1Global.com) and M-1 Global facebook fan page.