Share All sharing options for: John Wes Townley Charged With DUI After Car Wreck In Georgia

NASCAR Camping World Truck Series driver John Wes Townley was charged with driving under the influence after crashing his 2012 BMW into a telephone pole in Georgia, the Athens Banner-Herald reported Friday.

The incident, which occurred early Tuesday morning, came to the attention of the Oconee County Sheriff's Department when a 911 call reported "a suspicious man knocking on the back door of a home" at 4:30 a.m.

Sheriff's deputies arrived to find a disoriented Townley "swaying from side to side and bleeding from his bare feet," the report said. Townley was arrested and charged with DUI and weaving in the roadway.

The newspaper said deputies found blood on the seat of the car, which had its airbags deployed in the crash.

Townley's incident could be a blow to the 22-year-old's NASCAR comeback. The son of Zaxby's co-founder Tony Townley is attempting to revive his career with RAB Racing, which formerly fielded Nationwide cars for the driver.

RAB Racing team owner Robby Benton said he was still gathering facts about the incident and preferred to withhold public comment until he had more information about the situation.

This isn't the first time Townley has found trouble with authorities on an alcohol-related offense. In 2010, Townley was cited for underage possession of alcohol during the Las Vegas race weekend (he was a Richard Childress Racing driver then).

"I made a big mistake and feel terrible about it," Townley said at the time. "I have learned a valuable lesson and will do everything I can to make it up to those I have let down."

Townley was released from RCR due to performance issues the month after the Las Vegas incident and given a second chance by RAB Racing.

But he mysteriously left RAB during the Richmond race weekend that summer and had apparently given up on NASCAR for good.

Benton decided to give Townley another shot this season, though, and the driver is set to run a full Camping World Truck Series schedule for the team.

NASCAR had no immediate comment on Townley's incident, though it has previously allowed drivers charged with DUI to race.

The most recent example was Nationwide Series driver Michael Annett, who was arrested for DWI last February but still allowed to race at Daytona. 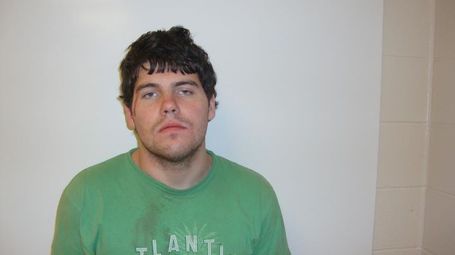