This is kind of like the ring of fire at a daredevil show. Or, perhaps, it's like a small wall of flames some crazy person would jump through. Except the fire Juan Pablo Montoya's crash ignited created a ridiculous row of fire on the track at the Daytona 500 that would dwarf a regular inferno.

This was the scene after Montoya slammed into a jet dryer.

If you missed the crash, here's video, a couple gifs of the impact and gifs of the aftermath.

So what comes next? Well, despite Darrell Waltrip's insistence that everything is just fine, this was some of the mess left by the crash: 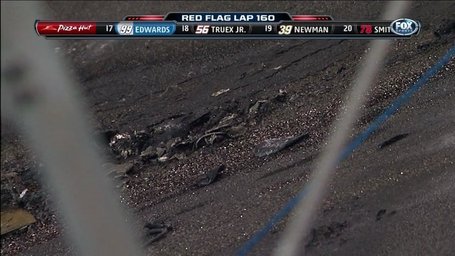 Not an expert on racetracks, but that doesn't look good. Seems like this could be an issue going forward, but NASCAR is hopeful it won't have to break out the Bondo to fill the holes.

If you're wondering how this mess gets cleaned up, the answer is a layer of speedy-dry, followed by a nice coating of Tide laundry detergent. No, seriously. They're scrubbing the track down with Tide and water.

This is the best race ever, you guys.