Brad Keselowski Takes Advantage Of Break In Daytona 500 To Tweet

When you're in the middle of your sport's most prestigious event and a freak accident involving jet fuel and fire happens, what do you do? If you answered anything other than "Pull out a phone and tweet," you are not Brad Keselowski.

Keselowski ("...who should probably put @Keselowski on his car," said someone who is totally not Darren Rovell) took to Twitter to share a picture of the fire on the horizon with his some 60,000 followers. 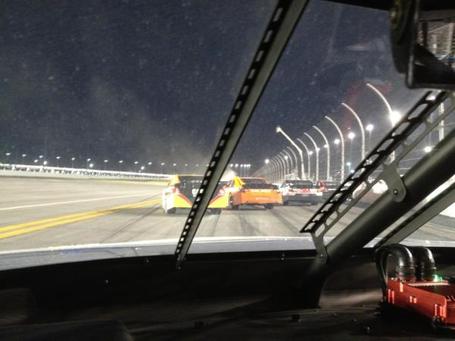 And then Keselowski kept tweeting, "probly" making history and running his phone battery down from 60% to 28% over the course of the red flag that lasted nearly two hours. And he almost tripled his following in the process.

Finally, we can update an old adage: when life gives you a massive fire that interrupts your work as a NASCAR driver, tweet about it.

If you missed the crash, here's video, a couple GIFs of the impact and GIFs of the aftermath.