You Should Watch NASCAR: A How-To Guide For The Uninitiated

We can't make you like NASCAR. If you choose to be Un-American, then that's up to you. Spencer Hall will still try his best to explain why it's a sport worth watching.

Share All sharing options for: You Should Watch NASCAR: A How-To Guide For The Uninitiated

I can't make you like NASCAR. You are either an American, or you are not. If you are not a real American who appreciates the hot death-sex of 40 cars ripping around an oval at 200 miles per hour, I both pity and forgive you, but I understand that it is a big life, and that speed, death and the ever-present threat of total vehicular annihilation are not for everyone.

I can answer some the NASCAR criticisms. You are right: NASCAR is indeed racing, and for the most part they do turn left on big semi-circular tracks. This is a common critique of NASCAR. "They just turn left!" they say, usually after this very exciting day where they ate the same food, talked to the same three people and then watched something horrible they've already seen on network television. This is a great critique, especially because it totally understands the sport, and exactly how fast the cars are going three inches away from each other's bumpers.

But sure. This makes total sense. 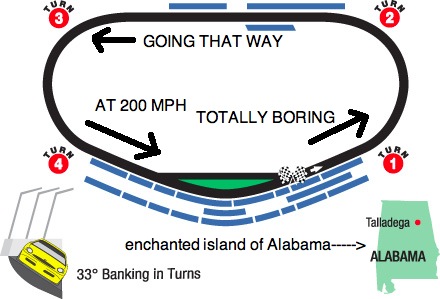 That makes complete sense, and you have me check-mated there. They do turn left, and we all know real racing is done with multiple turns and in open-wheel cars, preferably cars that turn to so much wet toilet paper when someone sneezes on them. The finesse and beauty of F1 racing is undeniably superior to NASCAR, and that is why you watch it, and not because of some deep snobbery or class insecurity on your part. Your racing preferences practically make you a lost baron! People turning slowly in jets around corners is my favorite thing, too, and that is why I love F1 and watching planes taxi at the airport.

And no, it's not really hard to drive a NASCAR racing machine. I could drive that, they might think. Sure. You could, with your vision narrowing from the speed trying to fight the car back into its line when someone decides to gently nuzzle your door in traffic. You could do that when it's 120 degrees in the car, and you can't hear anything but the roar of the engine and your crew chief bellowing in your ear about fuel mileage. You drive off the road trying to check Facebook on your phone with five full car lengths in front of you behind the mighty wheel of a Honda Accord on public roads, but I'm certain that's far more complex than trying to think with the spectre of Robby Gordon eating away at your back bumper.

By the way, if you see Robby Gordon on your back bumper, just save yourself the effort and crash. It's easier that way.

I can't make you like it, but I can tell you how to enjoy it as a complete naif with some spare time on your hands and the daring to give the sport a few test laps around the couch-track.

1. Let the TV people do the work for you. If there is one thing we can all agree on, it is that people hate to work or make effort when they don't have to. Fortunately, NASCAR's television coverage is some of the best on TV, particularly if you happen to be watching FOX. As bad as FOX Sports does some things, their coverage of NASCAR is nigh-flawless. They have cameras in the track, over the track, in cars, under cars and possibly inside Michael Waltrip's eyeballs. (Gossip! Michael Waltrip spends a lot of time looking at clouds and ducks like a stunned child.)

The talking heads are, also, by and large superb. Even the obvious local color guy, Darrell Waltrip, is substantive in the midst of saying things like 'WHOOO THEY CAME OFF THAT CURVE LIKE A COVEY OF QUAIL." Our only complaint might come from Jeff Hammond's deep and unnaturally rich tan, but that might be envy talking. He's like a barrel-chested chunk of mahogany in ill-fitting jeans, but at least he's a knowledgeable and prepared hunk of talking wood.

2. Feel free to take a breather. Another important concession is that races do involve a fair amount of going in a circle, so not all of it is essential. If you have to tune out for a bit of the race, do it, or just listen to it on the radio. The oddest thing about NASCAR is that as good as it can be as a TV product, it has always made a better radio property thanks to the insane MRN broadcasts where announcers breathlessly narrate each turn. Feel free to drop out for a while if you have to; the highlights will catch you up, and you will not miss a wreck. In fact, you will see no fewer than three jaw-dropping angles of each. They know what you're watching for, and will supply it in large quantities.

3. Not all tracks are created equal. This admission is controversial, but only in the debate over which tracks suck and which don't. It's easy to watch the superspeedways and short tracks, and the rest are kind of a muddle and matter of taste. I have no idea how anyone watches the races at Fontana. This is the kind of luxury you have in a sport with 36 different events throughout the year. Don't ever watch Pocono. It's just abnormal and unnatural to race in a triangle. 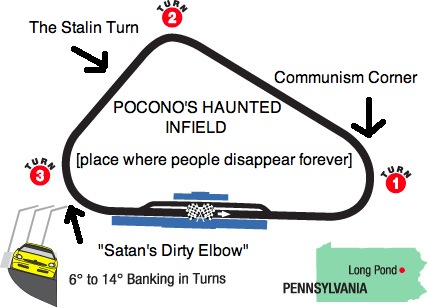 4. You are watching for a non-fatal but spectacular crash. It's OK to admit it. People like fire. People like cars flying through the air. You don't like people getting injured, but that's why the cars are built like tanks and the drivers strapped into their seats tighter than NASA test-flight apes. The friend who says they do not enjoy it -- at least a little bit -- is either a better person than you are, or a liar. They are a liar is what we're saying here. A filthy, violent liar just like you.

5. The little things in the background are half the entertainment. The drivers racing to the bathroom, or the long rain delays where Darrell and the boys discuss outlandish ways they used to cheat, or the random weirdness cropping up during a race. They're like the oddities baseball fans like to focus in on, but with the added charm of things blowing up or flying into a catch fence at the speed of a light aircraft in flight.

6. Let the driver pick you. There is a misconception that you have to have a driver. While this helps, the alliances of NASCAR work a lot like a well-written basic cable drama. Drivers at each other's throats will join up to win races, and then return to pistols at dawn the next race. Few drivers are all villain, and few are all white-hat, so let the driver of choice come to you. We're in a committed relationship with Tony Stewart, mostly because he's grumpy, kind of fat, hostile, brilliant and can't control what comes out of his mouth, but that took years of evolved viewing and evaluation. Like any serious relationship, take your time and see where the road takes you.

7. Dick Trickle Used To Light Up On Caution Laps. Remember how I said I couldn't make you like NASCAR? I lied.

Clearly, this is the greatest sport on the planet, and Dick Trickle was one of its finest princes. That is all.