Rear-View Mirror: How Is IndyCar Different From NASCAR?

Our motorsports editor mostly covers NASCAR. So after a weekend of IndyCar racing, here's a look at how the two compare.

Share All sharing options for: Rear-View Mirror: How Is IndyCar Different From NASCAR?

If you read this web site frequently, you know I'm typically a NASCAR-only guy. Last season, I covered 31 of the 38 Sprint Cup Series race weekends and have attended exactly 176 Cup races since I started in 2004 (I know this because I'm a dork and I keep track of every race I've been to).

But during this past weekend, I ventured to the St. Petersburg Grand Prix, my first IndyCar race since 2005 (and the first I've ever attended at a street circuit). So if you're keeping score, it's now NASCAR 176, IndyCar 2.

As you can guess, there were several noticeable differences between covering a typical NASCAR oval race and an IndyCar street course race. I'd like to share some of them with you now.

Oval tracks for both NASCAR and IndyCar have permanent structures in the infield which serve as buildings like the media center, where reporters type their stories and interview the drivers. Not so at a street course.

Because the street course is literally constructed on the streets of a city, all the structures are either temporary or typically used for something else.

The St. Pete media center was in a performing arts theater which shared a courtyard with a museum featuring works of the artist Salvador Dali – not exactly a familiar experience for me. Press conferences were held in the 2,000-seat theater itself and reporters worked upstairs in a large conference room overlooking a beautiful harbor.

The paddock was also in a most unusual setting: A parking garage. Since there wasn't one big area to fit all the teams and their transporters (most teams had a large area adjacent to their haulers to work on the cars), most of the teams were sheltered in a multi-story parking deck. Others set up in a nearby parking lot.

Overall, the layout was a bit crazy. But once I got the lay of the land, it wasn't too confusing to get from one place to the next.

Here's a picture of the theater used for press conferences: 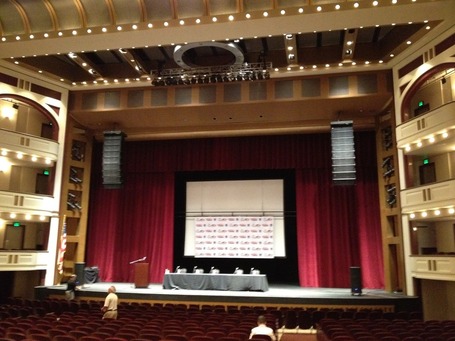 Heading into the weekend, I had heard the people who worked in the IndyCar world were generally easier to deal with than in NASCAR, which made sense to me. After all, IndyCar's viewership and attendance numbers pale in comparison to NASCAR's, so the drivers and public relations representatives have every incentive to work harder at being more accessible.

Even with my high expectations, I was still impressed. It was made clear to me that an interview with any driver could be arranged on short notice, which was surprising. In NASCAR, numerous interview requests – even over a period of months – can go unfulfilled.

But the best example of the IndyCar accessibility was IndyCar CEO Randy Bernard. I saw Bernard around the track numerous times, always shaking hands and chatting with someone. Whether it was a person who worked in IndyCar, a sponsor, reporter or fan, Bernard gave each individual the time of day and was completely focused on whatever they wanted to tell him.

My personal experience with the top NASCAR officials has been different. Despite being on the NASCAR beat for years, I've never had a one-on-one conversation or introduction with Brian France or Mike Helton (I've only talked to them in group interview scrums). Maybe that's my fault and I should try harder to develop a relationship with them, though the opportunities seem limited.

But in a single day, I had the following interactions with Bernard: 1) I met Bernard; 2) Bernard held an impromptu group interview session in the media center; 3) Bernard hosted nearly a dozen reporters at a nice dinner in St. Petersburg.

Now, I'm sure the cynical readers will say, "Well, of course! He has to kiss the media's butt! IndyCar needs all the attention it can get!" Maybe so, but I'm sure he could have spent the evening before the season opener at dinner with sponsors or team executives or any one of the other groups he needs to keep happy.

In addition, Bernard wasn't just there. He was engaged and surprisingly approachable for a high-ranking sports executive. He asked for input about the series – and seemed to take it to heart – and spent time poking fun at himself in between bites.

The best way I can phrase it to NASCAR fans would be to imagine if NASCAR vice president Steve O'Donnell (you might know him as @odsteve on Twitter) was in charge of the whole sport. That's similar to the level of accessibility Bernard offers. 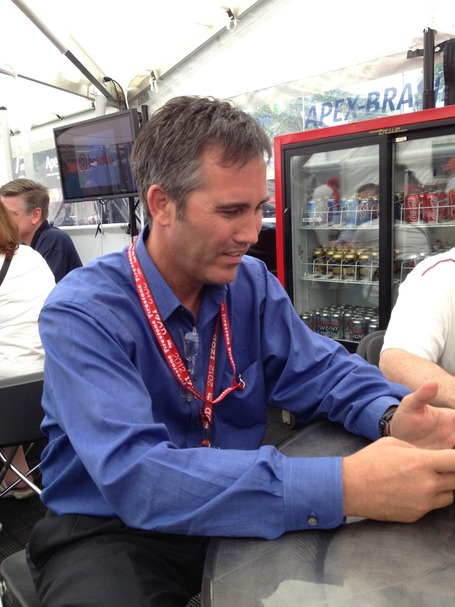 In NASCAR, drivers are whisked from place to place via golf cart; IndyCar drivers have their own motor scooters and zip through the garage on the bikes. But for the most part, the IndyCar drivers are more visible during the weekend. There was no big motorhome lot where the drivers went to disappear inside million-dollar buses between practices, so fans had a much better chance of catching a glimpse of their favorite racer.

It appeared the sponsor of every major IndyCar team had a hospitality area set up in the paddock area, complete with a wide variety of freshly prepared (and delicious) food. NASCAR sponsors entertain their guests in a hospitality village well outside the infield and far from the cars themselves.

I'm not entirely sure about this, but it seemed like every ticket was good for infield access. And once you were in the infield, apparently anyone could walk through the paddock area and watch teams work on their cars. In NASCAR, garage access is difficult to obtain.

That said, there's a reason it's possible in IndyCar: Far fewer people. I don't know the attendance numbers for Sunday's race, but I'd be surprised if there were more than 20-30,000 people there – and that was spread out along the 1.8-mile course. If NASCAR drew that type of crowd for a Cup race, people would write stories about the sport's impending extinction.

Another difference was the pre-race drivers meeting, which is a huge event in NASCAR but is closed to everyone except drivers, owners and team managers in IndyCar. While NASCAR opens the meeting to sponsors, special guests and media – and even had a public drivers meeting recently – IndyCar's version is strictly private in order for drivers to discuss important matters with series officials. I'm sure the drivers love it, but it stinks for the rest of us.

Before the race, cars are towed to their pit boxes by carts – drivers never drive from the paddock to the course, even in practice – and are then later placed in their starting positions.

Gorgeous women wearing tight clothing – and hardly any of it – are assigned to each driver on pit road, where they hold a sign with the racer's name on it. I don't know how the drivers' wives and girlfriends feel about the presence of these women right before race time, but the close-knit group of NASCAR's better halves might riot.

One of the most startling sights was watching Dario Franchitti's pit crew practice changing tires several times on the car while it was in the pit box before the race. In NASCAR, the tire changer warms up with an air gun and hub attached to the pit box; at St. Pete, the pit crew was practicing on the car itself before Franchitti arrived.

Driver introductions were held behind the grandstands in what amounted to the infield fan display area. IndyCar had a cool stage which featured a hidden platform. When the platform opened, some sort of elevator lifted the drivers up, and the field magically rose out of the floor as one. Aside from the stage, the driver introductions were mostly similar to NASCAR's (where drivers are announced individually).

There were a total of five races on Sunday – the Izod IndyCar Series race was the fourth – so fans had plenty to watch aside from the two-hour main event. In NASCAR, Sprint Cup race day is sacred and there's never a race scheduled beforehand. I like NASCAR's buildup to the race itself better, because all of the other races seem to distract from getting psyched for the primary reason everyone is there.

Were the fans into it? I don't know. The atmosphere was fun and party-like, but it was hard to tell if most people were there because they like IndyCar racing or because of the spectacle. It reminded me of when my dad used to take me to NHRA drag races to enjoy the event itself, even though we didn't know any of the drivers' names or follow the series at all.

The race itself was deemed mostly acceptable and somewhat entertaining by street course standards, at least according to IndyCar observers who know more than I do. But to my eyes, it wasn't all that exciting and was mostly a parade despite a late pass for the lead. I guess I'm spoiled by NASCAR.

For the most part, IndyCar is more open and accessible for fans and media than NASCAR is, but that's necessary given its current position in the racing food chain. NASCAR can get away with acting like a big-league sport because it is a big-league sport. If I covered the NFL, I'd probably have as much interaction with Roger Goodell as I've had with Brian France over the years.

Still, it was refreshing to get the IndyCar experience for a weekend, and I can see why open-wheel fans are so passionate about it. The problem is, there aren't enough of them to move IndyCar beyond niche sport status for the time being. IndyCar certainly knows this and is trying its best to expand the fan base.

If I had a choice, I'd love to split time between IndyCar and NASCAR because I enjoy both. But NASCAR is still king, and this is a readership-dependent business, so stock-car racing is primarily where I'll be spending my time.