OPINION: Bristol Motor Speedway Made The Best Change It Could

Share All sharing options for: OPINION: Bristol Motor Speedway Made The Best Change It Could

There was never a thought in Bruton Smith's mind to leave Bristol Motor Speedway untouched.

After last month's Food City 500, in which the stands were half-full at best, the Speedway Motorsports Inc. chairman had no choice. He had to do something, even if not everyone agreed.

And though many fans, drivers and observers won't like Smith's ultimate decision, Bristol announced Wednesday it will grind down the top lane of the track and therefore take away the advantage of progressive banking.

Where there were three racing lanes before, drivers will only have two viable options come the night race in August. The idea, said track general manager Jerry Caldwell, is to "tighten these guys up, bring 'em back together (so they're) not going to get away from each other very quickly."

If it works, it will restore some of the racing Bristol became famous for while also still allowing for multiple racing grooves; the best of both worlds, Caldwell said.

Will it please everyone? Absolutely not.

Smith said none of the drivers he spoke to were in favor of him changing the track. And after an initial onslaught of fans who demanded something be done, the final numbers were only 40 percent in favor of making the change.

But here's the thing: What's good for the drivers isn't always good for the fans. A wide track with multiple racing grooves might sound like an attractive proposition at a 1.5-mile track, but not at Bristol.

Why? Because the short track at Bristol was famous for fender-rubbing and tempers – not side-by-side racing. People filled the 158,000-seat track year after year because there was a high probability of seeing some drama.

When that disappeared after the track's reconfiguration, attendance began to dwindle. Along with the economy, Bristol was no longer a must-see race, so people saved their money for something else.

Smith is a businessman, and he plans to change that. He studied several options with SMI's engineers, and ultimately he decided reducing the degree of banking in the upper groove was his best choice. 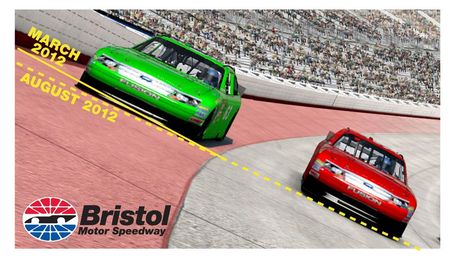 Smith didn't do anything crazy like move the walls in six feet, re-pave the track with asphalt or completely start over. But what he did do is a modification that has a chance to tighten up the racing for a relatively small cost – at least compared to a complete redesign.

Ultimately, Smith needs to fill his Colosseum of Speed. To do so, he had to appease those who felt the track was too racy – as bizarre as that sounds – and who craved the sight of twisted sheet metal and sparks flying under the lights.

Honestly, it has a chance to work. Even if the race has the same number of cautions as the March event did – the fewest since 1996 – so much about racing is perception.

If fans get the idea that attending Bristol is a can't-miss, must-see race, they'll show up. Maybe taking away one racing lane won't be a dramatic change, but it still could produce more drama.

And like it or not, that's the reality of what many fans want to watch.

By listening to the wishes of 40 percent of the fans and zero percent of the drivers, Smith's Bristol move is a decision which probably satisfies no one.

But if he can get half of the unhappy 40 percent to show up at the track while retaining the 60 percent who didn't think there was anything wrong with Bristol in the first place, the attendance numbers should go up enough to satisfy everyone.