On Saturday night, I emerged from the Richmond International Raceway infield tunnel after walking down from the press box and looked up at the scoring pylon to try and figure out who was leading the race with 83 laps to go.

The race was under caution for Jeff Burton's collision with the wall, which came in the middle of green-flag pit stops. Because of the odd timing, it was confusing to try and figure out exactly who was leading the race.

When I looked at the scoring pylon just before the restart, it said this: 99-14. That's Carl Edwards, then Tony Stewart.

Moments later, Edwards restarted the race as Stewart spun his tires and zoomed off to a huge lead. But NASCAR promptly black-flagged Edwards for two reasons: First, officials said he was not actually the race leader; second, he took off before arriving at the official restart zone.

What followed in the remaining laps, and well into the chilly night afterward, was a bunch of confusion and controversy. Did NASCAR get the call right? What really happened to set off the sequence of events?

As best I can offer it, here's my understanding and an explanation of what happened.

Why did Edwards think he was leading the race?

The reason for the confusion started with Jimmie Johnson, who had actually come off pit road first prior to the restart. But when Johnson had to serve a penalty for an uncontrolled tire, second-place Stewart was the one who inherited the lead.

The scoring pylon, though, showed Edwards as the race leader. So spotter Jason Hedlesky asked a NASCAR official on the spotters' stand to clarify the situation, and he claimed the official tapped him three times on the shoulder to indicate Edwards – not Stewart – was ahead.

Hedlesky quickly radioed this information to Edwards, who then assumed he was in the No. 1 position and figured he was in charge of restarting the race a few moments later.

"With how that pit sequence came, it was very confusing on who was the leader and who wasn't," Edwards' crew chief Bob Osborne said. "We rely on NASCAR to tell us how we came off pit road and where we were supposed to line up. Unfortunately, a late call made it much more confusing than what it really was."

So why did the scoring pylon say Edwards was leading?

All of the leaderboards you see at home or at the track – the scrolling ticker on FOX, the infield pylon or even the NASCAR.com leaderboard – are linked to NASCAR's timing and scoring system. The system relies on transponders – devices attached to the car – to keep track of the cars as they cross the start/finish line.

With one lap to go before the restart, Edwards was "scrubbing his tires" – wiggling back and forth to build up heat in the rubber – and crossed the start/finish line before Stewart, who was the actual leader.

The NASCAR timing and scoring system then picked up this information and showed Edwards as the leader (see photo below, courtesy of @kartracer3886): 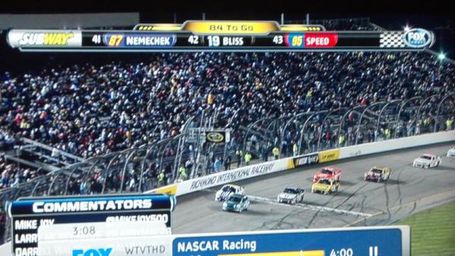 "What you've got to understand is the electronics," said Robin Pemberton, NASCAR's vice president of competition. "When the transponder crosses the start/finish line – when Carl was scrubbing his tires, he beat the 14 to the line – so that instantaneously puts him up top.

"It happens all the time, but these circumstances don't stack on top of it. That put him up on top of the board just because he was coming to the line with one to go."

What happened on the restart?

Edwards heard over the radio he was leading the race, and he was immediately frustrated. Why? Because if he was the leader, he wanted to choose the inside line for the restart – not the outside, where Stewart would likely beat him into Turn 1. But there was no time or opportunity to do so, due to what he assumed was a late call by NASCAR.

As a result, Edwards was over-eager on the restart. He "jumped" the restart – accelerating early before arriving in the official restart zone – and Stewart either lagged back intentionally or spun his tires to emphasize Edwards' decision to NASCAR officials.

At every NASCAR track, there are a series of lines painted on the wall near the start/finish line. The set of double red lines indicate the start of the restart zone, and the leader must get to that point before he takes off.

Sometimes, the leader takes off a bit early and NASCAR issues a warning not to do it again. But NASCAR can certainly issue a black flag for jumping the restart if it chooses, and officials said Edwards was clearly in violation of the rule – which is backed up by video evidence.

In other words, NASCAR says Edwards' argument about being the leader is a moot point; even if he was leading, he still broke the rules by going too early on the restart.

However, it's worth wondering: If Edwards really had been the leader, would NASCAR have black-flagged him in that situation? We'll never know, but that would have been somewhat unusual based on similar instances in the past.

Did Edwards have a reason to be upset?

Absolutely, because what happened during Saturday night's race certainly was not his fault.

After leading just one lap the entire season – and that came during green-flag pit stops at Kansas – Edwards was finally having a performance worthy of his status as a preseason favorite.

He had led 206 laps and figured to be a contender for the win no matter what happened on the final restart, but the whole sequence of events put him in what he called a "difficult spot."

"I thought I made the right decision," Edwards said. "Jason Hedlesky told me I was the leader. I did everything I could to beat Tony down into Turn 1. ... I had no clue they were going to black-flag me afterward, otherwise I would have gladly drove down into Turn 1 in second (place)."

Edwards said he hoped for "an apology" from NASCAR for the misunderstanding, but was frustrated and upset when NASCAR held firm to its decision in a meeting afterward.

The Roush Fenway Racing star now has not won a Sprint Cup Series race since March 2011, and it's understandable he was upset.

So did a NASCAR official really tell Edwards' spotter the No. 99 car was leading?

NASCAR said there was no evidence to support Hedlesky's claim – even though the spotter was emphatic about what happened – and argued the team should have known Stewart was the leader.

"We're coming to the restart and there's a lot of finger pointing up there, and everybody has to look at the scoreboard," Pemberton said. "But you really have to look at the fact of coming to one to go, they knew the 14 was the leader and the 99 was second. It's as clear as that."

In hindsight, what could NASCAR have done differently?

Because of the confusing sequence, NASCAR could have waved off the green flag and made sure everyone was clear on the proper restart order.

If that had happened, Edwards likely wouldn't have jumped the restart because he would have known Stewart was the leader.

"When you have to make a split-second decision based on when information is coming over the radio, it's a lot harder than when you have time to digest what's going on," Osborne said.

What NASCAR could not have done is go back afterward and place Edwards higher than his actual 10th-place finish – even if officials admitted they were wrong (which they certainly did not).

Even Osborne seemed to understand there was little that could be done before he and Edwards met with NASCAR in the Sprint Cup Series hauler.