Rain showers associated with an approaching cold front will move through Michigan International Speedway this morning and could have an impact on today's NASCAR Sprint Cup Series race. Even with the morning rain, we will have a NASCAR race this afternoon.

Most of the rain will take place during the morning as showers and storms break up and become more scattered, then exit with the cold front sometime between 11 a.m. and 2 p.m EDT. If the rain doesn't clear until 2 p.m. or later then we would be looking at a possible delay. Even with a delay, sunset is at 9:15 p.m. there should be plenty time to get the race in later this afternoon if it can't be started on time. 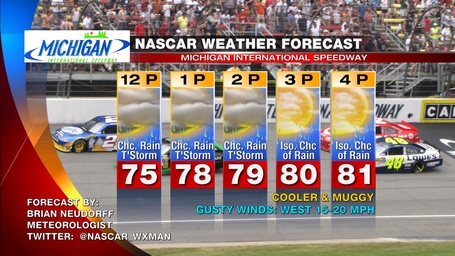 I think we have a 60-70 percent likelihood of starting the race on time. Most, if not all, of the rain could be east of the track by midday. From what I have seen during the overnight, I expect some of the rain to even break up and become more scattered as it moves through mid-to-late morning.