NASCAR At Pocono 2012: Rain Likely For The Pennsylvania 400

Share All sharing options for: NASCAR At Pocono 2012: Rain Likely For The Pennsylvania 400

The headline above says it all: Rain is likely for NASCAR's Sprint Cup Series race at Pocono Raceway today. I was tracking showers and storms through Saturday evening and into this morning, and it's just a matter of when will it rain – not if it will rain. 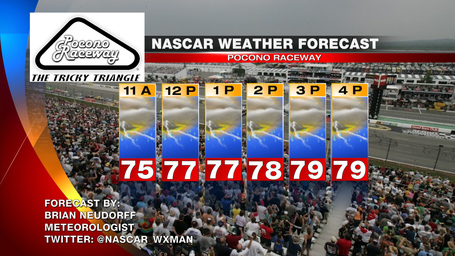 Showers and storms are likely this morning across central and eastern Pennsylvania. Once the first round comes through, there could be a break. The length of that break is unknown. Once we get into the start of the race and the afternoon, more rain and showers are possible to move through sometimes between 2 p.m. and 5 p.m. EDT.

Will we get the race in at Pocono Raceway? That's the main question everyone will be asking me this morning. It could go either way, but it all comes down to timing and development of afternoon storms and showers, as well as breaks long enough to even dry the track.

From all that I am seeing it doesn't look real promising. I give NASCAR a 30-50 percent probability of starting on time. The same odds – if not a little less – apply to getting to halfway. The likelihood of seeing a full race at Pocono Raceway this afternoon appears to be less than 30 percent.

I'm stopping short of declaring this afternoon's race a washout, but if it happens, I won't be surprised.

There are no lights and SUNSET is around 8:12 p.m. EDT