With the Snowball Derby right around the corner, SB Nation will relive the most famous moments of the event, leading up to the race itself which takes place on Sunday, Dec. 8 this year.

Next up on our Snowball Derby countdown is the story of Ronnie Sanders' only victory in the Snowball Derby -- in 1977 -- and how it was originally awarded to Darrell Waltrip.

Waltrip still believes he won the race and stubbornly never gave up his trophy and never was going to do so until he got paid his money.

Needless to say, Five Flags Speedway never paid Waltrip the winner's share of the purse as they erroneously spotted him an extra lap on the field. As a result, "Jaws" still has the trophy and still fancies himself the 1977 Snowball Derby champion.

The story is better explained by Waltrip and Sanders themselves in a video shot by Speed 51. It's a doozy so sit back and enjoy!

The 1977 race was pretty stacked in hindsight.

Going deep through the field, you'll also find a young Dale Earnhardt, Mark Martin, Bobby Allison and Rusty Wallace -- and a slightly younger Red Farmer. The complete results of the 1977 race can be found at the bottom of the post.

Below is a photo of Mark Martin's car from that race. 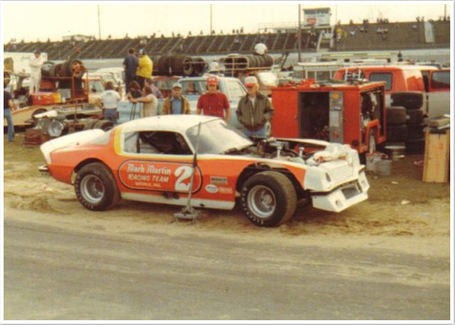 Continuing coverage of the Snowball Derby can be found on the Ranting and Raving short track blog. Visit our Facebook page for all the updates and links to our stories leading up to the Super Bowl of Short Track Racing.

The 46th Annual Snowball Derby is set for Sunday Dec. 8, 2013 with the green flag dropping at approximately 3 p.m. EST.