For the last 21 years Bobby Labonte has competed in every Daytona 500. His streak, however, was in danger of coming to an end as he had yet to secure a ride for the 2014 season.

That changed Tuesday, as Phoenix Racing announced it will field a second car for Labonte in the Feb. 23 season-opening race at Daytona International Speedway. The 2000 Cup champion has driven for Phoenix Racing twice previously including a single start this past season.

"I am grateful and excited to return to Daytona with Phoenix Racing," Labonte said. "The Daytona 500 is obviously a special event for everyone involved in the sport. I can't wait to get back in the car for my 22nd Daytona 500." 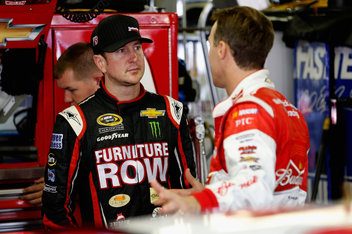 NASCAR’s Silly Season: Who went where and how they’ll fare in 2014

Phoenix Racing was purchased by Harry Scott Jr. in August from James Finch, who maintains the position of chairman emeritus of the single-car organization and will be listed as Labonte's car owner.

Rookie Justin Allgaier is expected to drive Phoenix Racing's primary No. 51 Chevrolet in 2014. No car number, crew chief or sponsorship details were revealed for Labonte, who according to a statement will run a "number of races" for the team.

"James continues to be a valuable part of our team and when he came up with the idea of running Bobby in a second car, I jumped at the opportunity to bring him back into the fold," Scott said. "Bobby is a veteran driver that can also provide valuable insight and leadership for Phoenix Racing."

Labonte lost his ride at JTG Daugherty Racing following the conclusion of the 2013 season. He has not won a Cup race since 2003, and with his prospects of finding a full-time ride grim, has openly talked about pursuing a ride in either the Nationwide or Camping World Truck Series

Twice Labonte has posted top-five finishes in the Daytona 500 with a second-place to Dale Earnhardt in 1998 and a fourth in 2011.

• Analyzing NASCAR's silly season and who went where

• The No. 3 car is returning to the NASCAR Sprint Cup series

• Upgrades coming to Indianapolis (but no lights)

• How to drive sideways: The Amateur goes to rally car school