They’re called the Kentucky Boys, and every year they host the biggest party at the Daytona 500 with excessive amounts of beer, fun and frivolity.

DAYTONA BEACH, Fla. -- You wouldn't be wrong if you thought Daytona International Speedway was teaching a class in Tailgating 101. Anywhere you look, there are myriad RVs, campers and the like spread across the expansive infield in anticipation for Sunday's Daytona 500.

Leave it to a group of guys from Kentucky, however, to take tailgating to the next level.

Dubbed the "Kentucky Boys," Denny and Greg (who asked we not use their last names) have for the 11th consecutive year erected a full-scale bar alongside their campsite. Though they technically don't sell liquor -- that would require a license and who has time to apply for one of those? -- what Denny and Greg do have is a seemingly endless supply of booze that they are happy to share with whomever stops by wanting to partake.

And with satellite TV, a stereo system, good company, an excellent view of Turns 1 & 2, and even a disco ball hanging from above, there really isn't anything the "Kentucky Boys" bar doesn't offer.

"This is a way to meet people," Denny said. "People show up, we toss them a beer, ask them if they want another one and we become friends. People used to come out and they'd start hangin' and it just grew and grew. 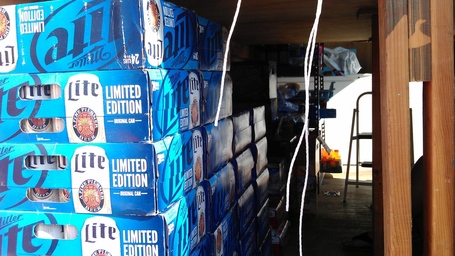 That's a lot of friendship.

Through the course of five days the "Kentucky Boys" will go through upwards of 130 cases of beer. And if beer isn't your thing, Denny and Greg's establishment has a fully-stocked bar complete with assorted liquor -- including, of course, homebrewed moonshine.

As one can imagine as day turns to night and the alcohol flows, the shenanigans increase.

On occasion a NASCAR driver or two will make an appearance, and it isn't an uncommon sight to see a topless woman dancing on the bar, which Clint Bowyer gleefully tweeted about last year.

5:20pm 4 girls in bikinis dancing atop a homemade bar in the infield. #nascarfansrock

Another driver was kicked out by Denny and Greg after becoming unruly. He showed up the following year to make amends by dropping off a pallet of a certain beverage that he endorsed.

"It's just neat," Greg said. "It's a way to meet people and have fun. What's cool is that it's people from across the country -- we have friends everywhere now."