NASCAR fans answer 'What is Dogecoin?' at Talladega

Josh Wise will be driving a Dogecoin-sponsored car on Sunday at Talladega. But what is Dogecoin? Jordan Bianchi set out to see what NASCAR fans knew about Wise's sponsor for the weekend.

Share All sharing options for: NASCAR fans answer 'What is Dogecoin?' at Talladega

TALLADEGA, Ala. -- Have you heard of Dogecoin, the latest Internet sensation that is now a NASCAR team sponsor? If you haven't, you're not alone, as evidenced by the sampling of fans SB Nation spoke with Friday at Talladega Superspeedway.

-- "I don't know what this is? Is that something to do with dogs and cats? Because I hate anything that illustrates an obsession with dogs & cats."
Robert, Geneva, Alabama

-- "Is that made up? Sounds German."
Jonathan, Northport, Alabama

For the uninformed, Dogecoin is cryptocurrency (digital currency) that any person, business or charity can send. Although cryptocurrency has very little value by itself, collectively it can be exchanged for tangible products or services.

What is Dogecoin, really?

A helpful explainer to the world of cryptocurrency from our friends at Vox.com.

What is Dogecoin, really?

"You said Doge and not Dodge, as in the car?" (Stares blankly.) "Is this thing legit? It's not a pyramid scheme or anything? Seems fishy; I'm skeptical."
-- Jon, Birmingham, Alabama

"So you get fake money on Internet that can become real money? How can I get some of that? Just tell me where to sign up."
-- Nikki, Atlanta, Georgia

Among the many things Dogecoins have helped support is the Jamaican bobsled team in the most recent Winter Olympics. And this weekend, Dogecoins are sponsoring Josh Wise and his underfunded No. 98 Phil Parsons Racing team.

Like many, Wise hadn't heard of Dogecoin until a couple of months ago. But his plucky performance in a couple of races -- most notably at Bristol Motor Speedway, where he fought to stay on the lead lap racing against some much bigger names  -- caught the attention of some members of Reddit, an online community where members interact, share, submit and vote for various stories.

"All I know is that this is how the (Jamaican) bobsled went to Olympics. Pretty cool they're in NASCAR now. Hopefully they can stick around and help Josh."
-- Sarah, Gastonia, North Carolina 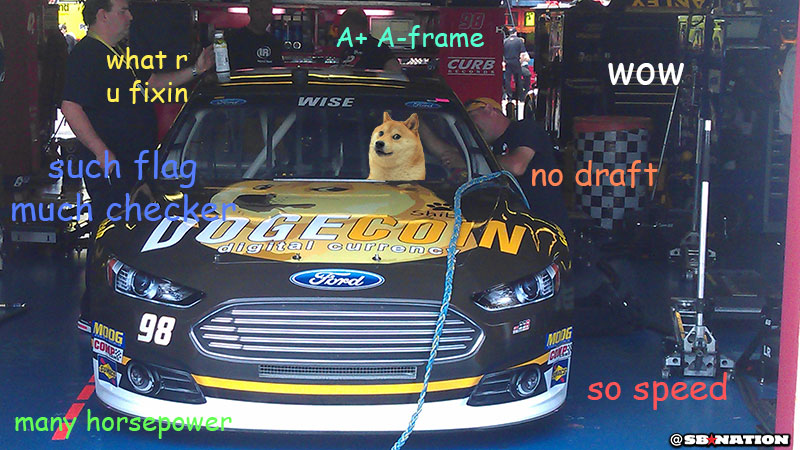 Again, it's OK if you're confused.

-- "I don't know much about it. To me, it seems fake with very little to no value and that it really hasn't caught on like some people thought it would."
Kip, Talladega, Alabama

"Seeing the dog on the hood makes me think it's something to do with that, but why would a dog food company care about NASCAR?
-- Alice, Highland Village, Texas

Inspired by Wise's performance Reddit users decided to take up a collection of Dogecoins to help fund Wise's team, which most weeks is devoid of sponsorship.

"It was pretty unexpected," Wise told SB Nation on Friday. "Some people posted some notes about us running pretty well for not having sponsorship. It just went viral. I don't even understand how it happened the way that it did. It's amazing."

Joey Logano slices to No. 1

A Richmond victory vaults Joey Logano to No. 1 in the weekly NASCAR power rankings.

Joey Logano slices to No. 1

Initially, Wise didn't think anything of it, assuming there was no way enough Dogecoins could be collected to match the equivalent of $55,000, the cost of funding the No. 98 team for a single race.

The money was raised in less than a week.

"Within the first day or two we kind of took it lightly because it was a pretty big goal they had," Wise said. "But as we started to talk to some people involved in the community and just watch what was going on, we were like, ‘Wow, this might happen.' And before we knew, it had happened."

It's a lack of awareness that isn't unique.

-- "My daughter collects those. I don't get it, but whatever. She's happy."
Traci, Vonroe, Tennessee

-- "It's currency that dogs use."
Lori, Warner Robins, Georgia

The unfamiliarity runs both ways, as many who donated Dogecoins were equally oblivious to NASCAR.

And as NASCAR fans have become more cognizant about cryptocurrency, those involved with Dogecoins have become enamored with Wise's upstart team.

"There are so many dynamics to it that make it special," Wise said. "I guess they chose me because it fit their brand for what Dogecoin is -- a new cryptocurrency that's trying to grow. And we're a young race team that's trying to progress. I guess we all have similar objectives."