NBA Draft 2011: Derrick Williams Has No Position, Which Is Exactly How He Likes It

Derrick Williams is one of the top prospects in the 2011 NBA Draft, but what position does he really play? If it were up to Williams, that question would be irrelevant.

Share All sharing options for: NBA Draft 2011: Derrick Williams Has No Position, Which Is Exactly How He Likes It

NEW YORK -- Derrick Williams' suit is gray, and his tie is black. A white wristband dangles from his right arm. His sleeves get bunched up as he leans forward to answer questions from the assembled media one day before the 2011 NBA Draft. At one point, he puts his left arm on the table and reveals a series of gold letters on his white shirt. The letters are "DLW," and as he points out to everyone, they are his initials.

It was an ensemble that outdid many of his peers, and it was all a part of Williams' deliberate attempt to sell himself as the kind of unique player that has little to do with many of the forwards that came before him. It was also in stark contrast to the one time earlier in the week when he veered off message with his attire.

"I was doing the ESPN thing [Sports Science] in Bristol, Connecticut [Monday], and my bags didn't arrive," Williams says, referred to a taped appearance on Monday. "I had to get a shirt from I forget his name -- Wiley, the football player?"

He is reminded that he meant ESPN analyst and former NFL defensive lineman Marcellus Wiley.

"Marcellus Wiley. Yeah. I had to use his shirt. It was a little big. The sleeves were a little long," he said. "But I got my clothes back."

It was a minor hiccup in Williams' two-part message to the world, one he has made with as much polish as his media day ensemble. First, Williams believes he's as good as anyone in this draft, and will likely be proven right when he is taken within the first three picks. Second, and more importantly, he's not a post player, but rather, a perimeter player, a hybrid forward, even a small forward if you want to get really technical. Despite measurements that are comparable to most power forwards, Williams has maintained that his best attributes are more like a classic small forward. But don't ask him to classify himself.

"My whole life, I've been labeled as multiple positions and multiple spots on the offensive and defensive sides," he says. "That's why I've had so much success." 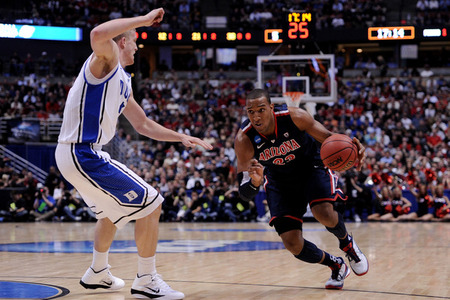 To understand why Williams has been steadfast in this belief, we have to understand how he got to this point. As recently as 18 months ago, when he was just emerging as a freshman at Arizona, Williams wasn't even on anyone's radar as a professional prospect. His high school, La Mirada High, hadn't produced any Division I basketball players in nearly a decade when he starred there. Despite being the best player on his team, coaches ignored him. The only reason he even got a scholarship offer from USC was because then-coach Tim Floyd happened to see him play on a trip to see DeMar DeRozan and was impressed enough to keep him in mind.

Williams did manage to play on a more highly-regarded AAU club in Team Odom. But there, he suffered from a different problem: he was getting lost in the shuffle among other top prospects. Specifically, he was being outshined by one man: Jordan Hamilton, the Texas swingman who is also a potential lottery pick this year. While most eyes were glued to Hamilton, Williams didn't get many shot attempts. Since he couldn't force Hamilton to stop shooting, he had to find other ways to get noticed.

"At the AAU level, everyone wants to get noticed, and I wasn't getting noticed as much as Jordan," Williams says. "[So I decided] if he was going to shoot, the times he missed, I was going to get the rebound. I just tried to do other things to help the team win, and that's what I did."

Still, few noticed him, and he was all set to go to USC. But then Floyd left, and Williams asked out of his commitment. Arizona, needing bodies after switching coaches, gave him one of its open roster spots, not thinking he'd make much of an impact.

He quickly proved otherwise in a banner freshman season, averaging 15.7 and 7.1 rebounds while playing mostly on the inside. The problem was that Arizona went just 16-15. It was after that disappointment that Williams truly was able to get to the next level as a player.

"Coach [Sean Miller] told me that for us to get to that elite level, I'm going to have to play big, demand the ball and be more of a leader," Williams says. "I took that leadership role, and it turned out pretty good."

He ultimately had to recover that selfishness he once had before his AAU experience. Last season, he did just that, carrying Arizona to the Elite 8 while averaging 19.5 points and 8.7 rebounds per game. While an attitude adjustment, fueled by a midseason tirade by Miller where he was called out for his defense and leadership, helped Williams, an on-court adjustment did too. The Wildcats began using Williams more as a perimeter player and as a face-up scorer, and it made him and his teammates better.

"I was getting double teamed, so we just had to try to do different things to try to get me and my teammates open," he says. "Being on the wing on the college level was the best spot for me." 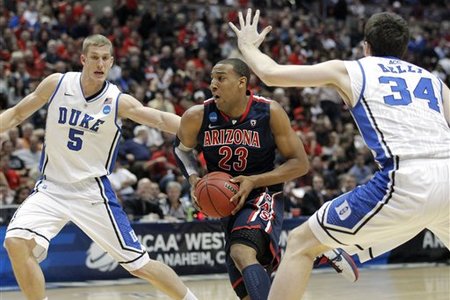 It is against this backdrop that Williams is trying to tell everyone that he is a perimeter player. In his mind at least (and probably in reality), he only really came into his own when he started playing more while facing the basket. So why not keep that going?

This has caused some to grow concerned about whether he understands his role. To Williams, though, his role is simple: he's a hybrid forward that fares better on the perimeter than in the post, but is capable of doing pretty much everything well, especially offensively (which is backed up by the numbers). OK, so that's not actually simple, but it's how he sees himself.

"Just being able to do multiple things on the offensive side, and guarding multiple positions," he says when asked to define his biggest strength.

In this way, Williams is lucky he plays in 2011 and not 1981, 1991 or even 2001. In those days, Williams would be considered a "tweener," someone too small to play inside, but too slow to play on the perimeter. It's why many talent evaluators have disagreed when trying to find a historical parallel to Williams. But in 2011, the responsibilities for forwards have changed. Most power forwards spend more time facing the basket than in the paint. Small forwards do all sorts of different things, with Shawn Marion playing very differently than, say, Kevin Durant. If Williams is to be an integral part of a great team while being himself, now is the perfect time to do it in the NBA.

Williams himself is very aware of this too. He came prepared with a series of current examples to prove he can succeed as a hybrid forward, mentioning names like Dirk Nowitzki, Lamar Odom and Antawn Jamison. Williams probably doesn't play quite like those three, but the larger point still stands.

"That's the thing," he says. "Ten to 15 years ago, you had to play that position, whether it's a 5, 4 or 3. Nowadays, there are so many great players who do different things on the court. You really can't label Dirk Nowitzki a power forward."

Obviously, there will be some matchups where Williams will struggle if he plays as a post player. He says he'd prefer to guard a bigger small forward than a guy like Pau Gasol, for example. He also says he figures he'll get his points on three-pointers and drives to the basket, leaving post-ups out of the equation. So in a classic sense, he would rather be a perimeter player than a post player.

But in 2011, playing power forward, he can get away with that. He's not an elite rebounder, but he is still pretty good and capable of snatching boards out of his zone. Defensively, he has quick feet, and will be able to devote more energy to that end with a smaller offensive load. There may be a couple tough matchups for him, but he should be able to deal with with most of the forwards that populate the league. And offensively? Good luck trying to stay in front of him when he's so good as a pick-and-roll player, can shoot from deep and has his incredible knack for drawing fouls.

Maybe his sales mission is working. 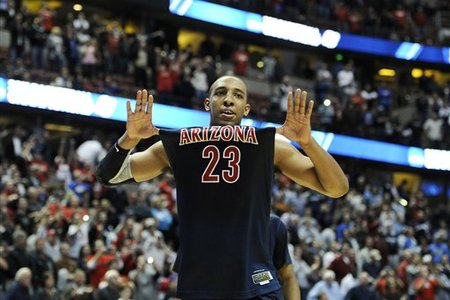 The job over, Williams begins winding down his interview session. A woman informs everyone left that Williams has a prior engagement for which he is tardy. Williams starts to leave, but not before answering the kind of question you hear at these kinds of media events. What's the one question you'll be happy not answering anymore?

Williams' answer is about where he'd like to be drafted, since he has no control over that. I can't help but remind him of the other question he's probably tired of hearing: just what position do you actually play?

"Yeah, that too," he chuckles. "I'm tired of answering that question."