NBA Season Opener Viewing Guide: The Heat, The Celtics And The Significance Of The First Game

Forget all the hype. How much does an NBA regular-season opener actually matter in the grand scheme of things? If we use last year as a lesson, it actually matters more than you'd think.

Share All sharing options for: NBA Season Opener Viewing Guide: The Heat, The Celtics And The Significance Of The First Game

The 2010-11 NBA season tips off tonight with the first three of the 2,460 games that will make up the season. The first game pits everyone's paper champions, the Miami Heat, against last year's Eastern Conference champions, the Boston Celtics. The second game pits the NBA champions, the Lakers, against an intriguing Houston Rockets team. If you have NBA League Pass, you can also enjoy a first-round rematch between the Portland Trail Blazers and the Phoenix Suns. Everyone's excited, as they should be.

But when you put it the way we put it in that first sentence, it doesn't sound like tonight means much of anything in the grand scheme of things. So does tonight? In a way ... no. An 82-game season is a marathon, not a sprint. No team understands that better than the Boston Celtics, who purposely rested at times during the regular season last year to stay fresh for the playoffs. Boston perfected something few teams are able to perfect: the ability to flip a switch on and off whenever they wanted. Clearly, the Celtics won't make too much out of one win, even at the beginning of the regular season.

But in a way ... tonight really matters. To illustrate this, let's flash back to last season. TNT's opening-night doubleheader featured a marquee matchup between the league's paper champion and the old, reliable Celtics. Last year was supposed to be the Cleveland Cavaliers' year, and their home opener was as anticipated a home opener in the city in years. The Celtics were somewhat under the radar, having made little noise in the offseason. And yet, it was the Celtics that enforced their will on the game and came away with a 95-89 win. The Cavaliers' offense as stagnant, while the Celtics were firing on all cylinders.

Don't be surprised to see a repeat of sorts tonight. The Heat are clearly the most talented team in the league, but they enter tonight's game lacking the kind of continuity they would have liked. Dwyane Wade missed pretty much the entire preseason with a hamstring injury, and LeBron James also was banged up a bit. Mike Miller, the guy who was supposed to space the floor for Miami Thrice, is out with a thumb injury.

Meanwhile, the Celtics are healthy, cohesive and looking to make a statement against the league's most hated team. They did it last year when they beat the paper champions. Playing at home, they're certainly capable of doing it again. 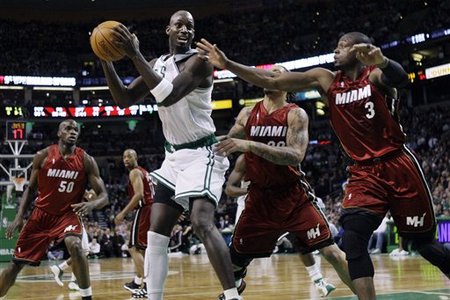 The Heat's offseason, in one sentence: LeBron James, Dwyane Wade and Chris Bosh.

The Celtics' offseason, in one sentence: They geared up for one more big run, and added some insurance up front and in the backcourt to make it happen.

Miami's major advantage: With LeBron and Wade on the wings and Bosh running the floor, the Heat are an extreme version of the athletic clubs that gave Boston problems last year. Remember, the Celtics lost four times to Atlanta, and they got run off the floor by Memphis and Washington late in the year.

Boston's major advantage: In a rare role reversal, it's the Celtics that are healthy. Miami has played the entire preseason without Wade. Boston has been together the whole time, and that will make a difference.

Totally inconsequential thing I want to see happen: LeBron James and Delonte West walk within five feet of each other. It's too bad West is suspended. 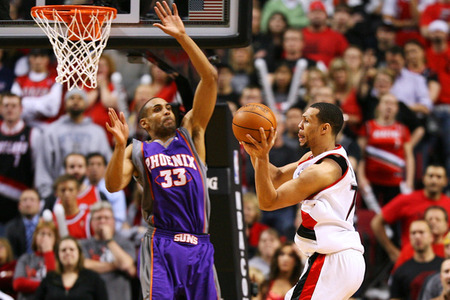 The Suns' offseason, in one sentence: Amare Stoudemire was replaced by Hedo Turkoglu, Josh Childress and Hakim Warrick.

The Blazers' offseason, in one sentence: No more Kevin Pritchard=overpaying Wesley Matthews and dealing with players who want more playing time.

Phoenix's major advantage: The Suns were able to slow the Blazers down in the playoffs by putting bigger players on Andre Miller and Brandon Roy (when Roy played). With the addition of Josh Childress and the return of Grant Hill and Jared Dudley, the Suns now have three guys they can put on those two players.

Totally inconsequential thing I want to see happen: Keep an eye on Rudy Fernandez before the game. If you see him saying hi to Steve Nash, it's probably because he's begging for Nash to convince the Suns to trade for him.

Where to interact with fans while watching: Bright Side of the Sun is SB Nation's Suns blog, and Blazers Edge is SB Nation's Trail Blazers blog. Also, check out SB Nation Arizona's StoryStream.

Prediction: Portland's size will be too much for the Suns. I'll say they win 98-88. 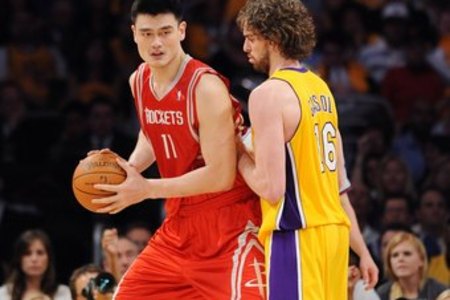 The Rockets' offseason, in one sentence: Yao Ming is slowly coming back, so they decided to add more depth to their already-deep roster

The Lakers' offseason, in one sentence: They got a couple role players and let their stars heal slowly.

Houston's major advantage: When these teams played in the playoffs two years ago, Houston's speed posed major problems. When Yao is in the game, that might not matter, but when he isn't, the Rockets might be able to race past the Lakers.

Totally inconsequential thing I want to see happen: Hey, so remember when Ron Artest was on the Rockets? That introduction should be fun.

Where to interact with fans while watching:  The Dream Shake is SB Nation's Rockets blog, and Silver Screen and Roll is SB Nation's Lakers blog. Also, check out SB Nation Houston and SB Nation Los Angeles.

Prediction: LA is still finding their way. I say Houston steals it, 102-97.