PHOTO: Justin Bieber With His Lakers Championship Ring—Wait, What?

Share All sharing options for: PHOTO: Justin Bieber With His Lakers Championship Ring—Wait, What? 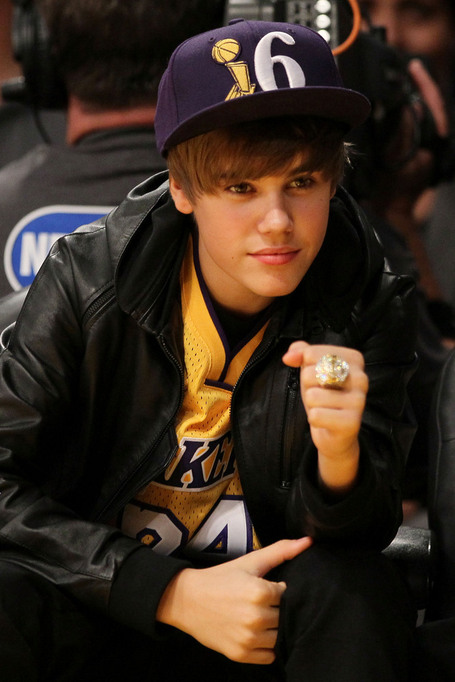 GOD HE'S SO DREAMY AND PERFECT.

Err... What? Where were we? Oh, yeah. Justin Bieber somehow got his hands on a championship ring during last night's Lakers game and—OH MY GOD I JUST WANT TO SCRUNCH HIM UP INTO A LITTLE BALL.

This is because Biebs is clearly evil—OR BECAUSE HE'S CLEARLY ADORABLE?—and destined to lead a life that inexplicably surpasses every scene from your wildest dreams. A rave with Kanye West, David Beckham, Ghostface Killah and Barack Obama? If he hasn't been already, that'll probably happen next month. And while most of us would just be happy with Lakers tickets, Biebs is courtside and wearing the championship ring. Pure evil.

DON'T YOU JUST GET LOST IN HIS EYES?

How'd he get the ring? Video after the jump.

Jeannie Buss, Phil Jackson's significant other and daughter of Lakers owner Jerry, was also sitting courtside during last night's game. Phil gave her his ring to wear during the game, but then, after TNT's Cheryl Miller approached her for a look at the ring, Buss explained, "Justin Bieber asked to borrow it, so... I couldn't say no to Justin Bieber."

OF COURSE SHE COULDN'T SAY NO TO JUSTIN.

Yes, of course she couldn't say no to Justin. The greatest trick the devil ever pulled was convincing the world he was just this precocious little tween from Canada that would never harm a soul, and was just happy to be there and have a chance to share his gifts with the world, and hey, where's Justin Bieber going with that ring?

And then you say softly to yourself, "Bieber wins again. Bieber. Wins. Again."