John Wall Dazzles Magic Johnson, Carries The Wizards, And It All Feels Normal

Share All sharing options for: John Wall Dazzles Magic Johnson, Carries The Wizards, And It All Feels Normal

While Magic Johnson watched from the stands, John Wall scored 19 points and had 13 assists as the Wizards coasted to victory vs. the Houston Rockets in Washington Wednesday night. Oh, and Wall also had 10 rebounds. And six steals. And only one turnover. And this alley-oop.

During the Wizards' postgame show, Phil Chenier even complimented Wall on his "sticktuitiveness," which isn't technically a word. But can you blame him? Wall has proven he can score, he can pass, he change the game on defense, and he can (apparently) rebound, too. What else is there to say at this point?

They should just rotate Hall-of-Famers visiting the Verizon Center so that sportswriters can pretend to come up with interesting ledes. In front of Oscar Robertson... In front of Bob Cousy... In front of Walt Frazier... In front of John Stockton... Gary Payton... Isiah Thomas... As John Wall's career unfolds, something tells me he'll dazzle whoever bothers to watch. So fly 'em in, because writers will need fresh angles for this one.

How many times can you say he's the most athletic point guard we've ever seen? How many different ways can we compliment his scoring while marveling at his ability to stay true to the point guard position? And doesn't it get old adding at the end, "people forget about his steals"? How many times must we gush over his serene self-confidence at just 20 years-old? 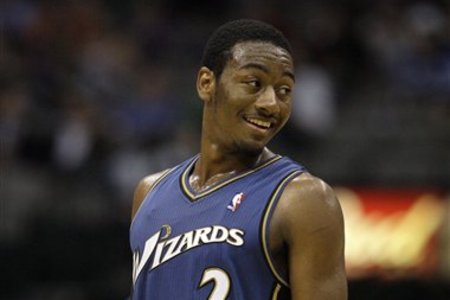 That's what was most remarkable about John Wall's game last night. Watching him work against the Rockets, it didn't feel that special. He picked apart the defense with his passing, picked his spots to score, and pounced on Rockets passes all night. But that's just what John Wall does.

For now, we don't think of him in the same category as LeBron and Kobe and Kevin Durant and every other transcendent superstar from this generation. But what makes those guys transcendent is that "great" is their "normal." And watching John Wall last night, that's what stuck with me. Here was this forgettable game in November, Wall's mediocre Wizards battling a forgettable Rockets team in a matchup of low-lottery teams. And in a ho-hum game, there was Wall, going about his business, ho-hum, and hanging a triple double on Houston.

So, not to condone Colin Cowherd's race-baiting criticism of Wall last week, but I understand where he was coming from when he said:

"I’m gonna call out John Wall….Before the game started, he spent 34 seconds doing the Dougie. That tells me all I need to know about J-Wow. Then he opened his mouth later and confirmed it: not a sharp guy. All about him. In that line last night, that 29-point line, when he was out of control, he had 8 turnovers. By the way, Rajon Rondo had 17 assists last night, 0 turnovers. Rajon’s got rings, Wall will never have one."

See, if we're talking about Wall as a rookie, it's hard to say anything original or interesting. Like with Wednesday night's performance, it's just, "obviously he had a triple double. He's going to have a lot of those in his career." In general, he's so obviously talented that gushing over his exploits already feels a little redundant.

It's why we end up speculating on Kobe Bryant's psyche, or LeBron James biting his finger nails and whether that means he's scared in crunch time. When the play on the court leaves so little room for interpretation, we have to go deeper to create a story.

That's what happens when Great becomes Normal. And it's only true of the Greatest.

Wednesday night I realized: Colin Cowherd was paying John Wall the ultimate compliment. He may have said he'd rather have Rajon Rondo, but his general reaction tells me something different. Except for some warmed-over lede involving Magic Johnson, there's no new angles that journalists can take with this guy. And that's the best sign that Wizards fans could hope for.

And what some of us have known all along, the rest of the world is slowly finding out:

John Wall is on another level. The sort of thing we only see once or twice a decade. Not Steve Nash, Jason Kidd-type stuff; Kevin Durant, Lebron James-type stuff.

That was from last year at Kentucky. This year, the legend is growing faster than ever.

I wonder what we'll write next year next week.