Erik Spoelstra Isn't The Miami Heat's Problem, But Firing Him Is Pat Riley's Only Solution

Through the summer and preseason, the Miami Heat set the stage for history this season, but if anything, we'll remember our 2010 predictions of greatness for their historical lack of perspective. And now, as Miami searches for a solution, the whispers about coach Erik Spoelstra's job security are getting louder and louder. So is Erik Spoelstra what's wrong with Miami?

Share All sharing options for: Erik Spoelstra Isn't The Miami Heat's Problem, But Firing Him Is Pat Riley's Only Solution

The Miami Heat have lost four of their past five games, and held a players-only meeting Saturday night, the textbook move for any team in freefall. A day later, though, we forgot about the players-only meeting and talk swirled around a video of LeBron James bumping into head coach Erik Spoelstra. Was it on purpose or just an accident? Should we consult LeBron's history of ambiguous shoulder-brushes?

...Nonsense, chaos, and vague, open-ended questions. This is what happens as empires fall.

That's where we are now with the Miami Heat, as the team that talked of winning 70 games or more this season (not to mention not one, not two, not three, not four, not five, not six, not seven championships together) now hovers barely above .500, and the rest of us are still in shock. Not necessarily at the Heat's struggles, but by how drunk we all got drinking the Heat's Kool-Aid. A bar that pledged free drinks for every Heat loss is staring at a $30,000 deficit.

The team looks woefully incomplete and perpetually out-of-sync, but in fairness, as we approach December, their greatest flaw of all is fading. Their appalling detachment from reality over the summer and throughout preseason gave birth to bold proclamations of greatness and predictions of historical dominance, but these days, that attitude's been replaced by a sober concession—"It is definitely going a lot slower than we all thought," LeBron James said this past week. "At some point we're going to have to figure it out."

It's spectacular to watch. Not because everyone's rooting for Miami's collapse this season, but because really, whatever happened with Miami this year was going to be special. They ensured that this summer when LeBron, Dwyane Wade, and Chris Bosh fed a spectacle unlike anything we've seen in sports. My mother, my sister, people in line at Starbucks, Barack Obama—they had the entire country talking about the NBA. That's the true barometer for a gigantic sports story. When everyone in your life has an opinion, you know it's big.

It's not just basketball at that point.

Even someone like Maureen Dowd, a New York Times columnist more apt to talk George Bush than Chris Bosh, had to weigh in on what she dubbed the Miami Hoops Cartel:

After the heady courting, the King changed courts.

And there were such loud howls about betrayal, disloyalty, selfishness, revenge and intrigue that it might have impressed even a Shakespearean court.

After seven years as the local hero, James should have shown more class than to let the Cleveland owner, coach and fans hear about his defection on TV, broadcasting from cosseted Greenwich to struggling Cleveland.

That's why the Heat are still worth our time at 9-8, firmly entrenched in the middle tier of the 2010 NBA. When anyone creates that sort of spectacle before even playing a game, no matter how the game turns out, the story's going to be fascinating. Failure, success, infighting, or us-against-the-world cohesion—whatever the story, they put themselves on such a gigantic stage that we can't help but take notice and derive larger themes and lessons from the ordeal.

The cliched term here is soap opera, but that doesn't do it justice. Soap operas are terrible and predictable and filled with manufactured melodrama. In Miami, it's much harder to ignore the show, mainly because it keeps changing, adding new layers.

In July it was a music video with bright lights, flashy colors, and absolutely no substance. In September and October, as ESPN descended on Miami to document their every move, the Miami Heat became reality TV. Then the Big Bad Best Team Ever stumbled out of the gates, and it became slapstick comedy to watch these cartoon villains fall on their face against real teams like the Celtics. But now we finally have the first true drama of all this. Will the Heat fire Erik Spoelstra? 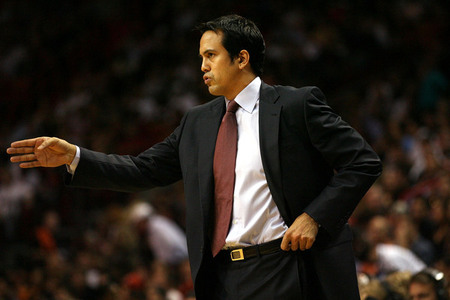 Whenever we talk about coaches getting fired, I come back to that one scene from The Wire's fifth season. Michael is sitting shotgun in an SUV, headed to an execution when he asks Snoop, "Don't y'all wonder whether he even deserve all this?"

The context of that scene gives Snoop's words even more weight. (***Spoiler alert*** If you haven't seen The Wire, skip to the next paragraph). Snoop was carrying out Marlo's orders to execute his mentor, Michael, a decision made without much choice. Because even if Marlo didn't really believed that Michael had been snitching, he couldn't be sure that he hadn't. So Michael was really asking about himself, set to be another casualty of a much larger machine. Except that Michael saw it coming, and had no other option but to kill another of his mentor, Snoop. It was his only next step. "Deserve" had nothin to do with it.

This sort of perverse cause-and-effect is often what happens with coaches. You could point to ten different problems with the Miami Heat, and maybe two come back to Erik Spoelstra. It's not his fault that Miami can't defend in the paint. Can't rebound or score on the inside, either.

Is it Spoelstra's fault that Dwyane Wade has shot 13-62 in Miami's losses this year?

Who could blame Spoelstra for struggling to coach a team whose two best players play the same position and freely admit to struggling with chemistry over the first month of the season?

Who could blame him? Other than Dwyane Wade's passive-aggressive criticism, I mean:

"Me and LeBron are going to continue to try to find a way with the game plan we have. We're trying to be effective. We have a great coaching staff; I'm sure they'll look at things and see how to utilize us a little better."

Even when he defended his coach a few days later to Yahoo! Sports, Wade undercut Spoelstra's authority as he said, "I never would put anything on the coach, win, lose or draw because they can give us the game plan, but they are not on the court playing. With this team, especially with the IQ of this team, we are smart enough to make adjustments on the floor. ... Now is the time to take ownership that this is our team, even though we respect our coaches for what they do." Coming from him, these messages are sort of perfect.

Because for all the symbolism of LeBron's intentional/accidental chest bump of Spoelstra, it's been Wade that's personified the Heat's struggles all year. He's the team leader, and the guy that convinced LeBron and Bosh to make this Miami dream team a reality. But he's also the guy who's struggled more than anyone, and bristled whenever someone has the audacity to point out just how pedestrian Miami's looked so far.

After the Heat's loss on opening night, Wade shifted the focus to skeptics, saying, "Sorry if everyone thought we were going 82-0." After a second loss to Boston: "We're the best 5-4 team in the league."

Then after the Orlando loss: "Orlando's supposed to win this game." Now this: "We have a great coaching staff; I'm sure they'll look at things and see how to utilize us a little better."

He's been whiny, indignant, dismissive, and—above all—pretty much terrible on both ends of the court for the first month of the season. Doesn't it sound like D-Wade needs to get kicked in the ass? 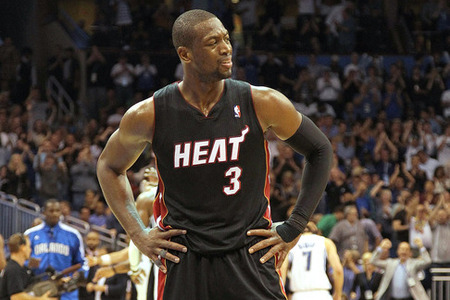 If you answer yes, then who does it? LeBron won't, and Erik Spoelstra can't.

Over the summer, when this team came together, Dwyane Wade fought to have the Miami Heat keep Spoelstra in charge. He'd proven himself with lesser teams, and Wade believed he could handle the added responsibility. So Miami didn't flinch coming into this season with a coach that's not yet 40 and looks like he's 25. He had Wade's approval, so Spoelstra was safe.

But that also means he's not really in a position to chastise Wade. And really, he can't do much to LeBron or Bosh, either. Because from a practical standpoint: how do you chastise someone that (obviously) has the power to control your professional destiny? If LeBron bumped him on purpose, it's more an indictment of Spoelstra for allowing it to happen.

But even if he had flipped out... Well, let's put it differently: if you're Dwyane Wade or LeBron James, how do you take someone seriously if you so obviously control his professional future?

Sources tell ESPN that the Heat players have begun to question Erik Spoelsta's leadership. And that much is obvious to anyone that's read Dwyane Wade's quotes recently. And so we have the first real drama of this Heat season, and it's as rich and nuanced as you'd expect from a story this good. Miami needs new leadership, but it's not Erik Spoelstra that's the problem, it's Dwyane Wade, the real leadership in that locker room. Spoelstra's problem is that he can't fix it.

The recent Michael Jordan/LeBron James mashup that's been making the rounds features Jordan speaking to basketball's next generation, and it's all too perfect when the fake ad tells LeBron:

Maybe it's my fault. Maybe I led you to believe it was easy, when it wasn't. Maybe I made you believe my highlights started at the free throw line, and not in the gym. Maybe I made you think that every shot I took was a game-winner. That my game was built on flash, and not fire.

Maybe it's my fault that you didn't see that failure gave me strength. That my pain was my motivation. Maybe I led you to believe that basketball was a God-Given gift, and not something I worked for... Every single day of my life. Maybe I destroyed the game.

Or maybe, you're just making excuses.

...But doesn't the message fit Wade even better? You know, the Heat superstar that's actually endorsed by Jordan Brand, and the guy that's made more excuses than anyone through this first month.

Maybe it's not Michael Jordan's fault, though. Or Wade's. Or Spoelstra's. Maybe it's nobody's fault, and everybody forgot that for every great player, there's been a voice around to deliver Jordan's message every day. Even Jordan himself needed Phil Jackson around to reinforce those lessons.

Fair or not, Erik Spoelstra's not going to be Phil Jackson for Dwyane Wade and the Miami Heat. From a coaching standpoint, it's totally unfair to blame him for all the Heat's problems this year. But as Miami searches for a solution, the fresh-faced Spoelstra—unconvincing as an authority figure, on the sidelines only after receiving a vote of confidence from the superstars in his midst, and—can't play that role. And as the drama unfolds in the next few days or weeks and we wait for a resolution, we go one more time to The Wire:

Avon Barksdale: "What's up playboy? Why you wearin' that suit? For real, it's 85 degrees out here and you tryin to be like Pat Riley."

Proposition Joe: "Man, look the part be the part, motherf***er."

Now, as Miami's struggles continue and the options get more narrow, President Pat Riley's about to play Marlo's role in casting off a mentor and maybe Prop Joe's, too. Because whether it's Pat Riley or someone else, Miami needs someone that can look the part and be the part in the eyes of the Heat superstars. And whether he deserves it or not, that means Spoelstra has to go.