Quicker And Faster Than We Thought Possible, John Wall Arrives

Share All sharing options for: Quicker And Faster Than We Thought Possible, John Wall Arrives

We're in the third game of the John Wall era, and already, he looks like this. Tuesday night's Wizards-Sixers game was billed as a meeting of no. 1 and no. 2, but by the end of it, the notion of any rivalry seemed laughable. 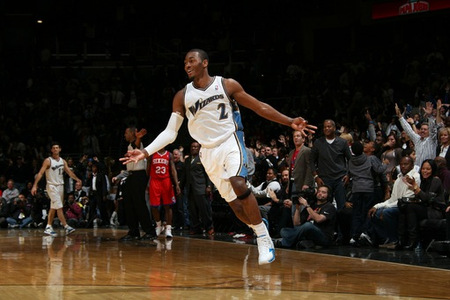 Wall had nine steals last night, and I swear to God, at least six of 'em came from Evan Turner. Just cruel, obvious pickpocketing. It was uncomfortable. I said to a friend, "Why won't somebody step in? They're destroying Evan's self-esteem. Doug Collins! Put a stop to this!"

And since the Wall-Turner angle cannot be discussed further without slandering Turner unnecessarily, let's just move on. For more on the rookie meeting, read Mike's report from last night's game. But this wasn't about the NBA's first meeting between Wall and Turner. It was about John Wall's introduction to the NBA.

I was there last night, and came into the Wizards' first home game unreasonably giddy about the future. With John Wall, we may not win 50 games, but at least 50 of our games will be legitimately exciting. And watching him knife through defenses, quicker and faster than anyone on the court by a longshot, it's sort of reassuring. We may not be there yet, but we've got John Wall. Things are moving in the right direction.

So if you're looking for someone to temper the expectations surrounding Wall, go somewhere else. I've been proselytizing since day one at Kentucky, and he just keeps exceeding expectations. It won't be a flawless flight to the top, because it never is, but Wall's trajectory is pretty obvious by now.

Coming into 2010-11, there were questions about how quickly Wall could find his legs in the NBA. How well could his game translate? How much will his shooting hurt him? Can he be a leader? Can he work together with Gilbert Arenas? And the Wizards may not be perfect—had Andray Blatche not been bailed out in overtime with a foul on a verrry clean-looking block by Elton Brand, they probably lose—but as far as John Wall, he's about as good it gets. He can get to the rim at will, he can turn guys like Nick Young into scorers, and on defense, he's a lock to average 2.5 steals-a-game. We're a week into the season, and already, all the Wall questions seem silly. For the Wizards, John Wall is the answer.

And for the rest of the NBA, he's about to be a serious, serious, problem.