Kobe Bryant's Triple Double Sinks The Kings, And Nobody Notices

Share All sharing options for: Kobe Bryant's Triple Double Sinks The Kings, And Nobody Notices

Kobe Bryant scored 30 points, had 12 assists, and grabbed 10 rebounds in L.A.'s win over the Sacramento Kings last night. And even though it happened while half of America was sleeping and the other half was ignoring the game, because "obviously Kobe will beat the Kings," it's time to talk about Kobe. 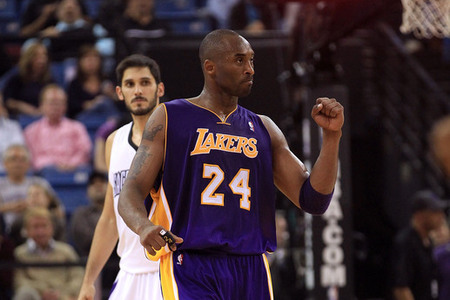 He's not Michael Jordan, and for nearly a decade, that's been the first thing out of someone's mouth when they talk about Kobe. Either that, or "Colorado". But I was talking to someone yesterday about Jay-Z, and how he's been so good, for so long, that he's almost underrated. And as I was trying to explain Jay, I realized: He's just like Kobe Bryant.

Like Kobe, Jay has spent his career performing in the shadow of a giant (Notorious B.I.G.), but as time has passed, he just keeps on making hits. And it's the same with Kobe.

Who knows how long this will continue, but it bares mentioning that Kobe Bryant has been arguably the deadliest scorer in basketball since the year 2000. And as the challengers--Allen Iverson, Carmelo Anthony, Kevin Durant--have come and gone each year, Kobe remains at the top. We take him for granted, almost. As if this is the role Kobe was always meant to play, and he just reflexively dominates this way. And while that attitude is its own testament to Kobe's greatness, we don't always say enough about just how great he really is.

Tuesday night, John Wall nearly had a triple double, and I compared him to Jesus.

Wednesday night, Kobe did have a triple double with 30, 12, and 10, and most of us won't even bat an eye. By now, we're used to it. There's Kobe out in California again, just quietly putting together a resume that's completely baffling. It's become so ordinary, we don't even stop to ask, "How long can he keep this up?" Because Kobe dominating just feels so inevitable. And it totally is. Which is why he's underrated, and we should savor this while it lasts.