Best NBA Free Agent Signings Of 2010: Did The Knicks Win With Amar'e Stoudemire?

Amar'e Stoudemire is off to a wonderful start for the Knicks. But was it a better free agent move than the Heat's acquisition of LeBron James and Dwyane Wade?

Share All sharing options for: Best NBA Free Agent Signings Of 2010: Did The Knicks Win With Amar'e Stoudemire?

The New York Knicks went to great, great effort to clear as much cap space as possible ahead of 2010's NBA free agency period, with LeBron James the team's top target. It became clear rather quickly that the Knicks weren't at the top of King James' list; to improve their bid and ensure that the franchise wouldn't be left empty-handed at the end of the summer, the Knicks quickly gave Amar'e Stoudemire more money than his old team, the Phoenix Suns, or anyone else was willing to spend.

Injury concerns weighed; Amar'e, after all, is a microfracture survivor and wears goggles because one more poke to his eye could severely damage his sight. There were also very, very real worries about Stoudemire's inconsistent (or just plain bad) defense, non-elite rebounding and (potentially overblown) history of attitude problems.

Needless to say, no one in New York, Phoenix or anywhere is concerned about any of that right now.

Amar'e has led the Knicks to a 14-9 record. By comparison, the Knicks were 8-15 at this point last season. Teams outscored New York by 3.8 points a game a year ago; this Knicks team has a +1.7 points per game differential. Stoudemire isn't the sole reason (we'll discuss another boost below), but he's a big reason, and well worth the $16.5 million the Knicks will pay him this season.

Of course, four years and $83.5 million in guaranteed salary will remain on Stoudemire's deal after this season; that's where New York relies on chance and continued success. Amar'e will turn 32 at the start of the final season of the deal. Can he be this successful at that point? We'll see. In the meantime, he's certainly one of the best free agent signings of the vaunted 2010 summer. 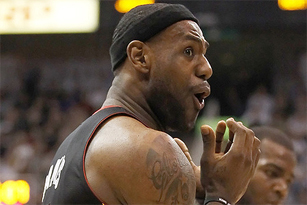 It is impossible to ignore the giant elephants in the room nightclub when it comes to 2010 free agency -- James and Wade were the big prizes on July 1, and even though the Heat have already lost more games than some thought they'd lose all year, it's impossible to argue that LeBron hasn't been highly productive and that Wade isn't back on the path to wreckage.

Note that each of the Heat stars will make less than Amar'e or Joe Johnson in every year of their respective deals. Even though some, uh, coordination was involved, these are two free agent signings that may go down in history as the most impactful ever.

Would Boston have committed to Allen and Pierce if the Celtics hadn't made it to the Finals? That's a fair question, especially considering that Boston was said to have been shopping Ray at the deadline in hopes of adding a powerful scorer. (Kevin Martin was a popular rumor; the Rockets scooped him up instead.) Pierce, one of the greatest Celtics ever at this point, was less than likely to leave in free agency. But don't rule out what a disappointing playoff run could have done to Danny Ainge's thinking on how much steam his core had left. In the end, Boston kept them both, with Allen's short-and-sweet deal looking like an outright steal. As the Celtics lead the East, their summer of maintenance looks brilliant.

I could copy and paste the Celtics' entry here. The Mavericks had no concerns about Nowitzki going forward, and Dirk liked what Dallas planned to do. There wasn't much progress in free agency for the Mavs, other than a looking-really-bad deal to Brendan Haywood; a key trade for Tyson Chandler, however, has paid dividends, and everything is lovely in Big D.

Steal of the offseason, small potatoes division: Brown at just over $2 million a season. After grabbing Steve Blake and retaining spiritual adviser Derek Fisher, the Lakers could only justify keeping one of Brown or Jordan Farmar. With some help from a liberty-seeking Farmar and the Nets, the Lakers made the right choice. Brown is a serious early candidate for Most Improved Player. If there's one problem with the contract, it's that Brown has a player option for 2011-12, one I imagine he's likely to decline. His pricetag will go up, and the Lakers may have to stretch their wallet to keep him. 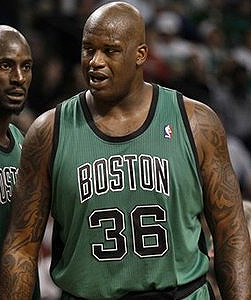 Steal of the offseason, small and really old potatoes division. Shaq has been so masterful in a small but vital role in Boston that some fans calling for him to be an All-Star. (Zach Lowe has an appropriate response.) Like Brown, O'Neal has a player option for 2011-12. Unlike Brown, Shaq has made a ton of money and would rather win than find the biggest deal out there. So this very well could turn into two seasons of discount excellence for the Celtics. Brilliant move.

Felton was the second major addition to the Knicks, and the upgrade over what Mike D'Antoni has had to work with in New York has been ridiculously obvious. As Brandon Jennings once told dozens of fans watching him talk to Joe Budden on the Internet: Chris Duhon ain't getting it done. Felton has thrived in the up-tempo pick-and-roll with Amar'e, and the defensive drop-off from Duhon (who fell out of favor pretty quickly last season) hasn't been noticeable. Kudos to Donnie Walsh for realizing how badly Amar'e and the gunner crew (Danilo Gallinari, Wilson Chandler) needed a heady point guard; this was money spent well.

The Blazers lobbed another attack on the Utah Jazz by offering Matthews big bread; the Jazz retreated and ... well, I'm still not sure Utah regrets letting Wesley Jr. go. He's much better in Portland than he could have been in Deron Williams-dominated Salt Lake. Matthews has lived up to his contact so far, with almost 15 points a game in just 27 minutes as Nate McMillan decides how to appropriately use Matthews, Nicolas Batum and Brandon Roy together. (In fact, doesn't Matthews seem like a cross between Roy and Batum? Or is Roy a combo of Matthews and Batum? Hard to decipher, but trust me: they are not at all dissimilar.) Matthews looks like a better investment than the comparable Milwaukee's John Salmons, and at a cheaper price and younger age.

Bosh can't rank with LeBron and Wade, certainly; he simply hasn't had and likely won't have the impact the two superstars will, barring injury. That said, let's not pretend Amar'e or Dirk would be averaging 25 points a game if they had to share the ball with King James and D-Wade. They wouldn't, and Bosh's goals ought to be rebounding, defending and scoring the possessions he soaks up. He's doing two of those items (rebounding and defending) below his standards right now, but given that he's had the largest adjustment forced on his game, it's understandable that it will take him time to acclimate. (Given that the Heat have the No. 3 defense in the NBA, it's hard to fault him too much.)

There were some chuckles when T.T. took home $8 million per season, but he's lived up to it ... and more. Thomas has been strong on the boards for an otherwise undermanned Charlotte frontline (16 percent rebound rate), is blocking shots at a wonderful clip (6.3 percent) and is scoring efficiently for the first time in his career (.595 True Shooting percentage). He's playing just 20 minutes a game, but he's making those minutes count, and making Michael Jordan's dollars earn.