Mapping Why The Heat, Celtics, Spurs And Lakers Are NBA's Best Teams

A visual presentation of which NBA teams play the best/worst offense and defense reveals that the Miami Heat, Boston Celtics, San Antonio Spurs and L.A. Lakers are in a class of their own.

Share All sharing options for: Mapping Why The Heat, Celtics, Spurs And Lakers Are NBA's Best Teams

For me, visualizing data spatially is much more helpful than looking at a list of numbers. Certain data interpretation works just fine in list or chart form -- you don't need a fancy graph to understand a player's points, rebounds and assists per game -- but in many cases, organizing the data graphically opens up new understanding.

This bit in particular is cribbed from Kyle Whelliston of The Mid-Majority, who along with being a champion of writers, first struck up the idea of scatterplotting offensive and defensive efficiency ... at least to my knowledge. My work isn't as pretty, but it follows the same ethos. 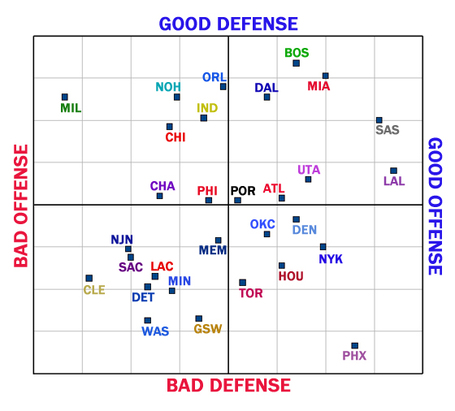