Carmelo Anthony Trade Rumors: Be Careful Who You Trust

Share All sharing options for: Carmelo Anthony Trade Rumors: Be Careful Who You Trust

On Sunday, ESPN's New York-based Chris Sheridan reported that Carmelo Anthony had essentially chosen the New York Knicks, with sources telling the scribe 'Melo would sign a contract extension this season only if he were traded to the Knicks. Not if he stays with the Denver Nuggets, not if he were traded to the New Jersey Nets or Houston Rockets. Knicks, or nothing.

Immediately, reports out of Denver refuted Sheridan's scoop. Sheridan took to Twitter to defend his work and implore readers to believe him. 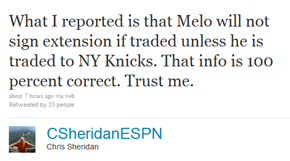 Come on guys, trust him. But before you do, check out the other two superstars he has reported the Knicks were going to get.

Back in 2007, Kobe Bryant wanted to be traded by the Lakers. He may or may not have formally demanded a trade; he certainly ripped the team's decision to hang on to ingenue Andrew Bynum instead of shipping him to New Jersey for Jason Kidd. The Bulls were the team on the front burner for the entirety of Kobe's life on the trading block, mostly because they had some good young players and because Kobe, who had a no-trade clause, wanted to play in the Windy City for Scott Skiles.

But Sheridan? He thought the Knicks -- coming off a 33-49 season, with Isiah Thomas still in charge -- could get Kobe. Seriously. From a June 2007 Insider blog post by Sheridan:

If that trade request ever turns into a trade demand, there's a good case to be made that Kobe will end up with either the New York Knicks or Chicago Bulls. [...]

If Chicago is one of the logical places for Bryant to end up, that raises the question of which team could make a competing offer. That's where Knicks coach and president Isiah Thomas would come in.

I've known Isiah a long time, so trust me when I tell you he would go to the end of the earth and do whatever it takes to get a deal like this done. He wants his legacy to be something special in New York, and Kobe Bryant could help assure that. Furthermore, Bryant has previously expressed interest in lighting up Gotham.

Sheridan then suggests that the Knicks could get the Lakers to pull the trigger by offering Channing Frye, David Lee, Jamal Crawford and a couple picks. I'm not making this up.

Kobe ended up withdrawing whatever trade request he had made; the Lakers traded for Pau Gasol, and the rest is history in the making. But soon there would be another superstar the Knicks would totally grab: LeBron James.

By July 4 this past summer, LeBron had already met with the Knicks. The meeting was reported to be a sad affair, and just about everyone wrote New York off at that point, including Yahoo!'s ace reporter Adrian Wojnarowski:

Sources say one team that all but eliminated itself with James in the presentation process was the New York Knicks. James met with the organization on Friday and his inner circle has described New York’s presentation as lacking preparedness and organization.

But a day after Woj's report, Chris Sheridan kept the hope of the Knicks' faithful alive.

There are a lot of opinions out there today about who is supposedly in and out of the LeBron James sweepstakes.

Some have already written the Knicks off, and some have weighed in with actual facts about what took place in their meeting Thursday with James.

I am here to tell you that I believe the Knicks are still very much in the race, and I've gathered a little intel of my own regarding what went on behind those closed doors off 9th Street in Cleveland.

The Knicks were, of course, not in the race at that point.

And now, we're supposed to believe Anthony will only sign an extension with Knicks? Trust him? Pffft. I have no clue whether 'Melo will be the crowning jewel in Chris Sheridan's Holy Trinity of Invisible Knicks Superstars, but his record of accuracy on similar matters is not great.

I suffix this by noting I have all the respect in the world for Sheridan, a breathless hard-worker and, by all reports, a good dude.