Celtics Vs. Knicks: Should Amar'e Stoudemire's Buzzer Beater Have Counted?

Share All sharing options for: Celtics Vs. Knicks: Should Amar'e Stoudemire's Buzzer Beater Have Counted?

The Boston Celtics escaped with a 118-116 win over the New York Knicks last night after Paul Pierce's game-winning jumper, but there was more intrigue once the game ended. With 0.4 seconds left, Amar'e Stoudemire swished what would have been a game-winning three-pointer, but the referees ruled that the shot came after the buzzer.

On the surface, it was an easy call to make. As you can see here, Stoudemire clearly still has the ball in his hands when the red light is on. 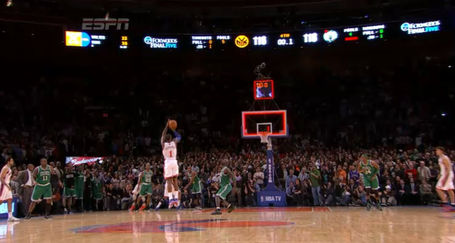 But there's an entirely separate issue at play here. As Matt Moore of CBS Sports notes, the Knicks probably should have had more than 0.4 seconds. As this picture indicates, Pierce's shot went in with 0.6 seconds left, not 0.4 seconds. That would have given the Knicks enough time for Stoudemire to get this game-winning shot off. 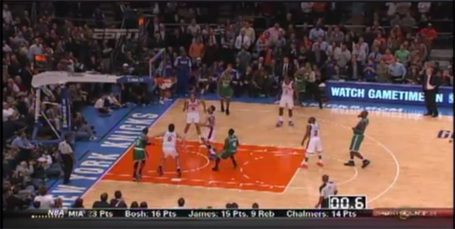 Granted, it's a difference of two-tenths of a second, so it's hard to really blame the scorekeeper for not doing their job. However, you'd think there would be a review on the court to give the Knicks the extra 0.2 seconds back. Had that happened, maybe Stoudemire gets that game-winning shot off in time, and maybe we're talking about the Knicks as the team that proved the most in this showdown.

As it stands, Stoudemire's game-winner was just a tease, as SB Nation's Knicks blog Posting and Toasting writes:

It's been over half an hour, I've taken my postgame shower, and I'm still a wreck. I think Joamiq summed up how a lot of us felt after that ending. Had Paul Pierce's game-winning step-back J been the end of the story, I'd be okay right now. It was a bummer, but I saw that one coming. What I didn't see coming was a spot-on Amar'e Stoudemire three that sent me into a screaming, windmilling frenzy before I realized it was launched well after the buzzer sounded. The human nervous system is not equipped to deal with such an emotional swing.