From Cleveland To Miami And Back: LeBron James Is The 2010 Sportsman Of The Year

Share All sharing options for: From Cleveland To Miami And Back: LeBron James Is The 2010 Sportsman Of The Year

Thursday night, LeBron James returns to Cleveland for the most anticipated game of the NBA season, and it will almost certainly be the highest-rated NBA broadcast of TNT's year. For one night, the eyes of the entire sports world will follow LeBron's every move, every word, every success, and every failure. Again.

You may hate him for this, but for the past 12 months, LeBron James has captivated America's attention like no athlete on the planet. And if you do hate him for it, he doesn't seem to care.

That makes you hate him even more.

You may say he's never won a championship and the Heat are all talk, but that doesn't seem to matter. You'll still watch him play Cleveland tonight, won't you? And that makes you hate him even more. In a more lucid moment, you may think to yourself, he's just a 25 year-old kid. A kid that's taken advantage of the opportunities to exploit his fame and build his fortune alongside friends. "If anything, WE created this monster," the lucid-you would say. But somehow, that makes us all hate him even more. "We're not the problem," our heart tells our mind. "HE IS."

Earlier this week Sports Illustrated named Drew Brees its 2010 Sportsman of the Year. And somewhere toward the beginning of Tim Layden's sprawling dedication to Brees, he writes "Maybe the idolization of athletes has always been a lousy idea, but the concept will not die soon or easily."

He's right. In the most basic way possible, the idolization of athletes is always a lousy idea. But never has that truth been laid more bare than in 2010, thanks to LeBron Raymone James.

Even before he left Cleveland this year, in their more honest moments, Cleveland fans would have admitted that idolizing this statue of false bravado was probably a lousy idea. He grew up in Ohio, but wore Yankee hats everywhere he went. He talked in the third person. He wilted in big games. He was more interested in mimicking Jay-Z than Jordan. The red flags were all around us, but like the people of Cleveland, we mostly disregarded them.

Not until 2010 did our suspension of disbelief look so obvious and idiotic. After 18 months of speculation as to which city might be lucky enough to land LeBron James, it all crested with his historically narcissistic appearance on ESPN to announce The Decision, and we realized how foolish we'd been in putting him on the pedestal in the first place.

"This is very tough," LeBron said after he announced plans to leave his hometown Cavaliers. "Because you feel like you've let a lot of people down. You've raised a lot of people's expectations also. But it was a tough decision, because I know how loyal I am."

The sentiment might resonate better if it hadn't been James himself that raised expectations for Cleveland fans. Because, they thought, he couldn't possibly go on national TV to break their hearts in the most spectacular way possible. When he did exactly that, it let everyone down more than any of them could have imagined. The sort of thing so phenomenally callous that it takes time to register in full.

And right after he defended his loyalty that night, the next question from James' handpicked interviewer was about his new home. More specifically, the coach at his new home. "Erik Spoelstra will be the coach," he said. "And Erik is a great young coach. I respect Coach Spoelstra and everything he's going to do to try to put us in the right position to win it all."

A few months later in 2010, and Chris Broussard—the Miami reporter with close ties to LeBron's inner circle, and the first to break the news of both his free agency Decision (the show) and his free agency decision (Miami)—magically files a report full of anonymous quotes about the Heat players' waning faith in the coach that Loyal LeBron respected so much in July. Ask Erik Spoelstra, maybe: The idolization of athletes is always a lousy idea.

So how could LeBron James possibly be the Sportsman of the Year? 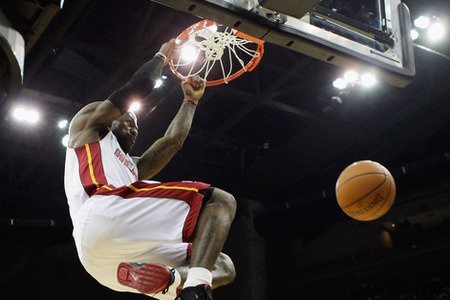 Because nobody's made us care as much about sports, in as real a way, as LeBron James.

Outsiders might call it ugly from afar, but the near-universal backlash against LeBron has been sort of refreshing. For all the ambiguity of modern-day professional sports and our nation's gentle, subconscious fluctuations between moralist and moral-less, it's been sort of great to have everyone stand up and say, "Okay, well we can all agree that guy just SUCKS."

The source of the backlash seems negative, and LeBron himself even posited that race may have played a factor in it. But that's not quite right. The backlash itself is obviously filled with bile and hate, but it stems from a shared understanding that everything we've been sold by the most talented basketball player on earth (and his team of marketers, obvs) the past twelve months has been an absolute sham. In other words, fans don't like LeBron because they love sports, and LeBron briefly turned the sports landscape into something we barely recognized anymore.

It's not entirely LeBron's fault, and he's still healthy and 25 years old, with at least a decade left to mold his legacy. But in 2010, fair or not, he unwittingly cast himself as the biggest villain in sports, and his nauseating turn in the spotlight forced us to re-think what's "cool" in sports.

Because while the idolization of poorly-educated, inevitably spoiled athletes has always been a lousy idea, as Tim Layden says, we do it anyway. We put people on these pedestals because heroes are hard to find, and the collective worship of an athlete makes these mythical virtues seem a little bit more possible for the rest of us. But it's not real, and if you look closely at the facade for long enough, cracks are unavoidable.

In the past decade alone, Sports Illustrated's Sportsmen of the Year have included such luminaries of virtue as Tiger Woods, Curt Schilling, Dwyane Wade, Lance Armstrong, Michael Phelps, and Brett Favre. I mean... Without tearing at the cloak of every legend put forth for worship by Sports Illustrated or anyone else, it's fair to say that we have a tendency to embellish these things. 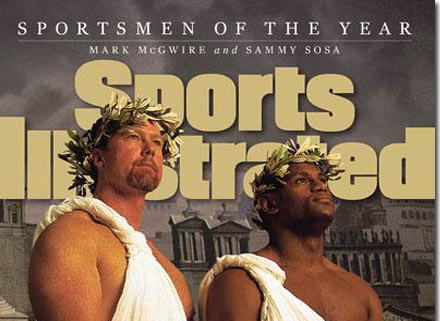 What LeBron did this year, though... All of this has actually happened. No embellishment necessary.

His blatant disappearing act against the Celtics in this year's playoffs. Then the press conference after that game, where he blamed himself—not for playing poorly, but for playing so well in other games that he'd "spoiled" us and created unrealistic expectations among fans and media. A few weeks later, there was the media tour during the NBA Finals, when, while Kobe Bryant chased his fifth ring, LeBron met with Larry King. And of course, the free agency whirlwind and his ESPN special, which speaks for itself by now. Although as ridiculous as that spectacle seemed, everyone always forgets about the welcome party/rock concert/victory parade they held in Miami a few days afterward.

Later in July, we got the outstanding LeBron-in-Vegas story from ESPN. Until, an hour after it was posted, the 2,000-word glance into his world mysteriously disappeared. As the season approached, we finally heard LeBron play the race card. Around the same time, we found out ESPN would create its own bureau dedicated to covering his new team. When he shared some of the racist messages he receives on Twitter, his attempt to play the victim came off ambiguous at best, and attention-starved at worst. Now, the Heat have stumbled to a 11-8 start before his triumphant return to Cleveland, just to ensure everyone finally understands exactly how ridiculous this charade has been all along.

But that's the thing—we've known all along, and each twist in the Year of LeBron has only made us more certain. Some might sneer and call the collective disillusionment a sign of the times, but those sneers miss the point. While LeBron's hopelessness has been the biggest story in sports this year, the reaction gives us reason to be hopeful. A sign that the times aren't as bad as LeBron would make them seem.

Sports may be inherently artificial and our heroes fleeting, but it's not THAT. It's not 25 year-old, ring-less LeBron James parading around TV like some basketball deity, expecting the world to bow to him at every turn. And as the boos follow him everywhere he goes and his status as surefire Hall-of-Famer and NBA Champion seems more uncertain than ever, it's been a moral victory for a nation of fans that knew better than to worship the guy that nicknamed himself King James.

All things considered, LeBron's been the most rewarding story in sports this year.

By exaggerating everything that's wrong, LeBron's 2010 forced us to appreciate complicated, imperfect heroes like Kobe Bryant and Kevin Garnett. Or even someone like Mo Williams in Cleveland. Thanks to LeBron James, we've taken solace in these people. The ones that just want to play sports for the sake of playing sports; not the ones looking to become a global icon. At least for this year, we're not looking for the next Michael Jordan. Starting with the Cavs tonight, whoever's playing the Heat will do just fine in the hero role.

So as you think about the Sportsman of 2010, ask yourself: Who has given us more to cheer about than LeBron James? Yeah, Drew Brees may have united a fallen city. But LeBron, by abandoning a fallen city of his own, united the whole goddamn country.

Whose 2010 will you remember more? 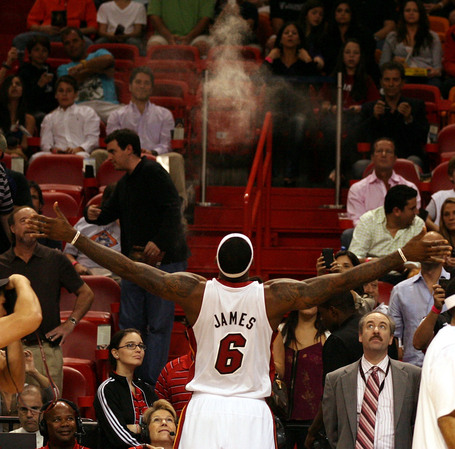 RELATED: Relive LeBron's surreal 2010 through the eyes of writers that made it so much better.