Will LeBron James Toss All That Powder In Cleveland Tonight?

Share All sharing options for: Will LeBron James Toss All That Powder In Cleveland Tonight?

There's a sea of anticipation for tonight's Cavs-Heat game, but amidst all the excitement, it should be noted: we really have no idea what we're excited about. We don't even know whether the Cleveland fans are going to boo LeBron or laugh at him.

(Note: laughing would be seriously lame).

One concrete point of speculation, though? We all want to know whether LeBron James will do his trademark powder toss at center court before tip-off. And, you know, as a corollary, whether it will get him killed. For what it's worth, LeBron says he "probably" will do his contrived little routine, and if nothing else, at least it's spawned this Kanye-themed parody: 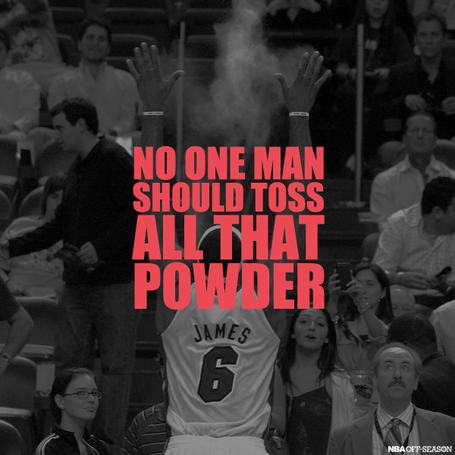 Meanwhile, Kevin McHale just hopes it's not anthrax. Hey, what does Shaq have to say about this?

Aside from just the thought of Shaq uttering the phrase, "I'm anxious to see him to the powder s—", it's also nice that the Celtics are all betting against him. Good to see the rest of the NBA respects Bron's manhood like that.

Although, in fairness to LeBron, it would be a pretty outrageous show of disrespect, showing complete disregard for the sensitivity of Cleveland fans and his own image. In other words, he's definitely going to do it. And in that case, I think I'm on Scott Raab's side with this one:

I'm inclined to vote against any form of physical violence. But if the Whore of Akron walks out on the court and tries his little chalk-toss routine at the Q tonight, I hope a Clevelander has the guts to toss a drink into his face.

And listen, as much as we'd all like post clips of Major League 2 all day long, LeBron-as-Jack-Parkman isn't that great of an analogy. But powder-toss-as-shimmy? Well, if the shoe fits...