The biggest question on everyone's mind as LeBron James makes his return to Cleveland for the first time is how Cavaliers fans will react to him. Will they boo? Will they laugh? Will they chant derogatory things? Will things get ugly?

The truth is that nobody knows. We know the team is taking extra security measures, but let's be honest: how much will that actually help? Cleveland fans are still going to be upset, and they're still going to show that anger in whatever way they can. Even president Barack Obama admitted that tonight is going to be "brutal" for LeBron.

For example, check out this list of chants that Cavaliers fans at CavsChants are planning on doing. They include the following:

Also, some Cavaliers fans held a Celebrity Roast for LeBron last night, featuring everything except, you know, LeBron himself.

And then there's one Cleveland design firm that used to be partners with James' marketing firm. Now, via Bloomberg, they're selling a bunch of anti-LeBron swag, including this beauty. 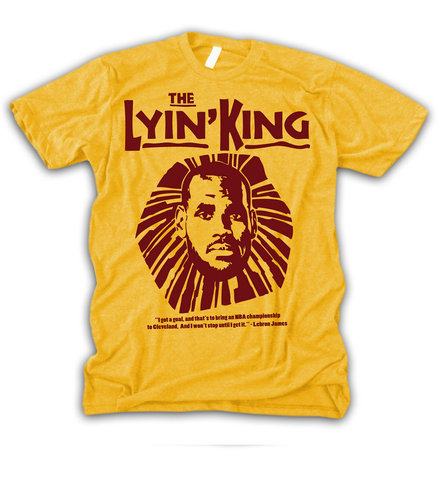 And then there's the whole movement to laugh at LeBron instead of booing him, which is fun in theory but pretty dumb in practice. How are you going to get 20,000 people to laugh at someone all at once?

You'd think, amid all this, that Cavs bloggers would be stroking the fire. But SB Nation's Cavaliers blog Fear the Sword is instead sad.

I know I am pissed, angry but I know I am saddened as well.  LeBron James had it all and threw it away.  You can almost see it on his face, a wish to go back in time and do it all over again.  He went from being a partner with Dan Gilbert in building the Cavaliers to nothing more than a player.  Another guy on a roster filled with stars, on a team that, as built, cannot beat the better teams in the NBA.

That's sad.  Sad that LeBron James has given up everything that made him LeBron James - the fun, his game, the smile - just to get away from the pressure of playing close ot home, or of being 'The Man'.

I don't know what is going to happen tonight, and I am hoping Cleveland fans do themselves and the city proud, but for a moment, during introductions, when the boos, laughs, jeers, chants are raining down over James and the Heat I will look into his eyes and see the same thing I am feeling.

Sadness.... About what could have been.

It's an interesting perspective, and probably not that unique. But for one night, I'm guessing most Cleveland fans will be angry before they are sad. On Twitter, owner Dan Gilbert made one last plea for sanity and peace.